The PQ, the NDP and Resistance

The Gazette’s Don Macpherson (or D Mac, as I never call him) has a nice read today about the connections between the Parti Québécois and the Reseau Résistance du Québecois, a proto-separatist group that does things like protest the Queen and Paul McCartney and such.

Anyway, the RRQ recently sent out a series of letter to contributors to the Liberal Party of Quebec—specifically, those who contributed the maximum amount ($3000). The letter is printed à-la-FLQ Manifesto, gun slinging Patriote watermark and all, and contains some threatening language.

It informs you that your name and address have been posted on a website identifying you as someone who last year contributed the legal maximum of $3,000 to the Quebec Liberal Party.

It declares you “a target” for anybody who wants the Charest government either to hold a public inquiry into the construction industry and political financing or resign.

It is only when the government has done so that the website will be closed and “you will find peace again.”

Don also talks about how the RRQ always seems to be doing the PQ’s dirty work. “To my knowledge, the only mainstream parties in Canada willing to associate with extremists such as the RRQ are the PQ and its federal ally, the Bloc Québécois.”

I would humbly add another name to that list: the New Democratic Party. Tom Mulcair, the NDP’s lone MP in Quebec, made a lot of noise denouncing Bill 103, the language law that ‘fixes’ Quebec’s law on English schooling. Like the PQ and Bloc, Mulcair claimed the law allowed backdoor access to English school for those who could pay for private school for a few years. And, like the PQ and the Bloc, the NDP was a sponsor of an anti-Bill 103 concert this fall—along with the RRQ. (See bottom right of the poster, below) 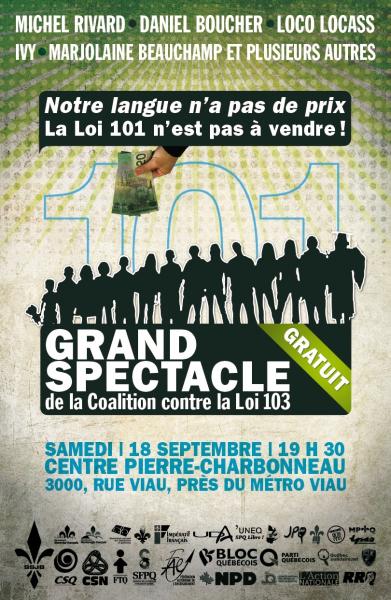