The community food centre transformed a Toronto parking lot into a feast for the senses--and taste buds. 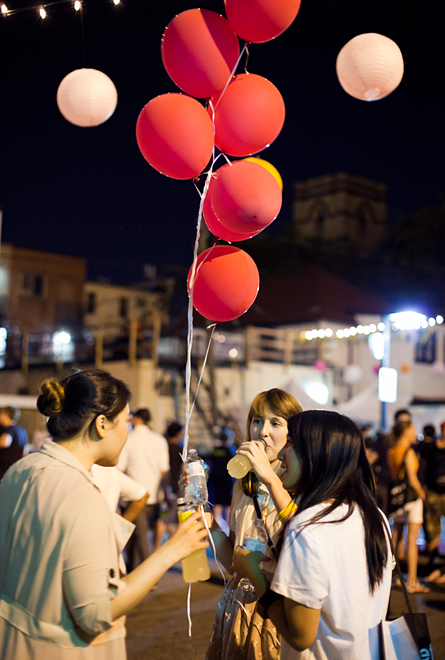 I was one of the first to arrive on Wednesday evening to the Stop’s night market; an all-you-can-eat feast provided by some of this city’s most exciting restaurants with proceeds going towards the community food centre’s anti-hunger programs. The event, which sold out in three days, paired 27 food and drink vendors with 27 design teams–from established designers like 3rd Uncle Design and Brothers Dressler to Ryerson’s Department of Architectural Science— who created whimsical food booths that transformed the alley and parking lot beside Honest Ed’s into a spectacular market space.

Nick Saul, The Stop’s Executive Director, got there early too. He was already lined up at Hawker Bar’s booth to sample one of their son-in-law eggs before I began my indulging. “Tonight is going to be wild and awesome,” he said, waiting for the deep-fried soft-boiled egg with chili jam.

Although that pretty much sums it up, indulge me while I share a few details.

After 30 minutes of sampling dishes, I had a stomach ache. I pulled myself out of the crowd, had a glass of water, and quietly observed the professionals from the sidelines, who braved the near-suffocating heat with aplomb. They were of every age and every ethnicity. There were girls in maxis and minies, sandals and platforms, guys bro-ing down in ball caps and t-shirts, and mothers with sleeping babies hanging in slings from their chests. Most would grab a bite from a booth with a smaller line and then start corralling into a longer station’s line, so that they were never without food. They also put off sweets until after they’d had their savoury fill. All very smart moves.

At precisely 8:27 p.m.–when the crowd peaked in size–I went back in for more and joined the longest line to sample Yours Truly’s deep-fried dough stuffed with ground pork in xtan spice, iceburg lettuce and a drizzle of lemon yogurt dressing. By 8:45, I was wiping my hands on my pants and moaning. I’m still thinking about that thing, which they called a hamburger. And those wild boar meatballs, too.

The 800 plus people, who paid $50 each to attend, all seemed pretty satisfied. “It feels like a free-for-all,” 26-year-old Corey Caplan told me. “Even though we bought tickets.” Another guest said: “It’s a fundraiser but there’s nothing onerous about being here. It’s like the ticketholders forgot that they paid.”

Therein lies the magic behind the Stop: the organization is so tapped into the foodie zeitgeist and have strategically figured out what that community wants, that contributors forget they’re donating to a charity that last year raised enough funds to provide over 55,000 meals at their drop-in and allowed over 1,100 children to participate in their education programs. Plus, the restaurants get free advertising and align themselves with an admired cause.

Once the crowds thinned out, you really got to glimpse the sense of camaraderie among the food and drink vendors: chefs visited other stalls to taste their colleagues’ treats and had a much-deserved cold beer. The sous chef at Bellevue in Kensington Market, Maxime Leblanc, told me that their stall ran out of food at around 10:00p.m. “We served at least 1,200 oxtail tacos. It was out of control,” he said, sipping on a beer. “We went through an entire case of tortillas and had to call the restaurant for back-up. They were really busy but the bus boy biked his ass down here with more. It was intense.”

Later on, the Stop volunteers, too, who clocked in 33,540 hours last year across all the organization’s programs, also had time to take in the night’s success. So too did the Stop’s Event Coordinator Danielle Goldfinger, who, according to all of her colleagues, is the mastermind behind the night market. I tracked her down, hoarse from what must have been a very long day, by the Porta Potties. “I just thought we needed a fresh new event that was for a different audience than some of our other events we’ve done,” said Goldfinger, who first had the idea for the night market back in the autumn. “I used to live in Asia so that’s part of where the idea of the night market comes from. You’ll walk under a bridge during the day and it’s just a normal bridge but then suddenly at night tables pop up and fryers come out and suddenly you have a bustling night market.” Soon, she started connecting with volunteers to help plan it and many of them were part of the design community.  “That’s where the food and the design met. They really came together quite nicely.” The participation of the restaurant community, who’ve helped The Stop raise millions of dollars, was equally as important, she explained.

On my way out, Chris Brown, the Stop’s Executive Chef who manned the centre’s pad thai booth all night, told me that his  “buddy [Food Network host] Kevin Brauch said ‘just you wait and see. This is going to change the city’s food scene.'”

He could be right.

Have a look at Jenna Wakani’s lovely photos from the night.

The parking lot behind Honest Ed’s during a summer festival.