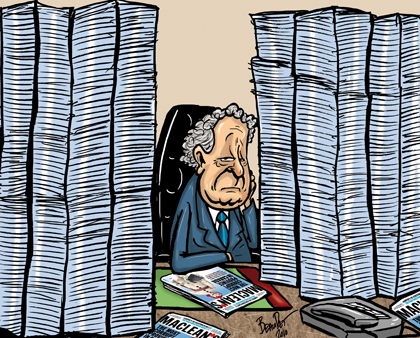 Well, that was most interesting.

What follows is an odds-and-sods roundup of the last four berzerker weeks, which began as a series of discussions with my editors and ended with a parliamentary rebuke. It’s familiar ground by now, best summarized here, so I’ll limit myself to a few thoughts of the aftermath.

On being deliberately misunderstood. Journal de Montréal’s Richard Martineau wrote the following words last week in reaction to our articles on Quebec corruption. “No matter what Maclean’s journalist Martin Patriquin (or, especially, Andrew Coyne, the editor-in-chief [sic]) says, it is not our institutions that the Toronto magazine attacks. It attacks who we are. (‘C’est ce que nous sommes…‘)”

(Andrew is a big boy, so I’ll only speak for myself.)

Now, Martineau fancies himself a shoot-from-the-hip straight talker—his column is called Straight Talking, after all—so I read this passage with consternation. After all, it seems Martineau’s straight shooter eyes and straight shooter brain failed to pick up the bit where I mentioned how “[t]he history of corruption is sufficiently long and deep in Quebec that it has bred a culture of mistrust of the political class. It raises an uncomfortable question: why is it that politics in Canada’s bête noire province seem perpetually rife with scandal?” Or how the sponsorship scandal, largely perpetrated by Quebec politicians, had “damag[ed] Quebec’s collective psyche.” He Who Shoots Straight even failed to pick up on the conclusion of the piece: “For many Quebecers, though, talk of renewal is cheap. As they know all too well, rules in the bête noire province have a habit of being broken.”

Funnily enough, the straight shooter wrote these words after he had the straight shooter idea to invite me onto his television show (titled, you guessed it, Straight Talkers), though apparently his straight shooter prerogative allows him to forgo explaining himself. (I asked, and the straight shooter silence has been deafening.) So I’ll put the question to him here: who, exactly, is the we (‘nous’) you speak of, Richard, and why do I get the feeling that I, a born-and-bred Quebecer, am not a part of it? Strange, that.

It’s all the separatists’ fault! So said Le Devoir, in a review of the editorial package last week. Stéphane Baillargeon, the paper’s media reporter, claimed the story placed the blame for Quebec’s collective ailments squarely on the shoulders of the separatist movement. It didn’t.

Certainly, the threat of separation (or the Bloc’s incredible lobbying chops, at the very least) has been a boon for Quebec at the federal level. With the Bloc in Ottawa, equalization payments to Quebec have nearly doubled over the last five years, while those for other ‘have not’ provinces have increased modestly or even regressed during the same time.

Baillargeon’s notion, which isn’t particularly original in these parts, rests on the reference to Quebec’s “nagging existential question.” Yet it isn’t just the separatists who are to blame; the federalists are just as guilty. For nearly 35 years, politics in Quebec have been a war between entrenched camps, not only on the left and the right, but on the separatist-or-federalist line as well, and our political culture has atrophied as a result. On one side we have federalists, whose perpetual goal of “saving the country” has brought an equally enduring sense of self-entitlement amongst many federalist politicians. On the other the sovereignists, who purposefully stymie Canada’s political machinery if only to show to what extent the whole mess doesn’t work. Even last week’s parliamentary rebuke of Maclean’s was steeped in this wretched cliché: according to the Globe’s Jane Taber, several Conservative MPs were wary of the Bloc motion, yet voted for it out of fear what would otherwise happen to national unity. We’re totally stuck.

Fortunately, there is a growing realization of as much in the political class itself. On the left, Québec Solidaire, whose co-leader (and sole MNA) Amir Khadir was instrumental in uncovering the alleged excesses of the provincial Liberals’ fundraising activities. (QS, it must be said, is nominally sovereignist, but not obsessively so.) On the right we have the (faltering) Action Démocratique du Québec and the (burgeoning) Réseau Liberté Québec. The former has a handful of seats, while the latter has pledged to spread the righty gospel either through the ADQ or another, as yet unnamed, party. Myself, I pine for a Quebec where the politicians call each other lefty statist pansies or conservative, small-government knuckle-draggers, as they do in the rest of the free world. A man can dream.

Parliament wags a finger. The Globe’s Doug Saunders, visiting from abroad, put it best in a (ugh) Tweet last week. On the issue of parliament officially rebuking Maclean’s, Saunders wrote, “I seem to be visiting a country where the media wrote about government corruption and the whole parliament denounced them for doing so.”

I’m also very happy to point out that Jean-François Lisée, whom I both respect and respectfully disagree with, took issue with the Bloc’s rebuke motion.“Elected representatives should never vote on the use of freedom of expression, no matter what.” (Over the last week, Lisée and I have mastered that true instrument of free speech: the snarky, back-and-forth email war.)

One more thing. Warren Kinsella referred to me as “one of the biggest scumbags in Canadian journalism,” a phrase so delicious that it deserves to be written in icing across my next birthday cake. I look forward to sharing a big piece of scumbag pie with him sometime in the future. My treat.