POTTER: "The conflict has clearly been going worse, for longer, than we've been led to believe" 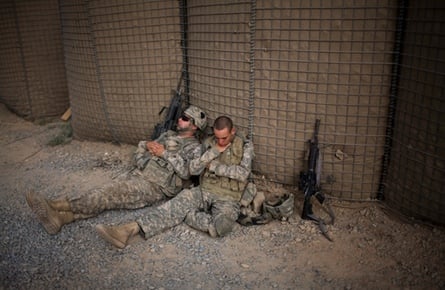 So Sunday plans went out the window when the Times, Guardian, and Der Spiegel hit the web with huge packages of stories based on what the Times is calling The War Logs — thousands of military and intelligence reports from Afghanistan going back to 2005. The documents were leaked to Wikileaks, who then gave these papers early access to scrape them for stories. The raw data is available from Wikileaks. The Guardian has some excellent map-based analysis; the Times’ CJ Chivers has a heart-stopping piece about the attack on Outpost Keating. Wikipedia already has a decent entry.

Both the Times and Guardian have posted caveats about their use of the information; at the moment I don’t have much to say on the ethics of it all. I’ve spent the past few hours working through the database looking for interesting stories or events using a handful of keywords, nothing special. I’m sure some of you have been doing the same and I look forward to your comments and insights.

The big news is that the Taliban have been using surface to air missiles (some successor to the Stingers, apparently) against helicopters and fixed-wing aircraft, which has been kept very quiet. There is also the revelation that Pakistan’s ISI is appears to be a Taliban accomplice.

A few other things that have jumped out at me so far:

1.The conflict has clearly been going worse, for longer, than we’ve been led to believe, even correcting for the suspicion that we were being misled.

2. The amount of friendly fire incidents is really high, but I kind of expected that. But more surprising is the amount of Green-on-Green (i.e. friendly Afghan vs friendly Afghan) violence. Some of it is accidental fog-of-war stuff, but I’m amazed at how much fighting and score-settling goes on between Afghan army members and Afghan police, from minor skirmishes to the guy who blew up his neighbour’s house, with the whole family inside.

3. The sheer number of civilians wounded and killed as a matter of course is depressing. From little girls getting run over by humvees to teenagers on bikes getting shot at roadblocks to entire families getting taken out by airstrikes… it makes you wonder how there can possibly be any goodwill left at all, any hearts and minds left to be won over. One story in particular left me shaking my head: coalition forces were using what they assumed to be an empty field for artillery practice. Only later did they find out they had killed a young girl who was herding some sheep. The elders carried her body down, but they apparently weren’t angry — they knew that ISAF routinely used the field for practice. A fee was negotiated as compensation for the dead girl, and for the dead sheep.

4. The flip side of this is the scale and frequency of attacks against young girls by the Taliban, especially girls schools. The intimidation is as routine as it is shocking:

(S//REL GCTF)  A LETTER WAS RECEIVED BY THE DISTRICT COMMISSIONER OF DAMAN DISTRICT STATING THAT ANY GIRLS ATTENDING SCHOOL WILL CAUSE THE SCHOOL TO BE BURNT DOWN. NOSES AND EARS WILL BE CUT OFF FROM ANY WOMEN SEEN GOING TO AND FROM THE SCHOOL IT STATED IN THE LETTER SENT BY THE COUNCIL OF SCHOLARS. (GLOBAL)

PAKTYA: BLOOD LETTERS/DEATH THREATS HAVE BEEN RECEIVED BY A GRS INTERPRETER AND HIS WIFE, A TEACHER AT A GIRLS SCHOOL IN JAJI. THE AUTHOR OF THE LETTER HAS THREATENED TO BURN DOWN THE SCHOOL AND TO KILL THEM SHOULD THEY CONTINUE TO HAVE ANYTHING TO DO WITH THE WESTERNERS OR THE ELECTORAL PROCESS.

Under Secretary Karen Hughes requests your assistance to support the dissemination of counterterrorism messages in response to a grisly video circulating in Pakistan showing a young boy affiliated with the Taliban beheading an adult Pakistani male.  Exploiting children and making them instruments of hate and death is a barbaric and abhorrent tactic of Taliban terrorists.

6. One thing this database gives is a much better sense of the tempo and pace and intensity of the conflict. Canadian officials won’t talk about much that is combat-related except deaths, so we don’t hear about what is obviously a clear routine of firefights, IED strikes, disabled vehicles, rocket and mortar attacks, and so on. The apparent constant contact with the enemy is something that surprised me. I wish the military was more upfront about this.

7. I don’t really understand this:

EOD team responded to suspect package received at KAF post office. Item was suspiciously like incident from 10 April 07. This one was mailed from Canada, return address from Los Angeles CA, addressed to Prince Charles and the Post Master General, Kandahar AF APO AE 09355. This one contained a letter and a business card. Team X-rayed item, found no explosive hazard and declared the package safe. Upon examination, it was discovered that the person who sent the letter was ready to sell information he had concerning the Italian International Mob, This information had a $10 million price tag. The letter continued on to wish the Prince a happy Easter and congratulated him on his new baby. Incident terminated without further adieu. Discussions are underway with other agencies to alert us when visiting dignitaries such as the Prince of Wales arrive.

8. Every now and then, you come across a report that starts out seeming as routine as all the rest, and then, suddenly,  the fog of acronyms and militarese clears and the shocking headlines come flooding back:

TF Bayonet reported an SVBIED strike in Kandahar. At 0855Z, KPRT reported an SVBIED detonated against the second vehicle of one of its four vehicle convoys. The blast caused damage to two vehicles (LUVW). The first vehicle sustained minor damage. However, the second vehicle sustained significant damage requiring it to be towed back to KPRT. An immediate reaction force from TF Bayonet moved to the site with TF IED and is currently exploiting the site. Also, as a result of the IED strike, one Canadian Foreign Service Representative was killed in action, and three Coalition soldiers were wounded in action. There were also two civilians killed and ten wounded. At 0918Z, TF Bayonet requested a MEDEVAC for the three Coalition soldiers. Patient one suffered an amputation, patient two is trapped in a vehicle, and patient three has severe internal bleeding. All three Coalition soldiers are listed as URGENT and patients two and three require a LITTER. MEDEVAC 01-15A (MM 01-15A) was approved by CJTF76 at 0920Z. MM 01-15A, wheels-up from KAF at 0934Z and wheels-up from PZ at 0953Z. TF IED was requested and CJTF76 approved request (ground transport) at 0939Z. MM01-15A, mission complete at 1010Z. The remains of the deceased Canadian Foreign Service Representative were transported to Kandahar Airfield by ground today. EOD destroyed two M72 AT (LAW) launchers (Coalition) damaged in the explosion.