Three cheers for the IIHF 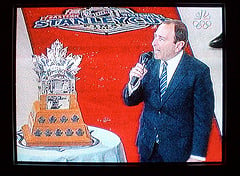 Some speculate that Gary Bettman is celebrating at NHL h.q. that the semifinals are an all-American affair. Maybe so, but Canada remains the league’s bread and butter, and there are signs our attention is wandering (you know: more than usual).

This may result in a TV ratings shellacking for the NHL in the next few days, though we’ll have to wait a few weeks for the results. The matchup: Canada v. Sweden tonight at the IIHF championship in Halifax (TSN), versus the Dallas Stars and the Other Swedish National Team (a.k.a. the Red Wings) on Saturday. As Hockey Canada honcho Bob Nicholson notes, last year’s IIHF gold medal game from Moscow pulled 1.8 million viewers—despite a poor time slot compared to tonight’s 5 p.m. ET semi.

Ratings for the NHL semifinals are not yet available. But the comparatives to this point don’t look good. In the second round, the most-watched game out of the U.S. (Dallas v. San Jose, Game 6) drew a measly 800,000 here in Canada. Even the Habs and Flyers were drawing in the 1.75 million range on CBC. The sponsors must be getting restless.

Now we have a star-studded Canadian team in contention in a tournament that is being played on home soil, and might well provide better hockey than the NHL playoffs. If I can choose only one game over the next two days, I know which one it will be.