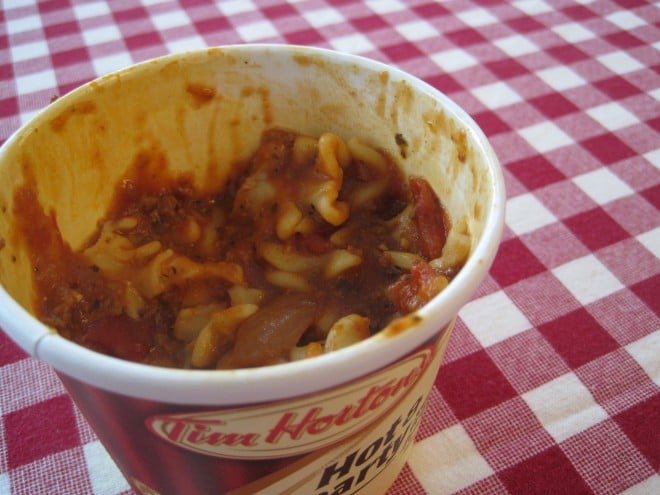 I adore lasagna; all kinds of lasagna. I love the sort my mom used to make with canned mushrooms, slices of processed mozzarella and ground beef flavoured with garlic powder and onion; I love the classic Canadian version that other mothers used to make (the one with cottage cheese smothered between layers of noodles, a tomato-dense meat sauce and grated mozzarella from a plastic bag); I love President’s Choice and No Name frozen lasagnas, even though they take, like, forever to cook in the oven; and I love the quintessential lasagna alla Bolognese that comes courtesy of the Italians in Emilia-Romagna, a north-eastern region famous for producing Ferraris, Fellini and food.

They’re so crazy about food in Bologna, the region’s capital and arguably the gastronomical capital of the country, that they even codify classic recipes, for posterity’s sake. Like lasagna alla Bolognese. How does this version differ from what many Canadians grew up eating? For starters, the ragù is a thoughtful assemblage of different cuts of pork, beef and chicken livers that’s mingled with a soffrito of onions, carrots and celery, along with a little tomato sauce. This is layered between several sheets of fresh spinach pasta, grated hard cheese, like Grana Padano or Parmigiano Reggiano, and besciamel.  Even though there’s a codified version, every Italian mother makes her ragù a little differently. Some add milk. Some add boiled eggs. And everyone’s mother makes it best.

I love thinking about how lasagna alla Bolognese, and other regional variations of the baked pasta dish, migrated across the Atlantic and became, well, my mom’s version. Or your mom’s version. Or Tim Hortons version. I decided to go downstairs to our Tim’s kiosk here at Maclean’s HQ and pick up a portion for my colleagues to try. Opinions varied. Many thought it bore a striking taste resemblance to the chain’s chili. “They just added pasta and took away some of the spices,” one writer said.

“It’s not really lasagna if it’s not layered,” a managing editor commented. And she’s right. But a copy editor noted that Tim’s doesn’t actually market it as just lasagna; they call it “Beef Lasagna Casserole.” Well, that solves that!

The Milanese on staff said, “The pasta melts in your mouth, which it’s not supposed to do.” No guff. There were plenty of quips about how mushy it was. And a few comments about its appearance. Not surprisingly, it was someone from the art department that actually refused to try it based on the dish’s looks: “If I wanted to put lasagna in a blender and then eat it,” he said, “then I would.”

Even though I’m practically Italian (having worked in a Italian restaurant serving up traditional southern Italian fare and having lived in the mother country for a year), I wasn’t as offended by the Tim Hortons beef lasagna casserole as much as some of my colleagues were. “I don’t think Chef Boyardee would put his name on it,” said one. Another said that I was playing with fire by letting everyone sample it. “There are only so many washrooms on this floor,” he warned.

Personally, I thought it tasted like the token meat sauce that you eat in church basements that’s made by grandmas, or my old friend’s mother’s goulash that was always simmering in a slow-cooker and eaten with white Wonder bread smothered in margarine. In other words, not half bad.

And by the by, if you find yourself in Firenze, go to the Trattoria at Via Ghibellina, 27/R—just down a ways from Michelangelo’s old digs—and see if the owner’s mother has prepared lasagna that day.  Then eat a piece.