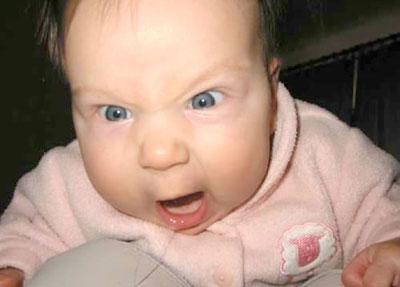 So Pauline Marois had a fit yesterday about something Jean Charest said, and journalists duly collected and printed her words. The subject of said fit isn’t really important––it was something about being responsible for the sad state of health care in Quebec, and her anger seemed as manufactured as Charest’s initial charge. The interesting thing, at least to this tête carré, was her use of the term ‘ras-le-bol’ (or, alternatively, ‘ras le bol.’)

Still, ‘Ras-le-bol”? Never heard it. It sounds like a soccer chant, or something a plumber does to an unruly toilet.

For an answer I turned to two experts: the first, my colleague the moderately-more-French Phil Gohier provided pronunciation; the righteously furious (and occasional DMA guest) Angry French Guy for a proper definition. More after this…

“Nothing in this language makes sense. It’s like a woman who cheats on you constantly but you keep coming back to her because she is so blindingly sexy.”

Angry French Guy, meanwhile, noted the term is a one of four or so terms that suggest a certain frustration with the status quo, to the point where one’s head is about to explode.

“‘Ras-le-bol’ (Filled to the rim), ‘Plein mon casque’, (My helmet is full), ‘Il y a un boutte à toute’ (There is a end to everything) and ‘Y’a des osties de limites’ (There are f**king limits) are all colorful expressions used to illustrate the absolute maximum amount of crap a Québécois or Québécoise will tolerate before he or she transforms from a friendly neighbor with a funny accent into an angry separatist.”

And now we know. Thanks French people!