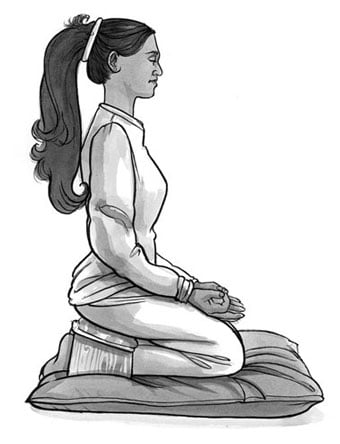 This is the second in an occasional series of posts deconstructing various phrases and words Quebec politicians hurl at one another during the current election campaign. Earlier, we examined ‘ras-le-bol’ here.

Pauline Marois was in front of a large, boisterous partisan crowd yesterday in the Montreal district of Sainte-Marie-Saint-Jacques (home to both Maclean’s Montreal office and Carte Blanche––get the onglet de boeuf if you know what’s good for you), where she took more than a few potshots at Jean Charest. Chief among them was this gem:

[Translation: Mr. Charest says he has free hands. That doesn’t sound very serious coming from Captain Canada, does it? In fact, I’m not sure Mr. Charest has free hands. But I am certain, unfortunately, that he has his two knees on the ground in front of Ottawa.”]

Marois suggests that Charest doesn’t have a free reign when governing Quebec, because he is so beholden to the federal government. The insinuation is both blatant–Charest spent many years as a federal politician before switching to provincial politics–and awfully sly: her “Captain Canada” dig is an apparent reference to Charest’s signature move of waving his Canadian passport in the air during speeches during 1995’s referendum campaign.

The coup de grâce, though, is the bit about “les deux genoux par terre.” It is the preferred way suggesting Quebec’s powerlessness within the Canadian federation, and that federalist politicians themselves are but vassals of a big, ugly, English overlord. Her use was no mistake: she said much the same of Charest the night before during the televised debate. The inference is that a federalist politician will fold at the slightest inkling from Ottawa. A sovereignist, Pauline Marois in this case, kneels for no one.

(Standing up straight is a common theme in sovereignist circles. The slogan of L’Indépendence Beer, a self-described “militant beer”, is “a beer that will never submit.”)

“There are variations of the term,” said the nice woman at l’Office québécois de la langue française. “‘Il se plit aux genoux’ [‘he puts himself on his knees’], or ‘se genouiller devant quelque chose’ [‘kneel in front of something’]. It suggests submission and capitulation. In its extreme, it means to humiliate oneself, or to wilfully abandon one’s power.”

The term, she insisted, has absolutely no sexual connotations. (DMA strongly discourages its readers from typing ‘plier les genoux’ into Google’s image search, however.) Rather, it denotes a master/servant relationship. No surprise, then, that the image figures prominently in the films of perpetually enraged separatiste Pierre Falardeau, for whom there is an English boogeyman behind every turn. Typical Falardeau quotation on the day-to-day drudgery of being Québécois: “Everyday you have to yourself on your knees to win your grub, spread your ass to keep your job and close your trap to feed your family,” he wrote in La Presse in 1995.

It begs the question: what is it that buried deep within the Québécois psyche that ‘bending at the knees’ is such a primo insult–one suitable for use in campaign speeches, no less? For answer, we turn to prolific metrosexualist Patrick Lagacé, who pens a column and writes a blog for La Presse, and fancies himself as some sort of straight shooter on the telly.

“Being on one’s knees is a sign of weakness,” Mr. Lagacé says. “It’s a great metaphor in a province that’s been, as you know, shamelessly exploited by les Maudits Anglais…”

That’s a horrible thing to say about my blog, Patrick. Anyway, how well does this sort of thing play with the population that isn’t necessarily sovereignist?

“Even those that are not sovereignists are, to some extent, nationalists…”

Enough of your chicanery! Do a majority of French Quebecers believe they are on their knees in front of the federal government?

“I wouldn’t go that far. But does it play well to, to your own crowd, to say that your political adversary is ‘à genoux devant Ottawa’? Of course.”

So there you have it. Being on one’s knees is a terrible, terrible thing. Especially during an election in Quebec. Straight up.