Mark Richardson is revved to drive the Trans-Canada from start to finish. How can we tell? Check out his time-lapse video ... 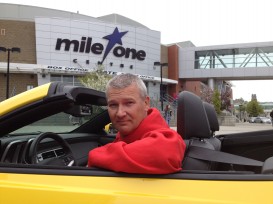 ST. JOHN’S, NF.—I’m at the eastern start of the Trans-Canada Highway, preparing for an 8,000-kilometre drive west along the highway to the other end in Victoria, B.C., which also thinks of itself as the start of the road.

In Victoria, there’s a large sign in a park beside the road down by the Pacific that declares itself “Mile Zero.” There’s no such sign here. There is a sports complex downtown called the Mile One Centre, but it’s not technically on the Highway.

No – the TCH begins in Atlantic Canada at the dump.

“The TCH technically begins on the Outer Ring Road at the Logy Bay Road overpass,” says Emily Timmins, the communications manager for Newfoundland’s Department of Transportation and Works. That’s here, about five kilometres from downtown. If you drive in from the west, as I did this week, then the road just keeps going without anything to suggest you’re no longer on the TCH until you pass the Robin Hood Bay Regional Waste Management Facility and, after a kilometre or so, come to a stop at Quidi Vidi Lake.

It was not an auspicious end to the 4,000 kilometres I’d just driven from Toronto, which you can see compressed into just a couple of minutes here, so I drove over to the Mile One Centre for a photo. Tom Petty was playing that night and parking was an issue; security tried to shoo me from putting the car right beside the sign, but a gentle chat and a little persuasion won the day. Here I am in the photo, clean and scrubbed, ready for this 10-week adventure.

There were several pioneering drives across the country before it became simple, and I’ll also be retracing their routes and telling their stories:

I’m carrying the Todd Medal with me on this road trip, as I’m also carrying a horseshoe from Wilby’s journey and a 1925 CAA radiator badge. I’ll be more comfortable than all those pioneers, of course: General Motors is providing me a 2012 Chevy Camaro convertible for this drive and the CAA is ready to rescue me should I get into any trouble. That may happen shortly, when I dip the wheels of the Camaro into the ocean here to begin the journey – I’m hoping the wharf won’t be too slippery, and this Trans-Canada Trek doesn’t end in the water before it’s even begun…

Follow me here, and on Twitter at @WheelsMark, to come along for the road trip, and we’ll explore Canada together.