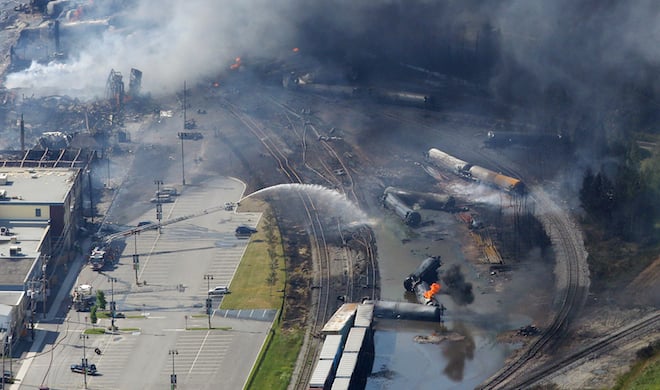 LAC-MÉGANTIC, Que. – Police say they’re treating the Lac-Mégantic disaster area as a “crime scene” and say they could lay charges in connection with a tragedy that has killed 15 people and left dozens missing.

Quebec provincial police Insp. Michel Forget revealed that police are not leaning towards terrorism as a hypothesis, but are more likely exploring the possibility of criminal negligence.

The result is that the downtown core of Lac-Mégantic falls within a security perimeter and trespassers could be charged with obstructing justice if they venture into what police are calling “the red zone.”

Rail-company officials and residents who want to access the site, perhaps to retrieve personal belongings, will have to get a police escort.

“There is potential evidence there (at the site) that could eventually lead to criminal charges being laid,” Forget told reporters.’

”When we start criminal investigations, we do recuperate different elements. I won’t speculate on the elements we have recovered because they will be secret.

He said 200 officers were on the scene investigating.

However, he did not say whether the investigation was for potential crimes committed at the explosion site or farther up the rail line.

The official death toll in the train disaster climbed as two more bodies were pulled Tuesday from the scorched area.

With about another 35 other people still missing, residents expect the grim news to continue.

The railway company is expected to step up its presence in the area Wednesday, with the arrival of a president whose absence so far has drawn public wrath.

His company’s lost oil cargo has polluted the nearby Chaudiere River, where about 100,000 litres of oil have spilled — although authorities are confident that the damage can be contained.

Some criticism has also been directed at the federal government, with some veiled warnings from the Quebec government.

Transport Minister Denis Lebel was publicly corrected by his own department Tuesday. Lebel had stated that the accidented train had just had its locomotives inspected; his department revealed in a statement Tuesday that the minister was given poor information, and it was just the cargo wagons that were inspected.

The national Transportation Safety Board is performing its own investigation.

The TSB said Tuesday that authorities were never alerted to the fact that a runaway train was on its way to levelling part of the small town.

Rail dispatchers had no chance to intervene during the fateful 18-minute journey because they didn’t know it was happening, TSB investigator Donald Ross told a news conference.

“There were no signals nor track circuits, so the rail-traffic controller had no — and would have had no — indication that there had been a runaway train,” he said.

Such systems are in place on busier rail lines including the one linking Montreal and Quebec City, but not on secondary lines, said TSB manager Ed Belkaloul.

A clearer picture of the events leading up to the fatal derailment began to emerge Tuesday as board officials gave a bare-bones account of their investigation thus far.

But they stressed it’s much too early to say who was responsible for the security of the train that rolled into Lac-Mégantic and exploded into balls of fire.

”We want to know the answer to that question as well,” Ross said.

”We need to do all of our interviews and talk to all of the people before we make sure we’ve got it right.

”It’s very important to know exactly who did what. Who was there? What did they do? Until we’ve had a chance to interview everybody we need to talk to, we can’t comment on that yet.”

The finger-pointing has already begun, with untold financial stakes at play: there are already local rumours of potential lawsuits while various parties speculate about impending compensation.

The company that owns the train, Montreal, Maine & Atlantic, and fire officials in the nearby town of Nantes have blamed each other as investigators search for causes in the tragedy that has ravaged the close-knit community about 250 kilometres east of Montreal.

The fire chief in Nantes has offered an assessment different from the railway’s about who might have been to blame in the hours leading up to the tragedy.

Edward Burkhardt, the president and CEO of MMA’s parent company, Rail World, Inc., has suggested the fire crew didn’t do enough — and even suggested the decision to shut off the locomotive to put out a fire earlier in the night might have disabled the brakes.

The fire crew, however, says it was simply following procedures set out by the railway itself.

Burkhardt is set to visit Lac-Mégantic and will likely face tough questions and a fair degree of anger from residents.

He told the CBC in an interview that the company has already changed some of its procedures — such as switching crews around Lac-Mégantic and its older rail infrastructure.

He also suggested that the decision to staff trains with one-man crews, and leaving them unattended during breaks, might have to change.

“I think there is going to be a number of changes in the rail industry overall as a result of what occurred here and I hope that we’ll be at the forefront.”

When asked whether the one-person policy had been a good idea, Burkhardt replied: “Is this correct? I’d put a real question mark on that one right now… I can tell you on MMA, we’re not leaving any of these trains unattended from now on.”

A key unanswered question now is: Who was the last person at the scene, tending to the stationary train?

Ross said the train was travelling well in excess of its authorized speed when it careened off the tracks, although no exact speed was given.

Ross said the train started to roll after the firefighters and the rail employee had left.

Questions were also raised at the news conference about the rail tankers involved in the crash.

The tankers are known as DOT-111 and have a history of puncturing during accidents, Ross has said.

Flaws in the DOT-111 have been noted as far back as a 1991 safety study. Among other things, its steel shell is too thin to resist puncturing in accidents, which almost guarantees the car will tear open, potentially spilling cargo that could catch fire, explode or contaminate the environment.

”We’ve had a long record of advocating for further improvements to many of these 111s because they’re a very common type of tanker car,” Ross said Tuesday.

”When you take very large volumes of petroleum products, like in this case, everyone sees the damage that was caused here.”

Ross said it’s too early to say the explosions could have been prevented had the tanker cars been stronger.

On Tuesday, Pope Francis sent a blessing from the Vatican to those touched by the tragedy. In a statement announcing that “special apostolic blessing,” the Pope expressed his sympathy to victims, their families and emergency workers.

The Queen has also offered a message of condolence.

It remains to be seen how the disaster might affect the ongoing political debates in Canada, and the United States, about energy transportation and pipelines.

The head of TransCanada, which hopes to build the Keystone XL pipeline to the U.S. Gulf Coast, said he’s been optimistic about the project’s chances but stressed Tuesday he saw “no good news” for anybody in the tragic Quebec event.

As for another project to build a West-East pipeline, Quebec’s premier was asked whether the plan should be sped up in light of what’s happened with rail transport.

Premier Pauline Marois replied that it’s “fair to ask that question.” But she cautioned she didn’t want to “get the two files, (the disaster and the pipeline-approval process), mixed up.”

There are plans to reverse the flow of an existing pipeline to bring Alberta oil to customers in the eastern half of Canada. The project is being reviewed by the National Energy Board.

The premier also offered a first hint that her pro-independence government might be gearing up to blame Ottawa for the Lac-Mégantic disaster.

Marois said she’s concerned about federal safety standards and wants answers. She pointed out that, under Canada’s federal system, there’s little the province can do to protect against rail disasters.

“All we can do now is demand answers from Ottawa,” Marois said during a brief news conference outside her office in Quebec City.

“I believe they’ve understood and that’s what they’re working on.”

She was asked whether she might call a public inquiry into the disaster: “We’re not there yet,” she said. “It’s a federal responsibility. The federal government will assume its responsibilities. But we can revisit all the issues related to this event in the coming days.”

Meanwhile, Lac-Mégantic’s mayor said Tuesday that about 1,200 residents were being allowed home.

The town of about 6,000 has lost most of its downtown — with a library, a popular bar, a waterfront park, and dozens of homes and businesses incinerated.

Mayor Colette Roy-Laroche pleaded for tourists to come this summer to the region, whose wild natural beauty and charming 19th-century towns are a popular draw.

She urged people not to cancel their travel plans.

“If you want to do something for us, don’t abandon us,” Roy-Laroche told a news conference.

“Even if there’s a catastophe downtown, everything else works.”

Meanwhile, new video is emerging from the night of the explosions. The below video was shot by a witness and posted to Youtube the day after the blast. (Caution: contains strong language.)