Trees and more trees, plus a few words of wisdom

NOW: (Dryden) There are two Trans-Canada Highways in this region: the traditional, more direct route 17 that passes through Dryden, and the southern route 11 that stays close to the U.S. border and passes through Fort Frances. I drove Hwy. 11 last year in an RV with the family and it was the most boring 400 km of highway I can recall – and I’ve driven some remote roads. It’s promoted as the “MOM” route, for Manitoba, Ontario, Minnesota, but there are no towns or lakes to break the monotony of flat trees. Too bad, because the road down to it from Kenora through Sioux Narrows, past Lake of the Woods, almost makes up for it. Almost.

This year, I stayed with tradition and we took Hwy. 17 with all the trucks. I think it’s the second most boring 350 km I can recall. It didn’t help that it was pouring rain most of the day, making the few small communities along the way look especially drab.

At least on this route, there was a large sign to remind us that we’re changing time zones. There was no such sign on the other road last year. Nothing. Nada. Nowt. Just trees.

THEN: In 1912, Wilby and Haney put their car onto a train to travel from Thunder Bay to Winnipeg. In 1925, Perry Doolittle put his car back onto the railway tracks to drive the same journey, for there still was no road. But in 1946, on their way to claim the Todd Medal as the first motorists to drive completely across Canada by road, Alex Macfarlane and his friend Ken MacGillivray (the former city editor of the Toronto Globe and Mail) were barreling along the highway in their borrowed Chevy Stylemaster. 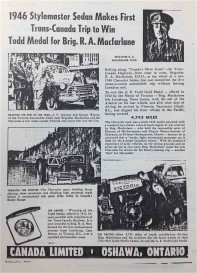 The successful drive in 1946

They came in from Geraldton to the north – the last stretch of road to be completed to link the two Canadian coasts. “I would count it a good road easily travelled and free from dangers, except the possibility of dying of lonesomeness,” Macfarlane wrote later.

Just last week, the Canadian Automobile Association, who are my sponsors for this road trip, found Macfarlane’s log book of his “Trans-Canada Motor Trip” buried in their archives and shipped it out to me in Thunder Bay. I’ve been reading his account of the 10-day journey, lost until now.

“From Port Arthur [now Thunder Bay] to Winnipeg, the road is more interesting, but not quite as good,” he reported. “That is understandable because it is much older, and in places heavily travelled. The somewhat mountainous nature of the country too necessitates a multitude of curves, and curves don’t add to the pleasure or safety of driving.”

The “much older” road was built during the Depression mostly as a make-work project. And those mountains and curves no longer exist – they’ve been flattened and smoothed over the years. I’m sure Macfarlane wouldn’t recognize it now.

SOMETHING DIFFERENT … (Thunder Bay) I got chatting with Brett Clibbery at the Starbucks in the Chapters, and he kind of set me straight on a few things. 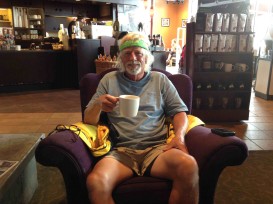 Tristan had just found a book he wanted to buy that listed all the possible cheats for online games, and Brett offered a sympathetic look when my son went off to pay for it. “Well, at least he’s reading,” I suggested. He agreed, looked at my iPhone and waved his own iPhone. “We’re not much better when you think about it,” he said.

It turns out that Brett is 60, originally from Kenora, but now lives on a sailboat and travels the world. Right now, he’s working for a Thunder Bay company operating charter sail trips in the area, but he’s looking forward to sailing south this winter. “I stay in touch with people with this,” he said, waving the iPhone again. “But it doesn’t replace writing a letter. When was the last time you wrote somebody a letter, with a pencil and paper?”

A long time ago. These days, my hand cramps up after a hundred words or so with a pen because I’m used to keyboards. But e-mails are no replacement for written words put on paper; Brett told me of an e-mail he’d sent not long ago to an old friend he hadn’t seen in years, not since they met as actors playing in Hair in London. “She’s fairly famous now and she gets a lot of e-mail, and she missed it when I sent it,” he said. “So I sat down and wrote her a letter, just a page, telling her what I’ve been doing, and I sent it to her parents’ address. It took a while for her to get it, but then she wrote right back. She was thrilled.”

The friend was Sarah Brightman, well-known for her singing performances in the musicals of Andrew Lloyd Webber, her former husband.

I think I’ll stop blogging for tonight. I have a letter to write.

SOMETHING FROM TRISTAN, 12: (Dryden) Today was by far the worst day so far because all morning it was pouring with rain so we couldn’t put the top down and I got a bit car sick. 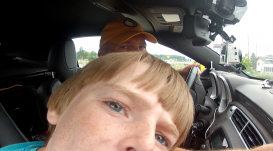 Father and son, bonding in the Camaro

When we finally got to the hotel, the pool was packed full of people so we couldn’t go swimming until right before dinner so we were only in there for like 20 minutes. It’s too bad because it was a great pool.

Tomorrow we arrive in Kenora, our last stop in Ontario. It’s taking forever to leave Ontario.