A 20-metre-long dock, swept away by the Japan tsunami of March 2011, washed up on a beach in Newport, Oregon, this week—carrying with it an intact Japanese marine ecosystem and a host of troubling questions.

Questions one and two: how to dispose of the dock—one of at least four of significant size that ripped away from coastal Japan in the aftermath of the 9.0 earthquake near Honshu—and what to do with the sea life that hitched a 14-month ride across the Pacific Ocean? Clinging to the dock are oysters, mussels, sponges, worms and other invasive species that present a risk to the U.S. coastal environment.

The dock is the largest piece of tsunami debris to hit either the U.S. or Canadian Pacific coast so far, but it’s certainly not going to be the last. Last month, Maclean’s wrote of a  49-metre fishing boat that almost completed its trans-Pacific voyage only to be blasted out of the water by the U.S. Coast Guard as a hazard to navigation. The Canadian coast has been peppered with plastic bottles, lumber and, of course, the famous Harley Davidson motorcycle that spilled out of a shipping container onto an isolated beach on Graham Island.

The latest estimate by the government of Japan is that 1.54-million tones of debris remains afloat. That a piece this size could float undetected for so long raises serious concerns about marine safety. That the debris is arriving so soon shows how little we really know about the effect of winds and ocean currents. On its website, the Canadian Department of Fisheries and Oceans still stubbornly declares the first wave of debris “is expected to begin arriving in waters off North America in 2013.”

Someone should alert the DFO to the fact that the debris already has its own Facebook page, courtesy of the Maritime Museum of B.C.

The B.C. government has also created a site for coastal communities and beachcombers to report incoming debris.

The Japanese government has requested that any personal items discovered by treated with respect. So far that has been the case. Even the dock has become something of a makeshift memorial, with Oregonians dropping off flowers to commemorate the tragic loss of lives. 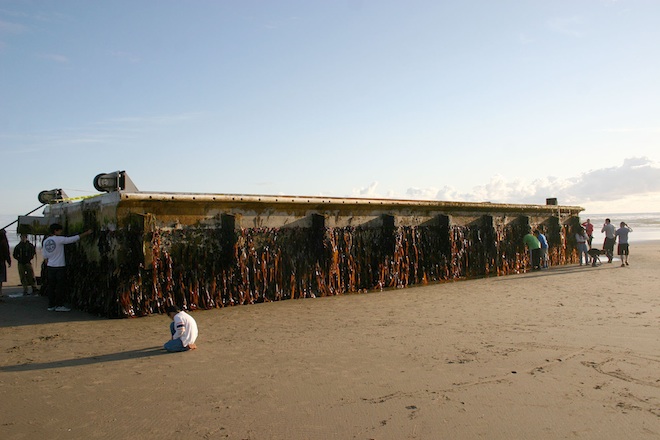