House of Commons, Prime Minister's office will be captured via panoramic camera 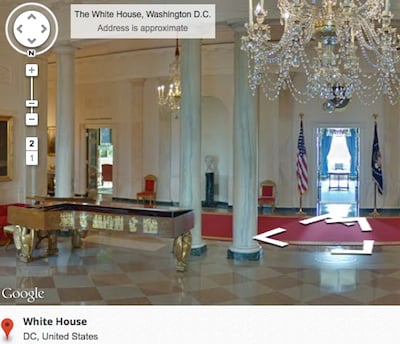 A screen capture of Google Street View's tour of the White House.

OTTAWA – Would-be MPs will soon be able to get an first-hand idea of what it’s like to sit in the House of Commons.

Google Street View is in the process of capturing images that will let people click their way through the historic halls and offices of the Parliament Buildings.

On Tuesday, Google Canada began wheeling its special panoramic camera through the House of Commons, the Senate, the parliamentary library, the hall of honour and even Prime Minister Stephen Harper’s office.

“What we’re using is something called a Trolley,” said Aaron Brindle of Google. “It’s just shy of two metres high and is has a high-res camera on it.

“It allows our operators to basically take a few steps through these halls, stop, the camera does a 360-degree panorama and it captures images from the floor to the ceiling.”

Brindle said the images will be stitched together to allow for virtual tours.

“You’ll be able to go virtually into the chamber and see from a 360-degree panoramic what it’s like to sit in the House of Commons.”

The Trolley will also capture some of the intricate carvings and artwork that adorns many of the calls and offices.

“It’s kind of like an exclusive, behind-the-scenes public tour.”

The Speakers of both the Commons and the Senate gave special permission for the cart to record the architecture and art of the buildings. Harper and Opposition Leader Tom Mulcair opened up their offices.

“It’s exciting to provide another way for Canadians to be able to view and experience their Parliament buildings,” said Commons Speaker Andrew Scheer.

“This is truly an opportunity for Canadians to bring the House of Commons into their homes.”

Google Street View has already captured the interiors of a number of historically and culturally significant buildings such as the Royal Ontario Museum in Toronto, the White House in Washington and the Metropolitan Museum of Art in New York.