Maybe citizens in Cyprus would have been better off stuffing their cash under a mattress, as the country prepares to tax its citizens’ bank accounts as part of a bailout deal reached with the European Central Bank.

Under the 10-billion euro deal, which was reached Saturday, Cyprus needs to come up with 5.8 billion euros and the European Central Bank will bring the rest. According to Reuters, such a deal will mean citizens with less than 100,000 euros in the bank will see 6.7 per cent of their savings disappear. Anyone over the 100,000-euro mark will have 9.9. per cent of their money disappear.

The measure was to come into effect on Tuesday. But Monday, Parliament delayed an emergency vote on the measure until at least Tuesday at 4 p.m. GMT, reports The Telegraph. The reason: President Nicos Anastasiades was having trouble finding the support needed to pass the bill, reports The New York Times.

Of course, Cyprus citizens weren’t too happy with the prospect of seeing up to 10 per cent of their money just vanish, and many lined up at bank machines over the weekend in an effort to withdraw their cash. Banks put a 400-euro limit in place and some machines ran out of cash, reports CNN.

Eventually, banks were closed altogether, and they may remain closed until as late as Friday. President Nicos Anastasiades appeared on television Sunday in an attempt to ease panic, saying that such a measure was necessary to keep the country from bankruptcy.

On Monday, citizens continued to express their displeasure. They gathered outside the parliament building to protest, holding signs that read: “Hands off Cyprus” and “Merkel U stole our life savings.”

Though Cyprus is a tiny nation, banking is an important industry and the current crisis is the result of spillover from the Greek banking crisis. The country’s banks also house many Russian funds, which The New York Times describes as “deposits of dubious provenance.” 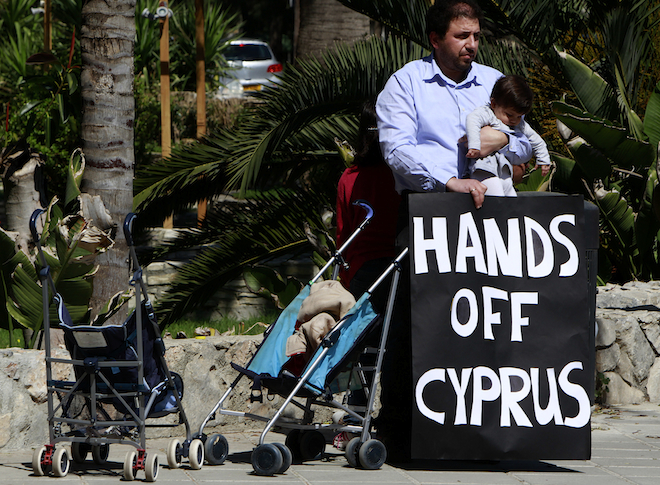 A protestor with his child holds a banner outside of parliament during a crucial meeting in capital Nicosia, Cyprus, Monday, March 18, 2013. (Petros Karadjias/AP)