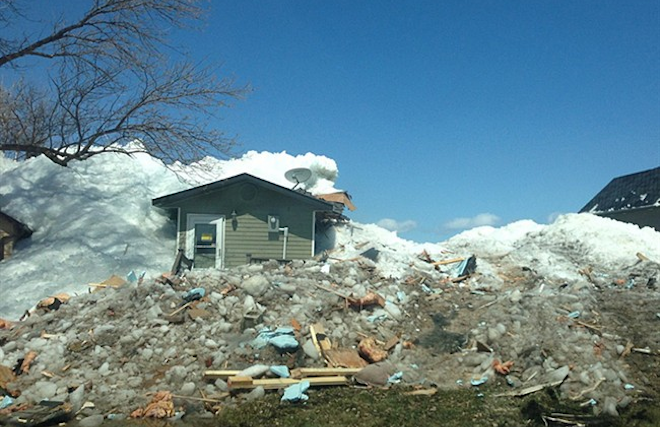 Damaged homes in Ochre Beach, Man. are seen on Saturday, May 11, 2013. Strong winds on Friday evening pushed the ice on Dauphin Lake ashore onto Ochre Beach, a summer community about 200 kilometres northwest of Winnipeg. (The Canadian Press)

CHRE BEACH, Man. – One minute, cottage owners on the southern shore of Manitoba’s Dauphin Lake were cooking on their barbecues, admiring the views across the still-frozen ice.

The next minute, that ice was rumbling up the shore like a giant nine-metre-high bulldozer, tearing apart their decks, then slicing through some homes and tipping others on their sides.

“The whole thing happened in about ten minutes,” said Clayton Watts, the deputy reeve of the Rural Municipality of Ochre River.

“We had people barbecueing on their decks. They turned around to go inside to get something, they came back out and their decks were ripping apart,” he added.

“It was like a freight train coming through, they say.”

Watts said strong winds with gusts up to 90 kilometres per hour forced the ice onto the shore at Ochre Beach, one of a couple of beaches that make up the summer community that’s about 200 kilometres northwest of Winnipeg.

More than two dozen structures were damaged and about a dozen of those were completely destroyed, he said.

There were no reports of injuries.

Watts said people were trying to salvage what they could on Saturday.

“They’re in, whether it be with shovels and rakes and wheelbarrows, they’re trying to get ice out of the houses and we’ve got heavy equipment in trying to remove all of the ice from the front of the cabin so it doesn’t cave back in on them,” Watts said.

“The cabins and houses that are still standing, a lot of them have living rooms and kitchens and bedrooms full of ice that was smashed through in the front.”

A news release from the municipality said RCMP, as well as local EMS and firefighters swept the area and went door-to-door. Everyone has been accounted for, the release said.

The municipality has declared a local state of emergency.

Watts said many property owners suffered severe flood damage two years ago and had recently rebuilt, in some cases raising their homes and land.

He said no one was even thinking about the ice yet, because it was still almost a metre thick with no open water.

“We thought we were over the hump on everything. We had no flooding. We had nothing. And suddenly this has just come up. It was totally unexpected.”

“We just pray that the ice doesn’t move out and come back in again with the wind.”

The Manitoba government said one family was assisted by provincial emergency social services, while other displaced people have gone to stay with family and friends.

The municipality says damage to one structure knocked out power to the community, but electricity was restored by midnight.

The last time there was ice damage like this in the community was in the 1960s, Watts said, although it wasn’t as severe and the damage was limited because the cabins were much smaller and more rustic at the time.

“There’s no stopping ice once it gets moving. It’ll take out everything in its path.”