Wanting to be at the end of the Trans-Canada

NOW: (Duncan) The town of Tofino would have liked me to drive on west from Port Alberni to reach the end of the Trans-Canada. It claims to be the Pacific terminus of the highway, but this is just a claim – it’s not, despite the sign down by the wharf that declares it as such. 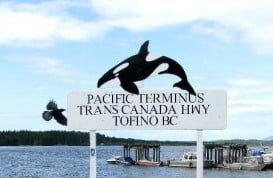 It’s an extra 125 km west to Tofino, but it’s slow going: Hwy. 4 is a narrow two-lane highway that twists and turns in places between rocky outcrops, and it doesn’t allow for higher speed. Even so, the town lobbied back in the 1930s and ’40s to be the end of the Trans-Canada, and there are those who say that the municipality was double-crossed by politicians in Victoria. The sign went up back then and it’s not about to be taken down.

Local resident Ken Gibson has been talking to the media about this. You can read the Canadian Press story here, or listen to his explanation to the CBC here.

But as even he accepts, there’s nothing official about the town’s declaration. Just because it’s the farthest west point on southern Vancouver Island and opens onto the Pacific Ocean is not enough to qualify it as the TCH’s endpoint. In fact, the Trans-Canada already reaches farther west than Tofino: The Yellowhead Highway, Route 16, which splits away from Route 1 in Manitoba west of Winnipeg and passes through Edmonton, is officially considered part of the Trans-Canada Highway. It ends at Prince Rupert, north of Vancouver Island and much farther west.

THEN: (Port Alberni) I poked around the town’s museum this morning and discovered there may have been more to the story of the 1912 gathering than I knew about yesterday. 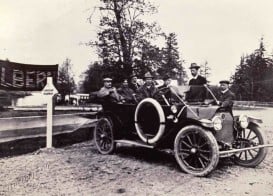 The neighbouring towns of Alberni and Port Alberni were fierce rivals. When the Canadian Pacific Railroad company decided in 1907 to build its station in the newer community of Port Alberni, the Alberni residents figured that, to make up for losing the railway, they would pitch for the new highway.

So which came first: the town of Alberni approaching the motoring organizations, or the motorists suggesting the highway to the town? Modern historical accounts favour the latter, but it seems more likely it was the former.

Either way, it’s no big deal, except that it may be that the first germ of the idea for a Trans-Canada Highway came about from the petty jealousy of two small chambers of commerce, far away from any corridors of power.

I’ll be writing a book later this year about the Trans-Canada Highway that will include far more research, detail and stories than this daily blog has permitted. I’ll see if I can track down the facts in Victoria this week, so that the record can finally be set straight.

SOMETHING DIFFERENT: (Coombs) Tourists know the “Goats on the Roof” country market as just that – a very popular place to stop that just happens to have goats grazing on its roof. It’s a restaurant and a well-stocked store full of gourmet foods and bizarre souvenirs, and several other stores for surf equipment and jewellery and all things popular with West-Coast visitors. 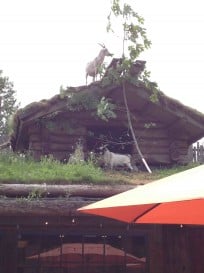 Goats, on the roof

But how did the goats get there in the first place?

“It’s a building that’s built in the Norwegian style with grass on the roof – our heritage here lends itself to that – and it’s not uncommon there, in Norway, for goats to graze on the roof,” says manager Arthur Urie.

“In 1971 or ’72, the fall fair literally ran out of space for its goats, and so the owner of the store offered to put some of the goats up on the roof during the fair and it just stuck. All of a sudden, people starting driving by to see them, and then they stopped at the store, and so there have been goats up there ever since.”

There are currently three goats that live on the roof, taken up there at the end of April and brought down again to more level pasture in mid-September. Daniel and Hendrik are the four-year-old twins, while Willy is the larger goat, older by a year. They’re social and popular – as many as 5,000 people visit the store and peer up at them on a busy summer day.

And at the end of the summer, what happens to the goats?

“They’ll go out to pasture,” says Arthur. “Don’t even suggest anything else! These goats are my wife’s pets – don’t even breathe anything different or she’ll be down here with a big stick to protect them!” 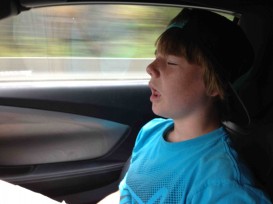 I’m starting to get a bit bored of just being with my dad for four weeks and apparently another two. I want to go home.