What a brutal way for Annika to finish her career 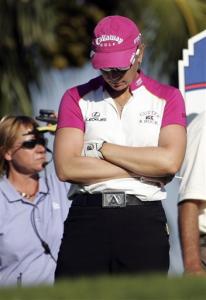 You gotta feel bad for Annika Sorenstam. The 10-time major winner, and arguably the best female golfer ever, failed to make the cut in her last professional tournament after posting a three-over in the second round of the ADT Championship in West Palm Beach, Fla., which left her two shots off the cut. Yet something tells me that Annika–who won a staggering 72 LPGA tournaments during her career and is the only female golfer in history to shoot a 59 in a single round–will be back for more. I mean let’s be honest, for her to miss the cut in the last tournament that she enters is sort of like Lance Armstrong falling off his bike on the final stretch off his last Tour de France race, or Roger Federer losing 6-0, 6-0, 6-0 in the first round of his last appearance at Wimbledon. She’s too good, and too damn competitive to go out like this. I hope that you come back Annika for one more go around and leave as the champion that you are, or at least a former champion who can still make the cut.