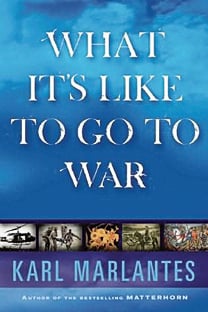 Given the human record, it’s not likely the need for soldiers will disappear any time soon. Marlantes wants both to set down his own wartime experiences and to help those entering “the sacrificial fire called war” understand what is being asked of them. The physical risks are obvious for soldiers and families alike, but the real issue for the author is the killing the young men inflict. Warriors suffer from their violations of their cultures’ moral norms, and again from the fact modern society usually ignores that side of war.

The bulk of the book consists of Marlantes’s scarifying accounts of his time as a Marine lieutenant in Vietnam. (One story he tells, about an enlisted man from B.C., prompts an intriguing footnote: “I’ve often wondered how Canadian veterans have handled their return to a nation that already projects so much of its own darker sides onto the U.S.”) His Vietnam memories—the basis of Marlantes’s justly praised 2010 novel, Matterhorn—gave him the profound belief that combat is a potentially sacred experience, incorporating the four common components of mystical experiences: preternatural awareness of one’s own mortality, complete focus on the present instant, valuing others’ lives over one’s own, feeling part of a larger community. If soldiers can bring meaning to such moments, Marlantes believes, then their sanity will be better preserved, they will be less inclined to do more harm than they need to (that is, commit atrocities) and they will reintegrate more easily into society.

But how to assimilate these experiences? In the past, warriors were prepared for their psyche-altering role by ritual and literature (Marlantes has read the Iliad more than once). Today they need those aids as much as ever. Victors in battle should play a role in the respectful burial of enemy bodies, thanking the dead on both sides “for their fully played-out part in this mysterious drama” and asking for forgiveness if “we killed in anger or hatred.” From someone who hasn’t been where Marlantes has, physically and spiritually, this could sound absurd. From him it sounds like wisdom.

FILED UNDER: Karl Marlantes What it's like to go to war