While the Democrats lick their wounds, the GOP looks to rein in the Tea Party 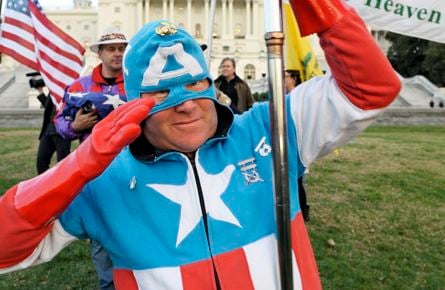 What will a New Year in Washington, D.C. bring? In a phrase: more politics than ever.

It is true this year will end on a bipartisan note. But with the arrival in Washington of a contingent of Tea Partiers, watch for a lot of Congressional posturing. Despite their long-standing affinity for each other, Tea Partiers will test the leadership skills and patience of House Speaker John Boehner as the Republicans try to find a viable political platform. Will the GOP stick to an agenda of smaller government which they promised under Reagan and Bush, but failed to deliver? Will they tackle the hard issues of entitlement and defense spending? Can the GOP retain its pro-free trade stance in the face of the Tea Party’s isolationist tendencies?

The Democrats, meanwhile, are still licking their wounds from the mid-terms, and the party’s liberal-progressive wing is still smarting from the deal on the Bush tax cuts. Are they prepared to tackle reforms to the types of social programs that are dear to their liberal-progressive roots? And even though Barack Obama ended on a relatively high note, with polls showing some rebound at the end of the year, can he carry the remainder of his agenda forward with a divided Congress and Republicans eyeing the White House?

Going into the New Year, there is a long list of outstanding issues that could trip up either party: energy independance, immigration reform, deficit reduction, debt repayment, the war in Afghanistan, education reform, healthcare reform, and a slow economic recovery with its attendant high unemployment. It is on these issues that we will see if the politicians have correctly interpreted the message American voters sent on November 2. Because while Republicans interpreted the results as a rejection of the Obama-Pelosi agenda and Democrats saw them as a consequence of a bad economy, it is possible both parties misread the situation. According to polls in recent years, what the electorate wants is not a more dogmatic approach to policy-making, but more bipartisan efforts at crafting solutions. The lame duck session—and the compromises that emerged from it—have so far seemed to find favour with the American people.

Polls in recent days are sending mixed messages. Obama, for instance, remains widely admired, yet his disapproval numbers have risen to the mid to high 40s. While half the country believes the Republicans taking control of the House is good for the nation, three quarters of Americans expect the GOP to perform either worse or about the same as the Democrats.

How the political leadership will navigate through this is anyone’s guess. My sense is that Obama will reduce his dependance on Congress to push his agenda forward and shift his attention to foreign policy and international trade efforts. Domestically, he will use the bully pulpit and focus on incremental changes. Obama’s interactions with Congress will consist of getting financial support for existing reforms as opposed to pressing legislators to pass new ones. As a result, he will likely have to compromise on issues like the deficit, debt, energy policy, the environment, and immigration, meaning he will have little transformational change to show for his efforts except the impression he has understood the results of the mid-terms and acted accordingly.

The GOP will be the more fascinating party to watch in 2011. It is possible Sarah Palin will make a bombshell announcement in the first half of the year that she will not seek the presidency. There is a growing suspicion the Republican establishment is reluctant to have her as a candidate despite her obvious notoriety. Her low poll numbers among independant voters have done nothing to enhance her chances with key Republican operatives. Without Palin in the race, it is difficult to predict who would be the frontrunner Republican nominee. Mitt Romney, Mike Huckabee, or some as-yet-unknown candidate will emerge, but in a very uncertain political climate. The only certainty is that Palin’s celebrity status will keep her around as a force when the GOP gets around to picking its nominee.

By this time next year, we should have a better idea of the battleground for the 2012 presidential election. With the bipartisan tax deal, Obama has given the Republicans a share of the responsibility for the economy, since the deal was pitched as a sort of alternate stimulus effort—and a Republican-inspired one at that. If the slow pace of the recovery persists, the blame will like be shared entering the next electoral cycle, making 2012 even harder to predict.