What were you doing on Sunday? 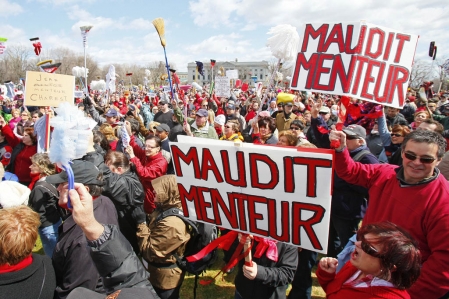 You were probably watching golf. Me, I was grouting the bathroom, with the help of these guys.

Meanwhile, in Quebec City, 50,000 people took to the streets armed with brooms, baloney sandwiches and pancartes in a bout of furious street theatre. They call themselves the ‘red collars’, because they are righteously peeved. At what, you ask? Jean Charest’s recent budget, a cornucopia of new taxes, user fees and spending slashes. On a Sunday. It’s somehow heartening to know that this sort of thing doesn’t really happen anywhere else in the country.