Whatever happened to Intergovernmental Affairs?

Is it possible the Bloc has become Canada's de-facto Ministry of Intergovernmental Affairs? 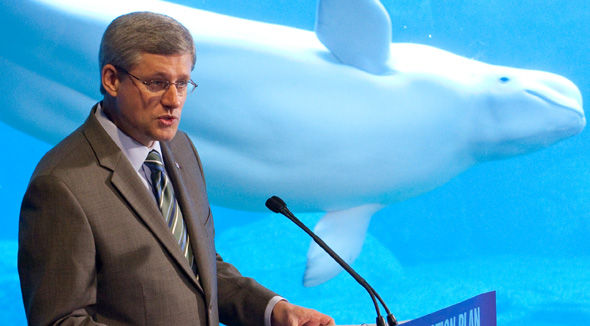 For reasons I imagine have a lot to do with the 20th anniversary of Gilles Duceppe’s election, a lot of ideas are being floated about on how to get rid of the Bloc. For the most part, these appear to be based on the premise that the problem with the Bloc isn’t that its long-term goal of an independent Quebec is fundamentally incompatible with the survival of the Canadian federation; rather, it’s that the Bloc prevents the Conservatives or the Liberals from getting a Parliamentary majority. (For the record, since Duceppe got to Ottawa, he’s spent 14 years opposing a majority and six opposing a minority.)

Jeffrey Simpson has suggested the party be bankrupted into obsolescence; pollster John Wright, abiding by the time-honoured principle that if you ignore your problems they just go away, figures the federalist parties may be better off waiting for demographics to run their course; William Johnson recommends having Mel Hurtig take over the Quebec Liberal party and working in the phrase “le plusse meilleur pays au monde” into speeches more often; the Toronto Star‘s editorial board advises that either the Liberals should transform into credible Quebec nationalists or the Tories should go Bolshevik (what happens if they both take the advice?); the National Post, meanwhile, is stuck on the rather existential question of whether Quebec “matters.”

The stunning decline of the intergovernmental affairs portfolio at the federal level is rarely, if ever, mentioned in the discussion. Is it possible the Bloc has become Canada’s de-facto Ministry of Intergovernmental Affairs? Because they’re the only ones who seem burdened by the task.

Since 2006, four different ministers have handled the portfolio and Josée Verner has now held the job for nearly two years. During that time, Verner has made a grand total of one speech (I don’t count MPs talking about government work in the House of Commons as a speech). Of the three announcements made by the government’s Intergovernmental Affairs division over the past year and a half, two were for appointments to the Transportation Safety Board (apparently the true lynchpin of Canadian federalism) and the other about a grant to fix the water system in the town of Shannon. The picture above is the first one you’ll see if you go to the former ministry’s website. In case you were wondering, that’s Stephen Harper announcing upgrades to the Vancouver aquarium.

It’s not clear to me what the federal government and its institutions can do to regain their legitimacy in Quebec. Still, it’s striking how little interest they’ve got in even trying.