What's so cool about living at the office?

Emma Teitel on the biggest myth about working at home 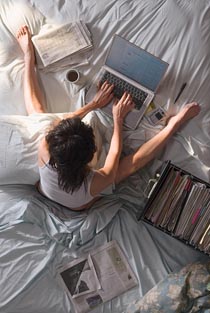 My dad is a writer who works from home. Growing up, I thought this was very strange, especially when I stayed home from school and observed him in his natural habitat, doing the crossword in pyjamas (gym shorts, NFL T-shirt), interviewing people in pyjamas, asking—and answering—rhetorical questions, in pyjamas. Take-your-kid-to-work day was essentially a sick day for me. I’d watch Maury in my pyjamas while my dad went to work in his. Not much has changed since. In fact, I am in my pyjamas right now (sweatpants, NHL T-shirt) because I am also a writer who occasionally works from home. I no longer watch Maury (cancelled) but I do phone interviews from bed and I take my lunch break standing at the fridge—over a block of Gorgonzola that I eat throughout the day.

Some say it’s unhealthy—not just the cheese, but the general business of never actually going to a place of business: the routine isolation of the telecommuter lifestyle. One study from Mitt Romney’s alma mater, Brigham Young University, concluded that lack of social interaction—an inevitable by-product of working from home, let’s face it—can be just as bad for you as smoking. (Smoking while working from home? You might as well kill yourself.) Studies abound decrying the loneliness-inducing and laziness-promoting effects of telecommuting. Apparently, people are social creatures who need to interact with other creatures, even if it means getting dressed and leaving the house once in a while.

But technology has made it a lot easier to ignore that need. We are at the dawn of a telecommuting age. Statistics Canada notes that one in five university graduates work at home (as do a similar proportion of workers around the globe, according to Reuters) and as of 2008, 11.2 per cent of workers telecommuted—a number that’s been steadily rising. In other words, one day, my dad’s way of life won’t be weird but commonplace.

Which sounds like a good thing. An op-ed in the Toronto Star this month argued that politicians should make way for the future, and encourage telecommuting to save taxpayer money on expensive public-transit proposals. (“It’s as if our subway-building, highway-paving, transit-tax-levying politicians are stuck in the 1950s with their transit strategies, instead of looking at 2020 realities,” wrote Paul Barter, an adjunct professor at York University’s Schulich School of Business, and Robert Brehl, a former Star reporter.)

Until you look at the facts. Nobody likes halitosis—which will pose a serious problem for telecommuters. Why brush your teeth when the only person you’ll be talking to all day is yourself? And that radio interview you have in five minutes? Why do it at your desk when you can do it on the toilet?

But in the end, the worst part about working from home isn’t that we’ll most likely devolve into a sub-species of Gorgonzola-scarfing, PJ-wearing daywalkers incapable of making eye contact. It’s that we’ll have erased for good what little remained of that precious line between personal and professional, home and away. The most persistent myth about working from home is that it’s the perfect nod to work-life balance, a benevolent gift from a progressive employer, but there’s nothing remotely progressive about living in your office—which you technically do if you work from home. You think about work constantly, and check your email more obsessively than you would if you were actually in your cubicle. Your day can be broken up into three categories: limitless time, Gorgonzola, and the nagging suspicion that you should be doing something you’re not.

Jesse Brown writes in this month’s Toronto Life that “work and life are not mutually exclusive,” and we should all get used to this reality, even if it means checking our phones at the dinner table, or in my case, at the fridge. But work and life, as close as they appear, are not one and the same—at least not yet.

Denounce the morning commute and the watercooler all you like, but remember that they are the last bastion of a world in which personal and professional were opposites, not synonyms. And if you recently started working from home and think you won the employment lottery, keep this in mind: shortly after his 55th birthday, my dad got out of bed one morning and decided he just couldn’t take it anymore. He had to turn his life around. So he put on a tie.

FILED UNDER: WORKING AT HOME