Editorial: When the NRA is a voice of moderation on ‘open carry’ laws, it’s clear America’s obsession with guns has gone too far 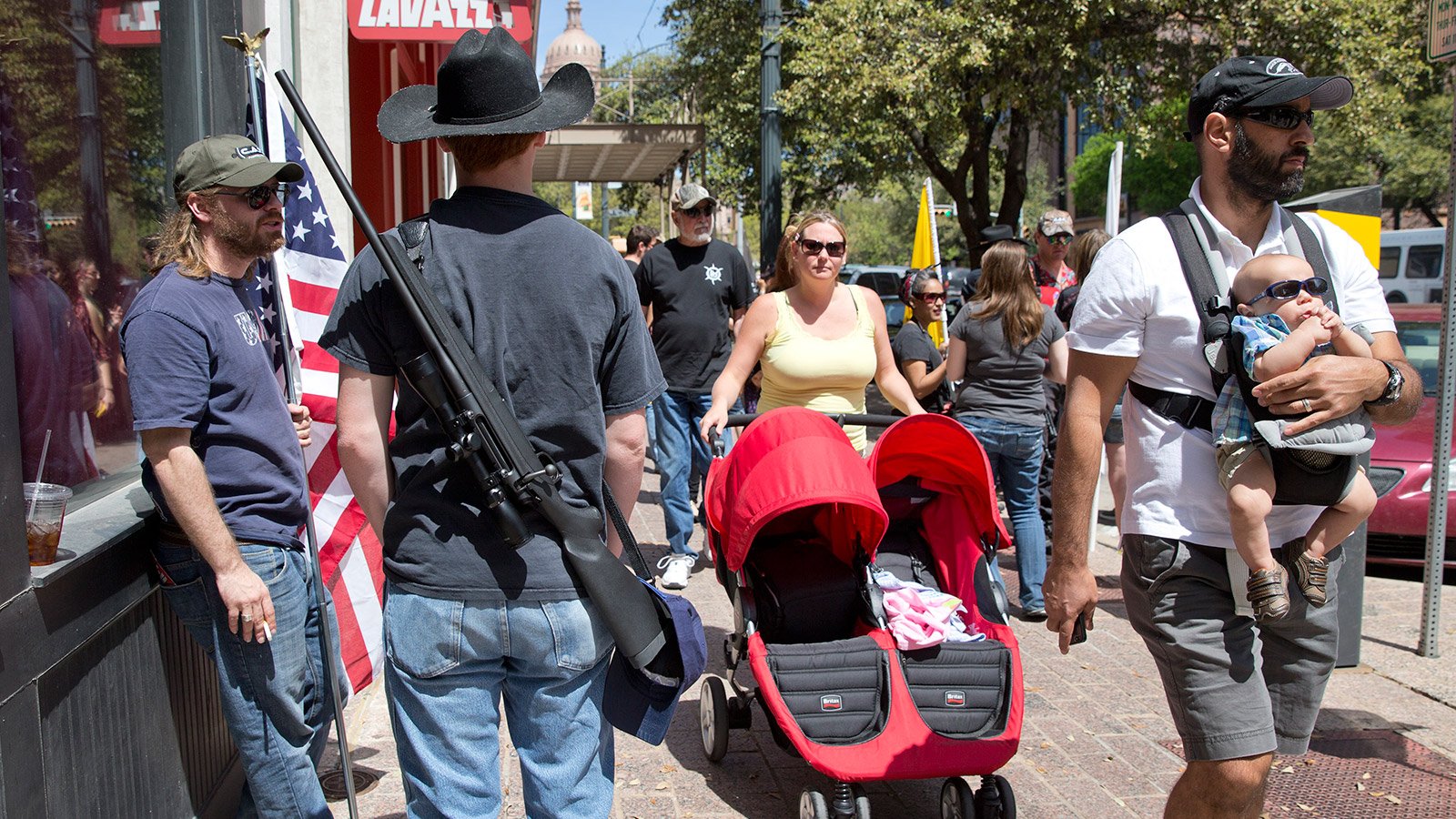 For most urban Canadians, the sight of someone walking through their neighbourhood with a rifle and shotgun over his shoulder prompts an immediate call to police—and a fear the worst is about to happen. Certainly, that was the horrific truth in Moncton, N.B., last week, as an openly armed Justin Bourque allegedly killed three RCMP officers and wounded two others in broad daylight.

The terrifying events in Moncton render even more incomprehensible the ongoing gun-law madness unfolding south of the border. In the United States right now, “open carry” gun activists are working hard to normalize the presence of armed men and women on streets, in parks and in stores. And yet, this battle to bear arms in as visible and provocative a manner as possible may finally have gone too far. At the very least, it’s given the famously powerful U.S. gun lobby cause for concern.

While Texas revels in its frontier image of cowboys and six-shooters, modern-day gun owners in the Lone Star state are prohibited from openly slinging pistols on their belts. Handgun owners must conceal their weapons, although rifles may be carried openly. To change the status quo, groups such as Open Carry Texas have lately been organizing protests in which supporters flaunt their AR-15 assault weapons and Mossberg SA-20 shotguns in public. “We are trying to make it as normal as possible for people to see a gun like a fashion accessory,” Open Carry coordinator Kory Watkins told the Fort Worth Star-Telegram. “That is the way it should be. This is America.”

Americans have always had a markedly different relationship with firearms than their Canadian neighbours, but the majority reaction to such in-your-face tactics has been surprisingly negative. Organizations such as Moms Demand Action For Gun Sense in America—funded by former New York mayor Michael Bloomberg—have generated widespread outcry among American middle-class families by publishing photos of gun-toting shoppers browsing the baby sections of Target stories, and other bizarre scenes. Restaurants, including Chipotle, Chili’s and Jack in the Box, have asked diners to leave their guns at home. And, perhaps most surprising, the National Rifle Association (NRA)—a proponent of bringing guns onto university campuses and employers’ parking lots—has suddenly become a voice of moderation.

In a commentary published on its website last week, an NRA staffer argued against Texas’s Open Carry rallies: “Using guns to draw attention to yourself in public not only defies common sense, it shows a lack of consideration and manners.” The NRA eventually removed the note and apologized. Nonetheless, its directorate appears to consider public gun displays as detrimental to the cause. In a recorded online debate with Open Carry organizers, NRA representatives Charles Cotton and Alice Tripp argue that shoving guns in the faces of families where they shop and eat risks turning the general population of Texas against further gun law concessions. “It is the vast majority of folks who are not NRA members, or [anti-gun group] Brady Campaign members, who are going to be influenced by this,” comments Cotton. “That is where the danger comes in.”

Divisions between states on the gun issue are also becoming starker. Of the five most populous states, California, New York and Illinois have the strictest gun laws in the country, while the other two, Texas and Florida, are among the most permissive (current debate over open carry notwithstanding). The greatest fear among gun rights advocates is that future demographics will not be kind to their movement. “The scary, scary thing to me,” says Tripp in the podcast, “is that [Texas] is growing by 750,000 people a year, and they’re not going to be our kind of people. They’re going to be coming from California and New York, and they will be bringing their laws with them.”

The legal and moral divisions between states over gun law are starting to sound an awful lot like the charged debate over slavery in the mid-1800s. Perhaps one day in the future, it will seem as outrageous and shameful to have argued in favour of letting Americans walk around armed to the teeth in their daily lives as buying and selling human beings seems today. We can hope.

No law will ever completely eliminate the risk of firearm homicides, as the tragedy in Moncton reveals. Yet, if the U.S. had the same rate of gun murders as Canada, there would be 10,000 fewer deaths every year. With this in mind, we pray that the sight of a heavily armed civilian walking down your street never becomes normal, wherever you live.

Maclean’s efforts across different platforms and formats were recognized last week by our peers at the National Magazine Awards, with the newsroom picking up four gold medals, one silver and 13 honourable mentions. Maclean’s awards included magazine website of the year, a gold for online video and best short feature for the story “Boy Genius,” and a gold for humour columnist Scott Feschuk. The honours confirm that, however you want to read, consume or experience it, Maclean’s delivers the best Canada has to offer.