Where in the world is Josée Verner? 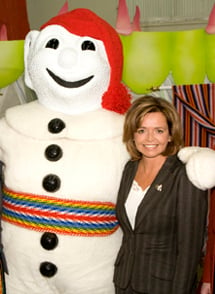 I think it’s safe to presume the Tories’ sweeping cuts to arts funding in Canada haven’t gone over quite as well as the Harper government had hoped. Sure, the National Post gave the cuts its predictable thumbs-up, but the government’s explanations have such gaping holes in them, it’s been hard to take any of them seriously.

Now, you’d think a government minister—perhaps even the one responsible for the erstwhile programs—would step up to clear the air. Fat chance. Heritage Minister Josée Verner’s been nowhere to be found, and her communications staff has been told not to answer questions from journalists.

Which brings us back to a fundemental question about the way ministers are selected in this government (and, perhaps, this country): Is Josée Verner’s job to be a decision-making, program-shaping, full-fledged cabinet minister? Or is it to be a Quebecer where there are too few?

So long as the Conservatives aren’t 100% sure they’ve got Mario Dumont’s base sewn up, it appears they’ll keep trotting out Quebecers at meaningless photo-ops to somehow prove they’re not like those other conservatives—you know, the ones that wouldn’t run candidates in the province—all while simultaneously barring them from doing anything that might resemble governing. At this rate, you’ll know an election is looming when Harper names a cardboard cut-out of Camille Laurin to take over inter-governmental affairs from Rona Ambrose. (Of course, he’ll have to name the cut-out to the Senate first.)

UPDATE: I’d be remiss if I didn’t point out that Verner did indeed grant CP‘s French-language service an interview yesterday. According to the heritage minister, the true beneficiaries of the cuts are—wait for it—the artists! “What we’re hoping to do,” Verner said, “is to look at how we could create a new program or new avenues that will be even more effective and have a stronger imapct for our culture outside the country.”

The doublespeak, in all its glory, is here.

FILED UNDER: Harper and Quebec josee verner welcome to panderville