REVIEW: My Song: A Memoir 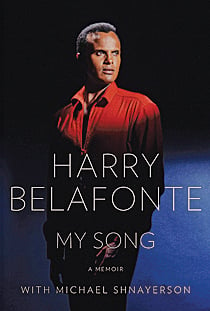 Few performers embody the cultural contradictions of the 1950s and 1960s like Belafonte: a committed progressive and activist for civil rights, a member of Martin Luther King’s inner circle, who also played Caesars Palace in Vegas and hosted The Tonight Show for a week. In part, the singer-actor’s memoir is about how he balanced show business and activism, and how the two aspects of his life informed each other. His fame as a singer came about because his belief in “folk music as a tool for social change” gave his material a global style others didn’t have: with his use of Caribbean, American, Hebrew and other music, his act featured “different voices, but a shared humanity.”

Many of the key moments in Belafonte’s career are here: the calypso album that outsold Elvis, his breakout role in the movie Carmen Jones, and the frustratingly limited range of movie roles he received after that (including a movie about interracial romance where he and his love interest were never allowed to kiss). But as he points out, his show business career was less huge than it might have been had he not devoted so much of his time to civil rights. Other entertainers merely hovered around the edges of the cause, and Belafonte is ambivalent about them: Sammy Davis Jr. was “desperate to please his white overseers,” and Belafonte often clashed with Sidney Poitier over his unwillingness to get more politically involved. Belafonte, on the other hand, wasn’t just a celebrity dabbling in politics, but used his fame to create a “strategic space” for politics.

After King’s assassination, both Belafonte’s causes and his career grew less focused, and so does the book. Some of the anecdotes are interesting, including his wary but friendly relationship with Fidel Castro, and his attempt to educate Castro about Cuban rappers. But the core of the book remains his ’50s and ’60s prime, when, as Belafonte tells it, “I wasn’t an artist who’d become an activist. I was an activist who’d become an artist.”

FILED UNDER: Harry Belafonte Michael Shnayerson My song: A memoir