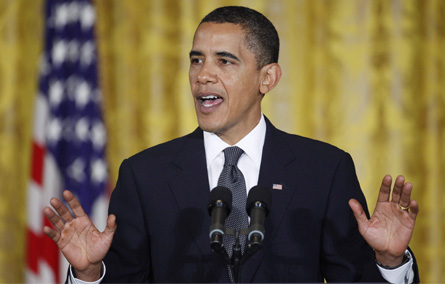 As Canadians, we have always venerated the Nobel Prize for Peace. Among the many illustrious winners throughout the decades, Lester B. Pearson stands out for us. The award has come to symbolize what is best among global leaders and the need to work in harmony to advance the cause of peace. Many win the award after years of persistence and accomplishments. The fact that Barack Obama unexpectedly won this award less than a year after his election is stunning. Most would agree that hope played a greater role than real achievement in this year’s selection.

The American far-right will no doubt criticize the choice and emphasize that nothing much has been accomplished by the new president. But the same crowd that applauded Chicago’s loss of its 2016 Olympics bid will have to find a new rationale for this one. Last week, it was a sign the world was rejecting Obama and not Chicago, as Glen Beck and Rush Limbaugh put it. Now, I guess it will be all about the world making a mistake about Obama—either that, or that the American President has yet to prove he is a real American and African emissaries skewed the results in his favour. Whatever the tirade, expect the far-right to go ballistic in the blogosphere.

That said, the message is clear: Obama has been welcomed on the international stage and is credited with changing the perception of American foreign policy. It is a testament to multilateralism and diplomacy rather than a prize for individual accomplishments. In that sense, it is quite unique in the annals of the Nobel Prize for Peace. When former presidents Theodore Roosevelt and Woodrow Wilson won their respective awards, they were in their second terms. Jimmy Carter won his prize many years after his presidency. Obama, meanwhile, has only made some promising early moves.

Still, Obama has already made some significant speeches in Europe and in the Middle East, reversed course on torture, announced the closing of Gitmo, brought a new approach to the Iraq war, opened new dialogues with Russia and China, pushed for a new dynamic with North Korea, and embarked on a multilateral approach to deal with Iran and the nuclear issue. He has also assigned full-time envoys to trouble spots like Pakistan and Afghanistan, and re-energized peace initiatives on the Israeli-Palestinian front. Of course, the results remain to be seen—diplomacy is a long and complex road. It requires patience and a desire to work within international organizations. One must favour dialogue over force without appearing weak and vulnerable. For instance, Obama has acted forcefully with Somali pirates, but opted for more gentle diplomacy in liberating journalists from North Korea. The Nobel committee is essentially saying they approve this direction and wish for him to continue.

Despite the skepticism and cynicism of critics, the award should be taken as a tribute to the American presidency and its power and influence over the pursuit of peace. America has over the years been an architect of many peace processes. It has been an instigator of many of the international organizations and forums that promote peace. Unfortunately, there have also been times where America was on the wrong side of peace and failed to live up to its promise. Now, there is hope that America is back on course. The choice of Obama this early in his term is an acknowledgement of this.