Why Harper should hire Bob Rae 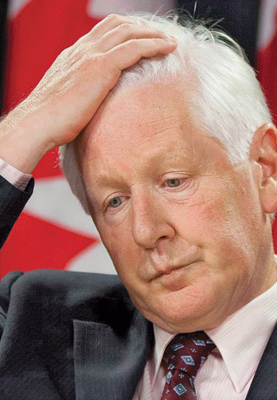 Bob Rae’s recent intervention in the continuing dispute between Canada and the United Arab Emirates over airline landing rights has earned him a rebuke from the National Post. Under the headline “Liberals forget they’re Canadians first,” the paper editorialized on how unseemly it was of the Liberal foreign affairs critic to have, er, criticized the Harper government, after meeting with U.A.E. officials in Dubai and Abu Dhabi, for its “ham-fisted” handling of the dispute.

While it conceded that “a case could indeed be made that Ottawa has been ‘ham-fisted’ in its approach to the U.A.E.”—could, and has: by Peter MacKay, among others—the paper nonetheless observed that “patriotic politicians don’t bash their own government on other people’s shores.” For his part, the Prime Minister’s spokesman, Dimitri Soudas, accused “the Ignatieff Liberals” of taking the U.A.E.’s side in the dispute, “rather than defend the interests of Canadian workers and the Canadian economy.”

Well, that’s one interpretation: Rae is sticking his nose where it doesn’t belong, and advancing a position that is contrary to Canadian foreign policy. The other is that he is auditioning for the role of Canadian foreign minister. Indeed, “a case could be made” he looks rather more convincing in the part than the incumbent.

It isn’t only in the current dispute, where Rae’s mature reflections, posted on his blog, on the mistakes on both sides that have needlessly escalated tensions, stand in contrast to the schoolyard taunts (“give me a break”) of the Prime Minister. There was also his leadership in proposing a role for Canada’s military in Afghanistan after 2011, in which regard he was ahead not only of the government but of large sections of his own party.

On both issues, moreover, his views seem, if anything, more conservative than the government’s: not only in the right, but on the right. Where the government was prepared to cut and run from Afghanistan, it was Rae who shamed them into staying, at least in a training capacity. And while the government’s refusal to allow Emirates Airlines landing rights in Canada can only be described as rank protectionism, it is Rae who has proposed a gradual opening of the Canadian market, and a sensible delinking of the issue with the question of Canadian access to the Camp Mirage air base in Dubai.

So natural does he seem in the role, in fact, that it seems only fair to ask: isn’t it time Stephen Harper appointed Rae as his foreign minister? It is not as if Rae has much to detain him in the Liberal party. That so much of his time is now spent overseas is in part owing to a genuine interest in foreign affairs, but also a genuine interest in not being around Michael Ignatieff. Relations between the two men are said to be poisonous, and while Rae, now 62, may still hope to succeed him after the next election, his chances of ever being in government grow dimmer the longer time passes.

For the Prime Minister to reach across the aisle, then, would obviously be in Rae’s interests, and arguably the Liberal party’s, removing a source of tension and division. And the Conservatives? With the possible exception of Harper, the party has no one of Rae’s gravitas or expertise in foreign policy. I do not know anyone who is even accidentally impressed with Lawrence Cannon as foreign minister, the latest in a string of ciphers and stumblebums to hold the job. Rae would add much-needed heft to the Conservative cabinet, and a credible voice for Canada overseas.

I know what you’re thinking. After the criticisms he has made of the government in general, and the Prime Minister in particular, how could he possibly join them? Didn’t he accuse the government recently of “treating foreign policy like a tool of domestic politics”? Well, yes, but the same critique could be made of Liberal foreign policy over the years (see Robert Fowler’s stinging speech to last spring’s Liberal policy convention). And, in the broad strokes, is there much to distinguish Rae’s views on foreign policy from Harper’s? On Israel? Afghanistan? NATO? NAFTA? Maybe on global warming, but as we seem to have outsourced our position on that to the United States, that need not present much of an obstacle.

Best of all, co-opting Rae would provide the government with a face-saving way of climbing down from its ridiculous posturing on the U.A.E. file. To be sure, the Emirates misplayed their hand by threatening to close the air base to us if they did not get their way: nobody likes bowing to threats, least of all Harper. But it never should have come to that. Opening the Canadian airline market to competition, from Emirates Airlines or anyone else, is not something we should grudgingly concede under pressure, but embrace in our own interest, for the lower prices and better service it promises Canadian travellers. If it costs Air Canada a few bucks, tough: we do not put planes in the skies to give airline workers something to do, but to fly airline passengers where they would like to go. (Emirates is subsidized, you say? Then it is Canadian passengers who are the beneficiaries.)

Is it likely to happen? No. Just now the government is busy impugning Rae’s patriotism, while he spits strangely phrased defiance (“forgive me for refusing to dress in pom poms and join Mr. Harper’s chorus line”). But I seem to recall some pretty harsh words also being exchanged shortly before David Emerson’s appointment.