Why only freedom can bring stability to the Middle East 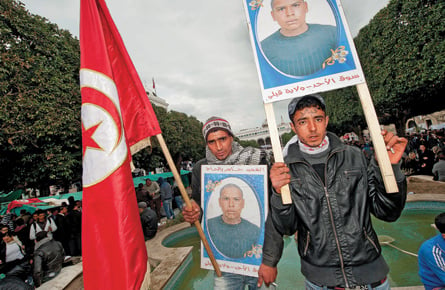 Ascribing the birth of an international movement to a single act by a single person may grossly misrepresent the process of history. Nonetheless, the tragic story of Mohamed Bouazizi readily explains the issues at play in Tunisia, Egypt and throughout the Middle East. And what must be done to fix the situation.

Bouazizi was, by all accounts, a hard-working if hot-tempered 26-year-old fruit and vegetable seller in the town of Sidi Bouzid, Tunisia; the $5 a day he earned supported his extended family and paid for his sisters to attend school. But in December his cart was confiscated by police for capricious reasons. When he went to local authorities to complain, his entreaties were rudely ignored. In protest and desperation, he then set himself on fire.

This extreme act is now recognized as the spark for mass riots that spread across the country and eventually forced Tunisia’s long-time dictator to flee. The protests moved to Egypt, gathered formidable strength, and pushed 30-year President Hosni Mubarak to announce he would not seek power again. Other countries have also come under siege by protesters. The king of Jordan replaced his entire government this week.

Bouazizi’s complaint was equal parts politics and economics. The produce seller’s primary preoccupation was in scratching out a living in difficult conditions. And when this was taken away from him, he looked for a government that was responsive to his situation. Without the prospect of either, he took the most dramatic action possible. This is a cameo version of the problems facing the entire region.

Despite a population of 83 million, $5 billion a year in receipts from the Suez Canal, a healthy tourism industry and ample U.S. aid, Egypt has been unable to provide its people with a way out of grinding poverty. Countries such as Brazil, India and China have all turned their size and resources to economic advantage, while corruption and strict state control have left Egypt a disappointing 137th in the world in per capita income (US$6,200). Tunisia is actually better off at 114th (US$9,500). Corruption and state control are endemic.

To hold on to power for these 30 years, Mubarak has claimed Egypt had only two choices: his iron-fisted rule or control by the outlawed Islamist group the Muslim Brotherhood. But this was only the case because he persecuted and repressed secular non-Islamist parties that offered greater choice and discourse. Only approved candidates were allowed to contest for the presidency and the most successful of those were thrown in jail. Emergency law has been in place since the 1980s and the press is strictly controlled. Last year, democracy watchdog Freedom House gave Egypt its second-lowest rating for political rights and freedoms.

Now we are witness to a movement that promises meaningful political reform across the Middle East and North Africa, perhaps in the same way that the people of Eastern Europe rose up against their oppressive regimes beginning in 1989 to demand self-determination. The twin universal imperatives of political and economic freedom have become legitimate and tangible objectives for this benighted region.

Of course the rest of the world also has aspirations for this part of the world—chief among these are stability and peace. Egypt’s civil relations with Israel are crucial in this regard and there are legitimate concerns about how Egypt will act if and when Mubarak leaves. The outcomes of the 1917 Russian and 1979 Iranian revolutions provide cautionary tales as to what can happen when radicals hijack the process of change. But this will not be the case if the transition to democracy is handled properly. (The Muslim Brotherhood has so far charted a moderate course in the protest movement.)

A functional democracy and robust economic growth are the best guarantors of long-term stability: citizens with a say and a stake in their country’s future are not likely to throw it all away on pointless wars or repressive rulers. Here again Bouazizi provides some practical evidence. He was neither a religious fanatic nor a political agitator. He was simply an ordinary citizen who wanted to be able to earn a living and have his concerns heard by government in an open and fair manner. That his story has become the central mythology behind this massive movement suggests these are the same things citizens everywhere in the region want as well. They want to be free to live their lives.

“There is a fine line between freedom and chaos,” Mubarak said in addressing his nation last week. But that’s only the case if you don’t believe in freedom.