Why the fuzzy face, Quebecor? 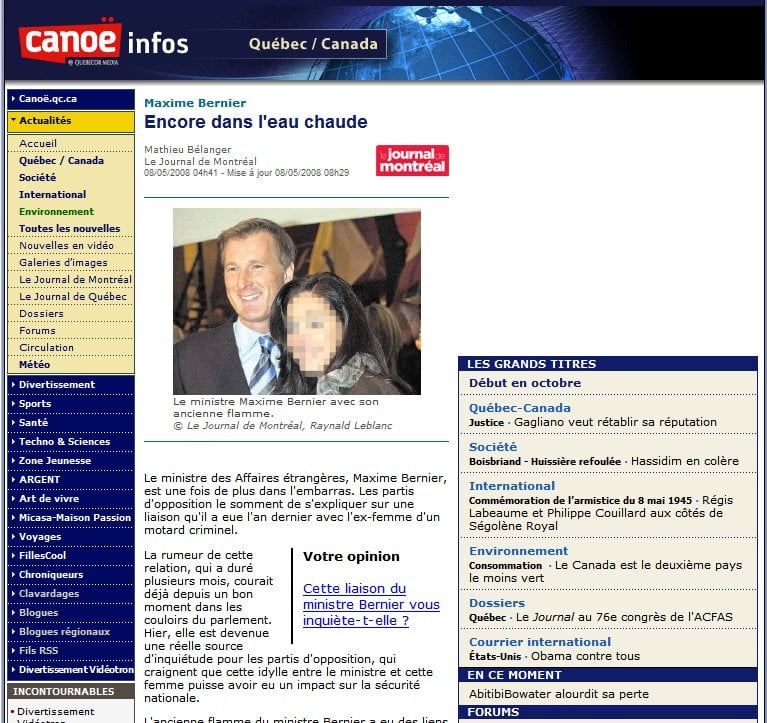 Much tittering about here in the Pretty Province over foreign affairs minister Maxime Bernier’s ex-biker-babe ex-girlfriend. La Presse devoted two pages plus a cover shot to our handsomely quaffed coiffed (if less-than-diplomatic) man from La Beauce; even the normally staid Devoir devoted cover space and two reporters to the tabloidy affair.

Which begs the question: how did the Journal De Montréal play the story? After all, the Bernier Affair (or ‘Berniergate’, as it will no doubt be known) is the perfect story for Quebecor’s flagship: A Quebecois cabinet minister, murderous bikers and the handsome woman connecting them all.

Le Journal put Maxime and Julie Couillard on the cover alright, but for some reason blurred Ms. Couillard’s face. In addition, neither the accompanying story, nor the blanketing news hits on the Quebecor- owned news channel LCN, named Mme. Couillard, unlike its competitors. For a paper that has prided itself on its crime coverage –– one of their reporters even took bullets for it — the move seems downright tame. The story has been percolating for months, and was on the tip of the tongue of just about every parliamentary hack yesterday.

Thx to Dominique for schooling me on ‘coiffed’…

Update: Still nothing from Kalogerakis, though a colleague of his wrote in today’s paper that Mme. Couillard wasn’t identified because she hadn’t been charged with anything. (I’d tell you more, but someone stole my damned Journal this morning, and I can’t find the article online…)