Why we don’t need another election 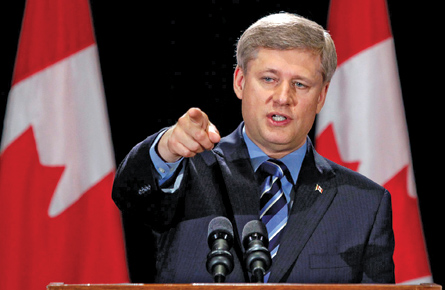 General elections are important moments in any democracy. As this magazine has frequently noted, they are the only time politicians seek a direct conversation with the public to explain their vision for the country and how it differs from that of their opponents.

But the prospect of a fourth federal election in five years, at a time of great economic uncertainty, leaves us convinced Canadians would be better served by a little less conversation and a lot more action. We don’t need another election right now. We need our politicians focused on the business of running the country.

Having worked hard to avoid a summer election, Prime Minister Stephen Harper now appears to be warming to the prospect of a fall vote. He has refused to co-operate with other parties and seems keen to hold a non-confidence vote early in the coming session.

The reasons for his change of heart seem obvious. It appears the global recession may not be as lengthy or as severe as was once thought, greatly improving the public mood. Federal stimulus money is also starting to flood across the country. Whether or not this has anything to do with the budding recovery, it is raising the profile of the Conservative MPs making these announcements. And as a proven leader and campaigner, Harper may feel he holds a near-term advantage over newcomer Michael Ignatieff, the Liberal leader.

For his part, Ignatieff claims he will be bringing down the Conservative minority at his earliest opportunity. “The Liberal party cannot support this government any further,” he vowed at his party’s summer caucus meeting in Sudbury this month. His speech gave four reasons why he thinks the Conservatives are no longer fit to govern—lack of Employment Insurance reform, lack of a deficit plan, delays on economic stimulus funding and the state of health care.
None of the four are particularly compelling. Harper is likely to offer some changes to EI this fall. The Liberals don’t have a deficit plan any more than the Tories do. The stimulus funding is flowing. And health care is less of a hot-button issue than it once was. A more believable argument is the observation that Canada’s economy appears to be improving. If such is the case, Ignatieff’s favoured line that the Tories have been insensitive and incompetent in handling the recession could soon be old news. He may feel the need to strike while the crisis is still hot.

So both leaders have strategic reasons for wanting a fall vote, but another election so soon after our last in October 2008 serves no higher purpose for the country.

It might be argued that the tough economic climate has created a demand for an election giving voters a choice between the distinct economic visions of the leading parties. Unfortunately, there is no sharp differentiation between Liberals and Conservatives on the economy, especially considering that Ignatieff supported Harper’s 2009 budget, which is now being implemented. Next year’s budget promises to be a more appropriate battleground. By then we will have real evidence on the success or failure of current policies, and with any luck the Liberals will have developed an alternative economic program. At that point it would be possible to have a proper debate on each party’s plan to unwind the $50-billion deficit (as projected by the parliamentary budget officer), among other issues.

Meanwhile, another election would only delay the legislative schedule and put key government promises at risk. The Conservatives have gone to great lengths to portray themselves as tough on crime. It would seem disingenuous to deliberately leave so much business in this area unfinished. Among the bills that would be swept aside by a fall election are pressing reforms to the sex offender registry plus important modernization of police monitoring of criminal electronic communications.

Finally, if Harper once again engineers an early election for himself, he’ll be making a further mockery of his own fixed election date legislation.

For Ignatieff, his leadership of the Liberal party is still only nine months old. Whatever advantages he sees to an early election, most Canadians are still unsure about who he is and where he’s heading. Recently released Liberal ads suggest he wants to reach out to India and China. That’s fine for a start, but hardly comprehensive.

EI is one of the few areas in which Ignatieff has drawn a bright line between himself and the Tories on a substantive issue. But his argument that a year’s worth of benefits should be available after just 360 hours of work seems facile and wholly unworkable. Canadians need a lot more substance on a much broader range of topics before they can pass judgment on the Ignatieff Liberals.

Besides, it’s the fall: summer holidays are over, the kids are back at school, everyone else is back at work. Why should government be any different? Elections may be good things, but Canada doesn’t need to make it an annual event. Back to work, Ottawa.