Or is she angling for the role of kingmaker? 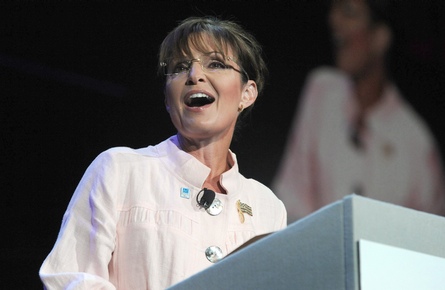 Like her or not, Sarah Palin will play a decisive role in who gets the Republican nomination in 2012. Since being plucked out of relative obscurity by 2008 GOP nominee John McCain, Palin has emerged as a celebrity in her own right. Anyone longing for the nomination will have to deal with her persona, her influence, and her supporters.

Along with Palin’s notoriety, the rise of the Tea Party movement has created a number of inviting venues for the Palin message. She is now a regular commentator on Fox News, adroitly uses social media to comment on current issues, and has a knack for picking eventual winners, even among opponents of Republican incumbents (the only exception being New York’s 23rd district, where Democrat Bill Owens benefited from a GOP party split ).

Does that make her the obvious Republican pick for 2012? Not quite.

She certainly  has the celebrity status to threaten even big-name Republicans like Mitt Romney, Newt Gingrich or Indiana Governor Mitch Daniels. But she still has significant credibility problems with establishment types like George Will, Kathleen Parker, and David Frum, and her politics fuel skepticism and doubt in independent voters. Palin also defends the controversial Tea Party without reservation.

Moreover, she has been sheltered by her handlers. Palin is very smart in the venues she chooses and avoids any forum where her views can be debated or challenged. Much is still made about her inability to handle tough interviews on policy and her occasional mangling of the English language. Some pundits believe she is running for president; others claim she is angling for the role of kingmaker.

Palin’s best option for the presidency may be to wait for 2016. The requisite star status, she has already; becoming presidential timber, however, requires time and the ability to handle a sharp learning curve. Either way, Palin has managed to make herself the person to watch out for this November.