Winning the hearts and minds with incompetence 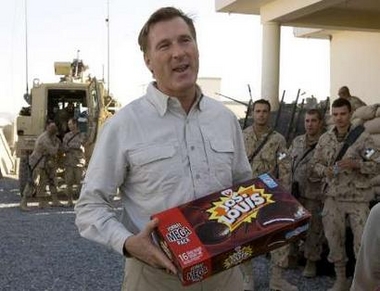 I was watching Andrew on At Issue last night when something Peter Mansbridge said struck me. I’m paraphrasing, but Mansbridge suggested, with a kind of wink-wink demeanor, that “we all know why Maxime Bernier was put into foreign affairs.” The idea being that Harper needed a native Quebecer to sell the war in Afghanistan to his own province.

It’s a widely-accepted notion, and I have no doubt Peter Mansbridge is right. (Josée Verner’s parallel appointment to international aid would seem to confirm it.) And now that Bernier’s run through diplomatic circles has mercifully come to an end, there’s already some fretting about which Quebecer might be promoted to take his place in cabinet.

But there’s a question I keeping coming back to: Why is it that federal governments seem convinced that getting a token Quebecer, no matter how inept, to sell Ottawa back to his or her home province is such a sure-fire strategy for success? Let’s go over some recent low-lights:

I’m sure I’m missing a few examples—and no doubt neglecting a few succesful strategies, too. But there seems to be a consistent pattern of tokenism ending up in disaster. And yet, we keep expecting it to happen again. Don’t get me wrong: there’s a long tradition of Quebecers doing admirable work in government. So why are they now being used in cheap vote-getting ploys?