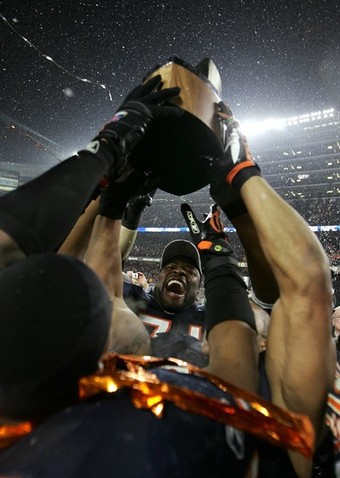 Israel — “Izzy” — Idonije packed on 20 pounds this summer. The Bears wanted him to focus on becoming a full-time tackle.

Izzy, who, last year, became the first Manitoban to play in a Super Bowl, was a walk-on at the University of Manitoba. He wasn’t offered a scholarship until his third year.

He’d only started playing football in grade 12, on a nine-man squad in tiny Brandon, where he grew up.

“At team meetings he was like a brook trout,” Bisons head coach Brian Dobie once told Maclean’s. “Jaw open, big eyes staring ahead—he couldn’t read plays, he had no stance, no confidence.”

He didn’t play a single game his first year with the Bisons. Or his second. When he finally touched the field, he exploded. This fall, he enters his 5th season in the NFL.

Said Dobie: “It’s like taking a kid from Atlanta, giving him a pair of skates in his senior year of high school, and four years later, he’s in the NHL.”

Yesterday, he was back in Manitoba, where his parents, both ministers, still live. His improbable story is one of my favourites in sports.