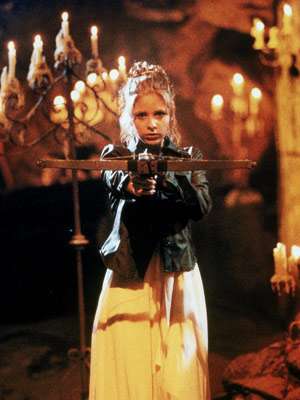 A new study from the University of Derby claims that, for the past 20 years, more than 50,000 women a year have left the Church of England because they don’t feel it speaks to them. But here’s the strange part, the study’s author, sociologist Kristin Aune, concluded that many of the younger British women leaving the church are instead taking up…Wicca. Why Wicca? Three words, Aune says. Sarah Michelle Gellar:

“Because of its focus on female empowerment, young women are attracted by Wicca, popularised by the TV series Buffy the Vampire Slayer.

“Young women tend to express egalitarian values and dislike the traditionalism and hierarchies they imagine are integral to the church.”

Huh. Clearly, Buffy was a very powerful (and sassy!) spiritual muse. But I was under the impression that Hollywood was after us to take up Scientology and yoga and Catholicism and Kabbalah and The Secret.

Make up your mind, TV and movies!