Yeah, what she said 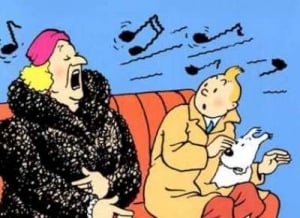 Pauline Marois (not exactly as shown) sings the Bloc’s praises

We had lots o’ laffs taking the piss out of Michael Fortier yesterday, we did. By declaring that the Bloc Québécois has been a waste of 18 years and $350 million–and displaying as much on a truck-mounted billboard, and parking said billboard in front of Gilles Duceppe’s riding office–Fortier made a less-than-subtle jab at those who voted for the sovereignist party. Gilles Duceppe was suitably infuriated. It was crass and gauche and all of that but as it turns out, during this campaign at least, not at all unprecedented.

There’s some explaining to be done after the jump here, Pauline Marois.

In its forum section today, La Presse published the bon mots of someone named Christian David from Saint-Lazare:

“[Gilles Duceppe] makes me laugh. The Conservatives’ latest ad campaign angered him because, according to him, it attacked the intelligence of those who have voted for Bloc since its inception. In contrast, no one made a peep when Pauline Marois accused NDP supporters and the Conservatives of having screwy neurons. Isn’t this another way of suggesting that supporters of other parties are imbeciles?”

And yes, Ms. Marois did indeed utter as much last week, screwy neurons and all, at a press conference last week. And yes, the quotation was buried at the bottom of a couple of news stories. But that’s not all. Mme. also Marois chucked in Elizabeth May and a soupçon of old-school xenophobia. To wit:

“If someone thinks that Jack Layton or Elizabeth May is better placed to defend the interests of Quebecers than the Bloc Québécois, I think they should make sure they have their neurons in the right place.”

“Neurons in the right place.” Man, she must be fun at parties.