You say ice cream, or gelato. I say granita 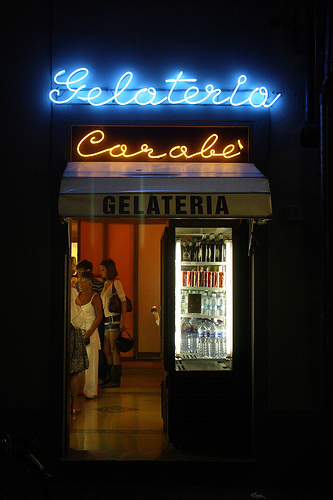 Did you hear that a museum is opening up in September outside of Bologna in Italy solely dedicated to gelato? That sounds like a magical place. Curator, and gelato historian, Luciana Pollioti, has even secured the first-ever recipe of the confection dating from the 17th century for the museum’s collection, which will also feature 10,000 documents and photos, plus 20 old-timey gelato-making machines.

Pollioti told the Telegraph that primitive methods of making gelato in Italy began about 3,200 years ago when snow and ice would be gathered from mountain tops.

Anyway, this time of year I always remember that I can never remember the difference between gelato and ice cream and, seeing that I like them both, I always forget to follow up. Not today: I don’t have my Harold McGee here, but according to Bon Appetit, it comes down to two things: the amount of fat and the amount of air whipped into the ingredients. Ice cream usually has more of both, which is why gelato tends to be denser.

But you know what I would choose in a heartbeat over either gelato or ice cream? A cup of almond granita from Carabé in Florence, a stone’s throw from the Accademia museum. They specialize in Sicilian treats, including granita, which is essentially just sugar, water and a flavour that’s blended and semi-frozen. I think about their creamy almond offering nearly once a week. It wasn’t too sweet, and its texture occupied this enchanting netherworld between smooth and crunchy.

I’ve never had anything like it since.  I suppose I could make it myself but there’s something quite pleasant in going out at sunset for a passeggiata, even outside of Italy–although it’s not quite the same–and securing a frozen treat.

With the number of artisanal gelato shops that’ve opened up in Toronto over the last few years, surely a shop dedicated to good granita must be next.