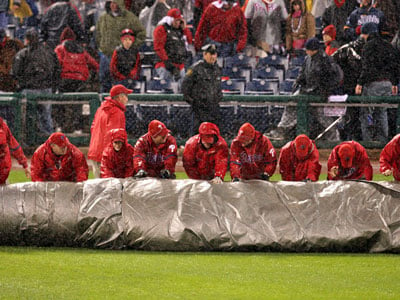 Now ya tell us

Lot’s of scorn for MLB and Bud Selig this morning for allowing Game 5 to drag on til the middle of the sixth before bowing to apocalyptic conditions. Not surprisingly, much of the anger originates in Philly, where fans may be sensitive to the fact the authorities waited just long enough for the Phils to squander a two-run lead before calling in the tarps. According to local polls, only town drunks and people who don’t know which end of the bat to hold believe Buddy Boy should have dithered so long.

But here’s a better question: what the hell kind of meteorological advice were they getting? The rain was only starting to come down when Dave O’Brien and Rick Sutcliffe assured me that the forecast called for nothing worse than what we were seeing. Then someone cued the sleet.

Now I read that snow is in the Citizen’s Park forecast for tonight. I say play ’em. It’ll probably be the best weather Philadelphia has ever had in late October. Which is not admittedly a time they’re accustomed to playing.