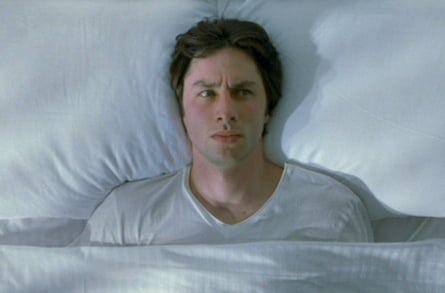 On Wednesday, in the wake of the enormously successful Veronica Mars Kickstarter campaign, the Scrubs star launched a crowd-funding campaign to make his next movie. For the next 30 days, he’ll try to raise $2 million on Kickstarter for Wish I Was Here, a film he co-wrote with his brother Adam.

Braff’s movie is the most notable film project since Rob Thomas sent shock waves through Hollywood by turning to fans to resurrect his long-cancelled, cultishly adored private eye TV series. While Kickstarter has for years been a helpful source of financing for small independent films, Veronica Mars showed it could also be a galvanizing platform for bigger names, greater sums and larger scale movies. With 91,585 backers, Veronica Mars pulled in $5.7 million.

“I, like most of Hollywood, stared at the screen with my jaw dropped open, going: ‘Oh my God, it does work,'” Braff said in an interview Tuesday ahead the campaign launch.

That it has come to this for Braff to get a chance to direct again is surprising. Garden State, an indie rock-infused story of wayward 20-something life in New Jersey, was a modest hit and tapped a generational nerve. It earned $35.8 million worldwide (more than 10 times its production budget), won a Grammy for best compilation soundtrack and memorably featured Natalie Portman offering her headphones with the promise that a Shins song will “change your life.”

But even after Garden State, Braff’s efforts to direct a screenplay of his own in between Scrubs seasons never got off the ground. He says finding financing has been the impediment.

He was able find an investor for Wish I Was Here, but not on the terms he seeks. The financier willing to bankroll the film (Braff declines to name the company) wouldn’t give Braff final cut or allow him total casting control. Ultimately, Braff is appealing to Kickstarter users for artistic freedom.

“As we were negotiating the deal, this Veronica Mars story broke about what Rob Thomas had accomplished,” says Braff. “That’s when my producers and I decided to stop talking about trying to wrap our heads around this deal, which didn’t seem very fair to us, and decide whether or not we were going to roll the dice and go for this.”

In a video on his Kickstarter page, Braff pledges this approach enables him to produce “the truest representation of what I have in my brain.” He calls the film “a continuation of the tone” of “Garden State,” in which he stars as a struggling actor whose financial trouble leads him to home school his two children.

Braff, 38, isn’t new to crowd funding. He has contributed to other projects on Kickstarter and has gotten involved with the micro-loan non-profit Kiva.org.

But he considers his Kickstarter campaign a gamble since he won’t be treading on a familiar property like Veronica Mars. Thomas, in the midst of his Kickstarter run in March, told The Associated Press he was skeptical of the model working right now for all $3-$5 million movies.

“When there is a brand name product that people have responded to and want to see there’s already a built-in following for it, people can be very successful,” Thomas said.

But Braff hopes his name is a draw. It does, after all, count for a lot to fans of Garden State, his nine seasons starring on the hospital sitcom Scrubs and his million-plus Twitter followers.

“I have no idea if it will work,” says Braff. “I’m saying to my fan base: Hey, if you like the things I’ve done before, here’s a bunch of information about the next thing I want to do and I’d love you to be a part of it.”

Braff hopes to begin production in Los Angeles this August and have the film finished in time to submit it to the Sundance Film Festival. Finding domestic distribution at the festival would follow the path of “Garden State,” which Fox Searchlight picked up at Sundance. Braff says he’s putting his own money into the film as well, and has interested additional investors if he’s able to raise money through Kickstarter.

The levels of backing range from $10 for a continually updated production diary and a digital copy of the screenplay up to $10,000 for a role with a line of dialogue.

Some have derided Kickstarter as “panhandling.” Others disputed the Veronica Mars enthusiasm by noting the Warner Bros. series was a corporate-owned project. Contributors pay for particular rewards, but they don’t share in the profits. Kickstarter, which declined an interview request for this story, takes a five per cent fee of collected funds. Processing fees of three per cent to five per cent go to Amazon Payments or other processors.

But finding financing for independent films, never a cake walk, has been particularly difficult in recent years as studios have cut back on riskier projects. And after years of struggling in the Hollywood system to follow up “Garden State,” Braff is eager to return to the director’s chair.

“I love it more than anything,” he says. “Making Garden State was the most fun experience of my life.”