Zero-Sum Future: American Power In An Age Of Anxiety 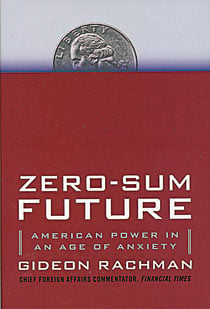 Two symbolic moments bracket the modern era—as distinct from the contemporary Age of Anxiety—in the opinion of Financial Times columnist Rachman. The now-vanished Age of Optimism—the time of globalism, rising prosperity and spreading democracy—began without fanfare in December 1978 when China started to liberalize its economy. It culminated at the Davos Economic Forum in January 2009 when one of the world’s leading Communists, Chinese Prime Minister Wen Jiabao, told a packed seminar that, to better understand the financial crisis, he had been “rereading Adam Smith.” This was shortly after, Rachman notes, French President Nicolas Sarkozy was photographed reading Marx’s Das Kapital. Rachman wanted to emphasize two points: world governments are currently floating free from their ideological moorings, and the massive economic clout wielded by China’s distinctly illiberal capitalist economy.

Rachman spends most of his book (the cheerful part) bringing readers up to the present: the economic deregulations of Ronald Reagan and Margaret Thatcher; the eastward expansion of the European Union; the fall of the Soviet Union; China’s rise from poverty; Latin America’s movement away from closed markets and military dictatorships; India’s opening to world trade. In this version of the last three decades, 9/11 is a blip, a violent eruption of old antagonisms from a part of the world that had notoriously turned its back—until last month—on modernity. No, the real break from the good times, Rachman asserts, came with the financial meltdown.
Before then, all the world’s major players thought globalization was working for them. Now they are no longer sure a rising global tide lifts all boats. The 1930s idea that gains for one nation are losses for another—a zero-sum equation—is alive again, ratcheting up the pressure for the sort of beggar-thy-neighbour
protectionism that preceded the Second World War. And with international fellow feeling at low ebb, Rachman sombrely argues, the world’s problems—which, from climate change to nuclear proliferation, are more global than ever—are now more intractable than ever.