‘If we hadn’t had our rum, we would have lost the war’

Here's a look at what Canadian soldiers ate and drank to sustain their bodies—and First World War efforts. Many looked forward eagerly to their daily rum ration. 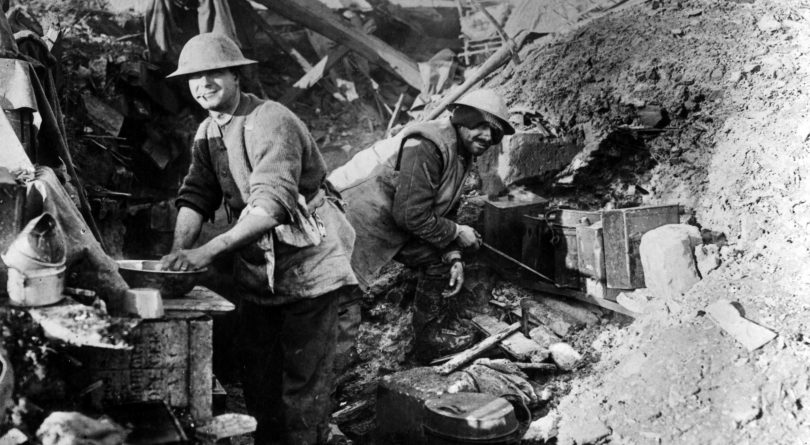 A Canadian cook with his helper at work in a battlefield cookhouse in November 1916. (Universal History Archive/UIG/Getty Images)

The Canadian Corps marched on its stomach. The 100,000 men in the Corps’s four divisions had to be fed each day, and this required enormous effort. The daily requirement for each man was 4,300 calories, a clear recognition of the fact that soldiering was hard physical labour. The rations included tea, sugar, bread, cheese and tinned jam of an indeﬁnable kind. The meat was sometimes bacon or tinned beef from Canada or Argentina, or canned Maconochie stew from Scotland—mainly turnips, potatoes and carrots in a watery broth. There were very few fresh vegetables and fruits, though the Canadians ran farms behind the lines to grow as much as they could for the front. No one was supposed to drink water from streams or shell holes, but thirsty men sometimes could not wait for potable water to be brought forward in gasoline cans. Soldiers drank hot tea whenever they could.

RELATED: The First World War brought the end of cavalry and the advent of the tank

The soldiers also looked forward eagerly to their daily rum ration, though some brigade commanders were teetotallers and insisted on providing hot soup or lime juice instead. The rum was brought to the front in gallon jars, and the daily two-ounce ration was doled out carefully and had to be drunk at once to stop hoarding. The alcohol was warming, and it fortified the courage of men in an attack. “We always get a drink of rum before we start anything,” one soldier wrote home in late August 1918, “and then we can go through fire or do anything.” Others claimed that “if we hadn’t had our rum, we would have lost the war.” If casualties were heavy, as they so often were, the extra rum was often shared out to the survivors.

Early in the war, small groups of soldiers cooked their rations over small camp stoves, or “tommy cookers,” fuelled by solidified alcohol. Later, company cooks prepared the rations centrally, sending hot food forward to the trenches in insulated containers. Bert Lovell, serving in the 8th Canadian Field Ambulance, remembered that the cooks had “the Mulligan Batteries [stoves] going as we march northward.” The food was awful, full of jute fibres from the sacks in which it was brought forward. “The bread pudding would have made good plaster,” Lovell said. “Sgt. Davis, head cook, waves our complaints away with his usual ‘If you don’t like it, see King George.’ ”

Parcels from home were eagerly awaited. Every man craved cookies and cake, sweets of all kind, and canned salmon and tins of fruit. Roy Macfie from the 1st Battalion wrote home gratefully that he had just eaten “a lot of candies and a big piece of dandy fruit cake all the way from Canada,” treats that he had almost certainly shared with his mates. Any soldier who kept his goodies to himself would be unpopular.

The officers ate better than their men. Lt. Ivan Maharg of the 1st Canadian Mounted Rifles was his regiment’s mess president, and he told his parents that while the officers had just enjoyed a good lunch, they “are kicking at me for not feeding them fresh meat.” Poor harassed Maharg sent a sergeant out to try to buy meat from French farmers. “I doubt if he can, there’s not much here.” Officers each contributed a portion of their pay for “extra messing,” but the French economy near the front had been devastated and there really wasn’t much food available. In the trenches, the officer’s batman, or personal servant, prepared the food. “Once he had a pretty fair looking meal ready to give me,” Maharg wrote, “when a big shell burst so close that he kicked over the tea and spilt some bacon he was trying to fry.” In the attack, officers and men alike ate their emergency rations of hard tack and tinned meat.

The army rations were not pitched at gourmets, but they did their job. The best evidence of this was that on average British and Canadian soldiers gained six pounds in the army.