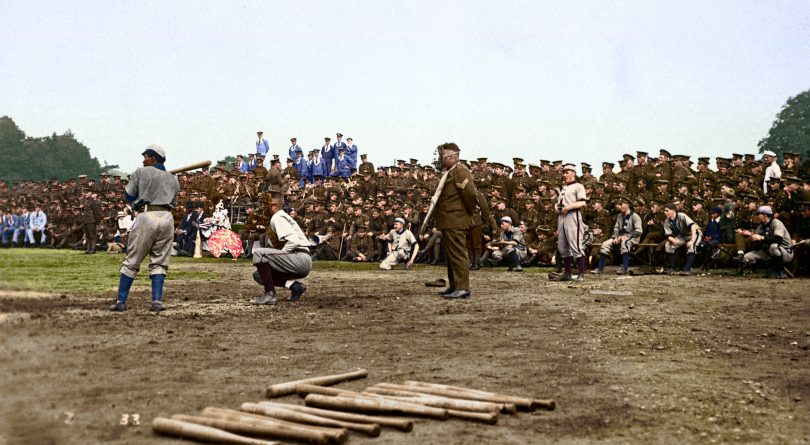 A new book by the Vimy Foundation, 'They Fought in Colour,' collects 260 digitally colourized photographs showcasing Canada's contribution to the war. In this image, a game of baseball at Camp Smiths Lawn, Sept. 1, 1917. (Box 3849, Access 177-288 photo album 2/ PA-118481/Library and Archives Canada/Vimy Foundation).

Art and sport are part of what deﬁnes us as human, even when faced with inhuman conditions. During the First World War, on the front lines and anywhere else troops were assembled, trained or taken to heal, games and entertainment emerged organically in the most dire circumstances imaginable. We want to play; we want to sing and dance and be entertained; we want to laugh and cry and cheer and interact as an audience. That’s true even near the battleﬁeld.

Of course, there was also a practical, military rationale for encouraging troops to participate in sport. It helped keep the men ﬁt and ready for combat during long, boring stretches of inactivity, and it provided an easy boost in morale, as did the presence of many of Canada’s greatest athletes among the ranks. Some of the sports themselves even mimicked skills that were useful in ﬁghting a war—fencing and boxing, for instance, both of which were staples.

But more often the men (and the women behind the lines) recreated their favourite games from home as best they could. The British and those in their cultural orbit sought out patches of level ground where they could set up some stumps to play a makeshift game of cricket, or they found an open ﬁeld that wasn’t too pockmarked for a rough-and-tumble rugby match.

The No. 1 sport, though, on both sides of the lines, was soccer—football, to most—because of its simplicity. All that was required was a ball, an open space and something to stand in for goalposts (actual posts, a crossbar and netting were very much optional). Among those serving in the war were some of the ﬁnest players in the world at the time, so the calibre of play could be quite high. Initially, the matches were informal, ad hoc pickup affairs, but as the war dragged on, battalion teams were organized, scores kept, results recorded, and the spirit of healthy competition prevailed.

The Canadians and the Newfoundlanders were certainly familiar with those British games, but they also brought with them sports that were distinctly North American: baseball, whenever someone could round up a ball and bat and gloves, and in wintertime, if there was ice, if there were skates, a game of shinny would inevitably break out, providing both some much-needed fun and a reminder of home.

There were also plenty of other, less vigorous ways to pass the time. Card games of every sort were the most common, and could be organized even during a short lull in battle.

Some of Canada’s most celebrated athletes of the era joined the war effort, including six who had represented the country in the Olympic Games. 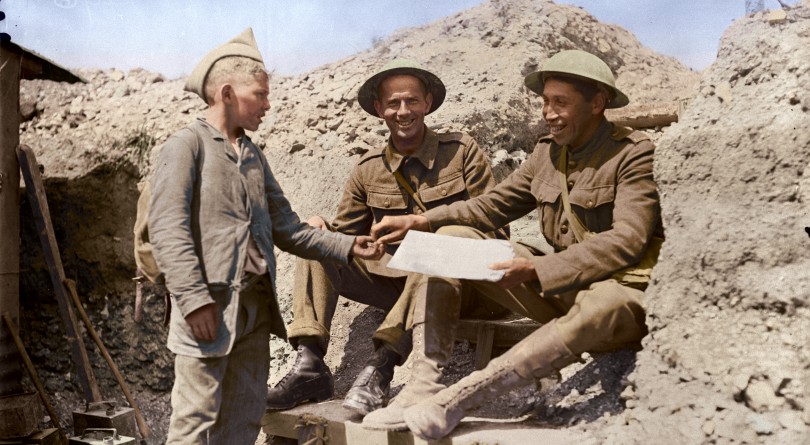 Star athlete Cogwagee, or Tom Longboat (right), was a messenger in the army, where his long-distance running skills served him well. June 1917. (PA-001479/Library and Archives Canada/Vimy Foundation).

Cogwagee—Tom Longboat—was one of the great sports stars of the early 20th century. An Onondaga from southern Ontario, Longboat won the Boston Marathon in 1907. He was one of several favourites who collapsed before ﬁnishing the race at the 1908 Olympics in London, but he won a rematch staged at Madison Square Garden in New York, then turned pro and was crowned the professional champion of the world. Longboat was a messenger in the army, where his great distance-running skills served him well. He was wounded twice, but made it home, retired from competition, and died in 1949.

Percival Molson was a terriﬁc all-around athlete, a member of the Stanley Cup-winning Montreal Victorias in 1897, the world record holder in the long jump for a time, and a member of Canada’s Olympic team in 1904, running the 400-m. Molson was badly wounded in the Battle of Mont Sorrel in June 1916, but recovered and returned to the front, where he was killed a little over a year later in Avion, near Vimy Ridge. He left money in his will to help fund the construction of a stadium on the McGill University campus. It stands there still, named in his honour, the home of both the university’s football team and the Montreal Alouettes.

“One Eyed” Frank McGee was one of the most electrifying hockey players of his day, despite standing only ﬁve foot six and being blind in one eye as the result of an accident. He was the star of the famous Ottawa Silver Seven that won four straight Stanley Cups from 1903 to 1906. In 1915, he enlisted in the 43rd Regiment (Duke of Cornwall’s Own Rifles). After suffering a knee injury, McGee was offered a post behind the lines but insisted on returning to the front. In September 1916, he was killed near Courcelette, France, during the Battle of the Somme. His body was never recovered.

More remembered as a builder of sports than an athlete, Conn Smythe was a veteran of both world wars. He was awarded the Military Cross for valour on the battleﬁeld while serving with the artillery, then transferred to the Royal Flying Corps, where he was shot down while working as an aerial observer, and spent the last 14 months of the war in a German prisoner-of-war camp. After the war, Smythe returned to Toronto, where he eventually bought his own hockey team, the Toronto St. Pats. Smythe changed the team’s name to the Maple Leafs, built them a magniﬁcent new arena on Carlton Street during the depths of the Depression, and the rest is history. 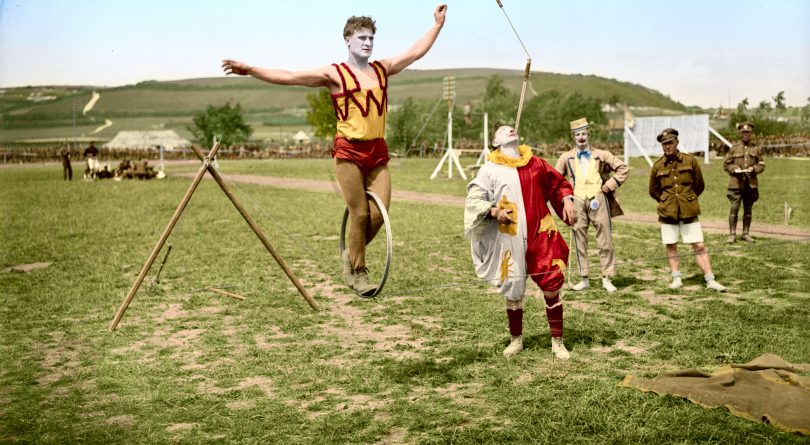 Music was also an important diversion for troops during the war. In addition to the formal military bands, if a soldier could play an instrument or was blessed with a ﬁne singing voice, his comrades would call out for a tune. As with athletes, some of the best professional musicians were in uniform during the war, and their talents were particularly sought out.

Eventually, more elaborate entertainments evolved, at ﬁrst as makeshift shows, troops entertaining their fellow troops, and later as organized companies who travelled the battleﬁelds to lift spirits—the precursors of the larger touring shows of future wars. During the First World War, the most distinctive were the “Pierrot shows”—or “concert parties”—an offshoot of a popular art form of the time that had ﬁrst emerged on the piers of English summer seaside towns like Brighton and Blackpool. The performers dressed in homemade Pierrot costumes—white painted faces, ruffled collars, pointed hats—and sang, danced, juggled, performed skits and told jokes in the music hall tradition, with much of the material relating to life in uniform. Often, one or more of the men involved would perform in drag.

During the war, a group of soldiers formed one of these concert parties and went on to be arguably the ﬁrst true international Canadian stars of the entertainment world. In 1917, near Vimy Ridge, 10 members of the Canadian Army 3rd Division got together under the direction of Mert Plunkett, who in his civilian life back in Orillia, Ont., played trombone and piano. When the war began, Plunkett became the YMCA entertainment director attached to the 35th Infantry Battalion, a role in which he organized various entertainments and concert parties from which “the Dumbells” were born. The name came from the 3rd Division’s emblem, a red dumbbell symbolizing strength.

They played their ﬁrst show in August 1917 in Gouy-Servins, France, in the Passchendaele combat sector, and were an immediate hit with Canadian troops, performing such crowd pleasers as The Wild, Wild Women Are Making a Wild Man of Me, I Know Where the Flies Go and their theme song, The Dumbell Rag. Touring the front lines, what became a 16-person company brought along their own curtains, costumes and even an upright piano.

The Dumbells would prove to be more than merely a battlefront phenomenon. In 1918, the troupe played a four-week engagement at the Coliseum theatre in London, England. The day after the Armistice, they produced their own production of H.M.S. Pinafore in Mons, Belgium, which ran for more than a month and was performed for King Albert of Belgium. The Dumbells continued to entertain troops during the months of demobilization in Europe, then Plunkett and company decided to take their chances as professional entertainers back home in Canada. Following rehearsals in Orillia, the Dumbells’ revue Biff, Bing, Bang opened at the Grand Opera House in London, Ont., on Oct. 1, 1919, which was followed by a 16-week run at the Grand Theatre in Toronto. They toured the Canadian vaudeville circuit 12 times in the next 13 years and, in 1921, made their debut on Broadway—the ﬁrst Canadian musical revue to perform on the Great White Way—playing to audiences ﬁlled with war vets.