How Canada broke through Germany's critical Hindenburg Line in 1918

Canadians knew that fighting past the Drocourt-Quéant Line would be costly. But they won an important victory in their renowned Hundred Days march to the end of the war. 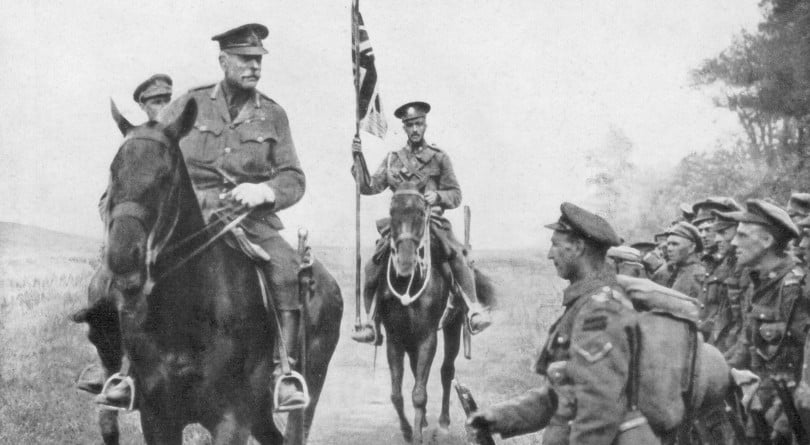 Field Marshal Douglas Haig reviewing Canadian troops, Drocourt-Queant, France, 31 August 1918. Two days later the Canadians attacked and broke through the German defences of the Drocourt-Queant Line. Haig (1861-1928) served as Commander-in-Chief of the British Expeditionary Force (BEF) from December 1915 until the end of the war. (The Print Collector/Getty Images)

Back on the Arras front after its stunning victory at Amiens, the Canadian Corps immediately began to prepare for its next operation. Under the overall leadership of French Marshal Ferdinand Foch, the Allies aimed to maintain pressure on the Germans with a continuing series of all-out offensives. The Canadians’ task was to break through the Drocourt-Quéant Line, the hinge of the enemy’s Hindenburg Line.

Lt.-Gen. Sir Arthur Currie, the Corps commander, knew at once that this was no simple task. First, his troops had to fight their way through strong defences in front of the D-Q Line and then crack that line open. To do this, Currie had huge artillery resources, but few of the tanks that had been so useful at Amiens. Still, the Canadians did have substantial air support when the artillery barrage opened up at 3 a.m. on Aug. 26. Night attacks were the most difficult operations of war but surprise was a powerful weapon.

The attack by the Second and Third Canadian Divisions started well, the troops taking the key positions of Orange Hill and Monchy-le-Preux before 8 a.m. But the enemy was resisting fiercely, his machine gunners—all picked, well-trained soldiers—inflicting heavy losses. The 116th Battalion, for example, lost its commanding officer and some 300 men in taking its objective and driving back repeated strong counterattacks.

One officer, Lt. R.C. Germain of the Second Division’s 20th Battalion, wrote to his mother that his men had taken an enemy position and heard the Germans shout “Kamerad!” while raising their hands. “All the ‘Kamerad’ they got was a foot of cold steel thro them from my remaining men while I blew their brains out with my revolver without any hesitation.” Germain added, “You may think this rather rough but if you had seen my boys go down you would have done the same.” By night on the 26th, the Canadian Corps had moved the line forward by five kilometres.

For two more days, the Corps faced fierce opposition. Losses were more than 5,800, and many battalions suffered very heavily. The 22nd Battalion, the already-famous Van Doos, lost all its officers including Maj. Georges Vanier, a future governor general, who was seriously injured.

Now the hard part began, the breaking of the D-Q Line. The German positions were deep, with concrete bunkers housing machine guns with interlocking fields of fire. The only way the bunkers could be eliminated was with fire and movement tactics, brave men crawling forward and using rifle grenades or their Lewis machine guns to eliminate the opposition. The attack went in at 5 a.m. on Sept. 2 behind a massive rolling barrage, the infantry accompanied by two companies of tanks and much air support. Some opposition from the seven enemy divisions on the D-Q Line collapsed under the barrage, but many Germans resisted to the end. Fighting continued into the evening of Sept. 3, but the Canadians had breached the Drocourt-Quéant Line. The butcher’s bill was 297 officers and 5,325 other ranks.

As always, most of the casualties came from the 25,000 men in the 24 battalions that had made the attack. The losses of experienced soldiers could never be made up, but the Canadian Corps continued to receive reinforcements from its depots in England and from conscripts reaching the front from Canada, the product of the divisive Military Service Act that the government put into effect after the December 1917 election.

Nova Scotian Lt. Clarence Gass of the 85th Battalion wrote his wife on Sept. 9 saying that he’d survived “the hardest scrap I’ve been through. I was very fortunate as I came out without a scratch. The battalion had the honour of taking one of the hardest parts of the line and the boys sure did the job well.” Gass added that “I had the satisfaction of ‘getting’ two of the blonde brutes. At least I am sure of two and I think I got several more.” But “there are only a few left that were with me in the old days.”

The Canadians received much praise for their success, and Currie, while mourning the losses, considered the breaking of the D-Q Line a greater victory than the Amiens battle a month before. The Germans now retreated eastward to the Canal du Nord, taking up positions on the far bank. Getting across the canal would be the next operation for Currie’s soldiers.