They hang in schools across the country, and often unnoticed: The 'For King and Country' scrolls by the Group of Seven artist A.J. Casson 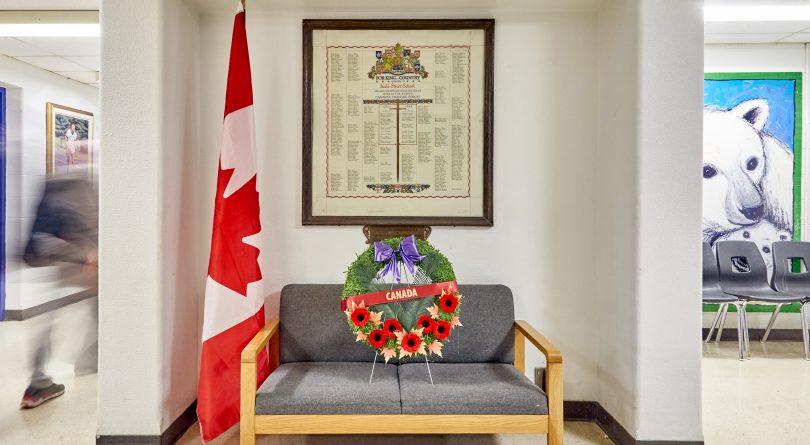 The honour scroll at Keele Street School in Toronto. (Photograph by Christie Vuong)

On a recent visit to his daughters’ elementary school, Toronto art historian Gregory Humeniuk spotted a curious detail on a familiar Second World War memorial hanging in the foyer. Mounted near the principal’s office at Keele Street Public School, the memorial is a large, framed honour scroll, decorated with a brightly coloured and intricate coat of arms and emblazoned with the phrase, “For King and Country.” Below are several columns of meticulously inscribed names—of the men and women who had attended Keele as children and later went off to fight in Europe or Asia. The ones marked with an asterisk died in action. The women’s names include “Miss” or “Mrs.” in brackets.

While the scroll itself is visually striking, the artist’s neatly printed signature, located in the lower right corner, is intriguing: “A.J. Casson.” One of the members of the Group of Seven, Casson (1898-1992) is renowned for iconic paintings of rugged northern landscapes and moody outposts. Says Humeniuk, “I saw his name on it, and I thought, ‘What the heck?’”

There are, in fact, hundreds and possibly thousands of Alfred Joseph Casson’s WWII honour scrolls hanging in schools, churches, legion halls and other community spaces across Canada. The Toronto District School Board alone has documented 102 of these Casson-created memorials that hang or once hung in the city’s schools, according to archivist Greg McKinnon.

When my kids were attending a century-old public school in Toronto’s west end several years ago, a friend first pointed out the Casson signature, and I’ve been looking out for them ever since. I once came across a pair of his scrolls hanging in a gas-station snack bar in Chamberlain, Sask.—a tiny grain-elevator whistle stop between Regina and Saskatoon. Countless Canadian parents, teachers, children and parishioners pass these solemn markers daily, but only a few will have noticed their discreetly denoted connection to one of Canada’s most famous artists. 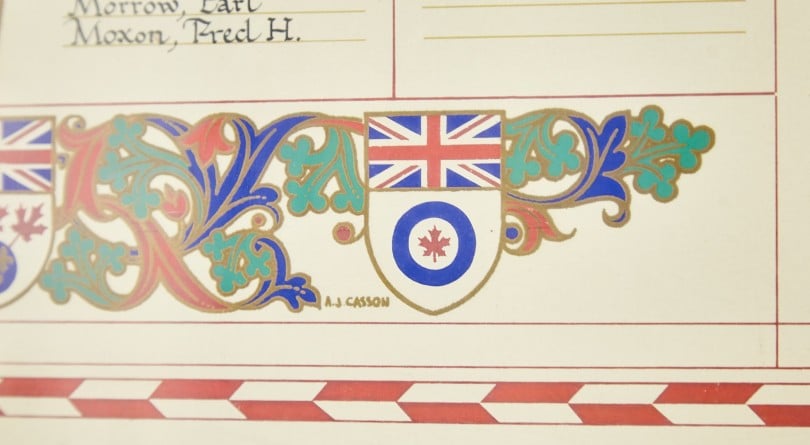 “A lot of schools mistakenly thought they had an A.J. Casson original,” observes Martha Jackson, a Toronto genealogist who has been collecting examples for almost 30 years and co-ordinates an online inventory. “They were designed by him, but they’re copies, not originals.”

Yet there’s far more to the little known story behind Casson’s WWII honour scrolls than just artistic provenance. Their existence is linked to both a mostly forgotten detail about Casson’s own life, as well as an almost unimaginably ambitious mid-century public art program that played an outsized role in ingraining the Group of Seven’s work in the Canadian cultural imagination.

By the early 1940s, most of the members of the Group—which disbanded in 1932—were middle-aged, their artistic reputations by then well established. But the story of the scrolls begins a generation earlier, in 1919, when Casson went to work for Franklin Carmichael at a commercial art company. As a young artist who needed to earn a living, Casson worked as a commercial designer, producing labels and advertisements, according to a biography prepared by guest curator Christopher Jackson for the McMichael Gallery.

Seven years later, Casson switched jobs, taking a management position with Sampson-Matthews, a prominent midtown Toronto lithography and commercial art company located on Yonge Street near Summerhill Avenue. While Casson by then enjoyed a high-profile reputation for his art, the well-paying job at Sampson-Matthews allowed him to build a house in Lawrence Park, an exclusive North Toronto neighbourhood.

As the war raged, Sampson-Matthew’s principals, as well as Casson and other Group alumni, including A.Y. Jackson, were eager to support the war effort, though they were too old to see active duty. According to Ian Sigvaldason and Scott Steedman, authors of the 2015 book Art for War and Peace, Jackson had served as an official war artist during the First World War. He came up with the idea of a partnership between Sampson-Matthews and the National Gallery, which would involve distributing thousands of silk screen prints of evocative Canadian paintings to the army camps housing troops in Canada as well those serving overseas.

With funding from the Department of National Defence, the National Gallery and corporate sponsors to cover the costs, Jackson, Casson and the Sampson-Matthews executives viewed the plan as a morale booster. According to a 1943 article in The Globe and Mail, the company produced 7,500 prints. Yet as Sigvaldason and Steedman point out, Casson and other Sampson-Matthews officials also saw the program as a way of making Canadian art widely available.

After the war ended, Sampson-Matthews expanded its art program, targeting schools and companies. Every year, it mailed out thousands of catalogues featuring a steadily expanding portfolio of silk screen reproductions, including many Group works, as well as paintings by Emily Carr, York Wilson and David Milne. Each had an order form, with prints selling for $6 or $8, or $10 to $15 framed, plus postage. (Unlike contemporary reproductions, silk screening isn’t a precise copy. Sampson-Matthews’ artists, Casson among them, reproduced the originals using fewer colours and less texture, and these copies, in turn, could be silk-screened, an industrial process involving the application of ink through a tight mesh.)

The company’s aggressive marketing and its low price point goes some distance in explaining why the corridors and classrooms of so many Canadian schools of a certain age were adorned with these prints. It may also explain why the Group’s distinctive landscapes became so well known to generations of students.

Besides the silk screen program, Casson also created some wartime commercial art, including Maclean’s covers and stylized posters promoting war bonds. (These read, “Give us the tools and we’ll finish the job.”)

While patriotic sentiment would hardly have been uncommon at that time, Casson may have had his own reasons for contributing his time and creativity to these ventures. According to his daughter Margaret Casson, her father had a half-brother, John, who was about 10 years his senior. John Casson signed up to serve in WWI and arrived in Europe in the summer of 1918. Within months, he endured a serious head injury and never really recovered. He died not long after the war ended. “[John] was kind of a big brother to my father,” Margaret told me recently. “He looked up to him and it was quite devastating when he died.”

In the aftermath of WWII, Casson took it upon himself to design a template for an honour scroll that could be filled out with veterans’ names from particular schools, congregations and other organizations. Both Margaret Casson and Scott Steedman say that Sampson-Matthews printed these scrolls in large numbers.

Casson remembers her father entering names on a few of them as he worked in the studio above the garage of the Lawrence Park house, where he lived for 60 years. With others, Sampson-Matthews’ calligraphers filled in the names.  Yet on some, the penmanship is rougher, she adds. “The scroll is so beautifully designed and executed but with some, the names were entered in messy writing.” All have Casson’s signature, which would have been part of the silk screen print. She says her father clearly took professional pride in creating the scrolls, but didn’t hang on to any of them. “To him, it was just work.” 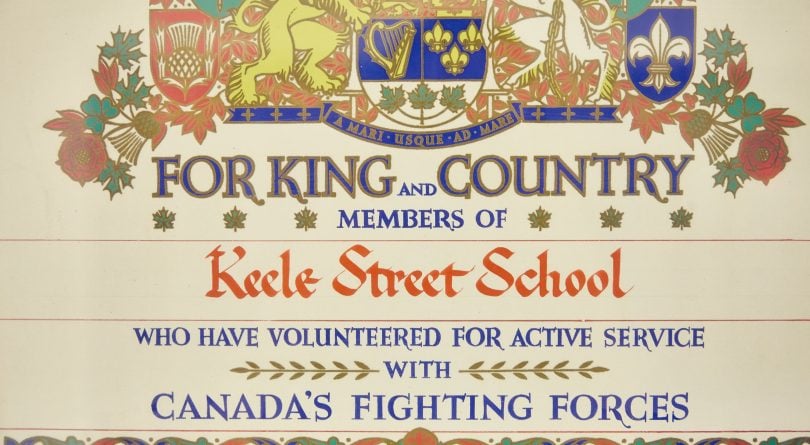 Detail of the honour scroll at Keele Street School in Toronto. (Photograph by Christie Vuong)

It’s not clear how these scrolls were distributed. Greg McKinnon’s theory is that they would have been ordered from the Department of National Defence. But the evidence is missing in action. Even experts on the work of the Group or Sampson-Matthews, including author David Silcox and Joyce Zemans, a York University professor, haven’t come across evidence of how the memorial program worked. Zemans, who has written extensively on Sampson-Matthews, says the catalogues she’s seen don’t include ordering information for the scrolls.

Humeniuk notes that such memorials must have been difficult to complete. While the former students itemized on the honour scrolls may have graduated several years before enlisting, a school’s administrators would have somehow had to gather information about which alumni went to war, and who among them died.

He’s also struck by the fact that it’s unlikely contemporary schools would commission similar memorials listing graduate-veterans who had fought in recent conflicts, like Afghanistan. Referring to world war combatants, he says: “These were people who had gone to the school and grew up and served. That acknowledgment of their service was brought into the world of these elementary and high school kids.”

Martha Jackson, the genealogist who documents the memorials, adds that while many of Casson’s scrolls still hang where they were mounted decades ago, others have disappeared as schools or churches were redeveloped or sold. Collectors may have acquired some. Indeed, Sampson-Matthews silk-screen landscape prints are now considered to be collector items.

Besides their artistry, she views the “King and Country” scrolls as lingering evidence of the rapidly receding social history of the neighbourhoods anchored by these schools and churches. On occasion, Jackson has spotted names of people who’d later become public figures, such as Barney Danson, who was Pierre Trudeau’s defence minister. “Then, they were just kids going off to war.

“For me,” she continues, “A.J. Casson is my hero because he gave us these beautiful memorials that are all over the place.” 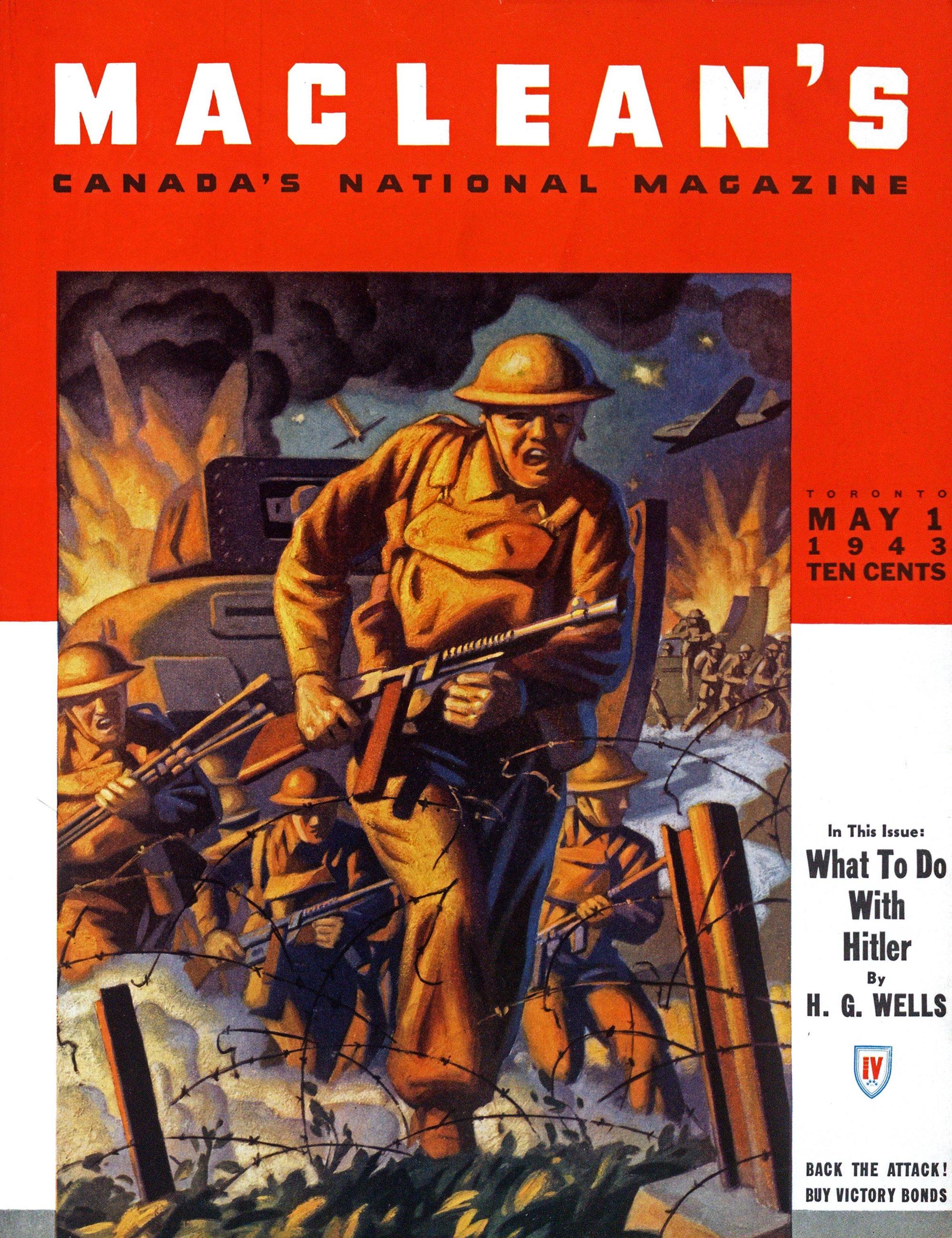 Correction: An earlier version of this post stated that Gregory Humeniuk visited his son’s school; in fact, he visited daughters’ elementary school.