Why Canada's casualties were so high in Normandy

The Normandy campaign, from D-Day until late August 1944, saw almost 5,000 Canadian soldiers perish. But that offensive, launched 75 years ago, jumpstarted the liberation of Western Europe. 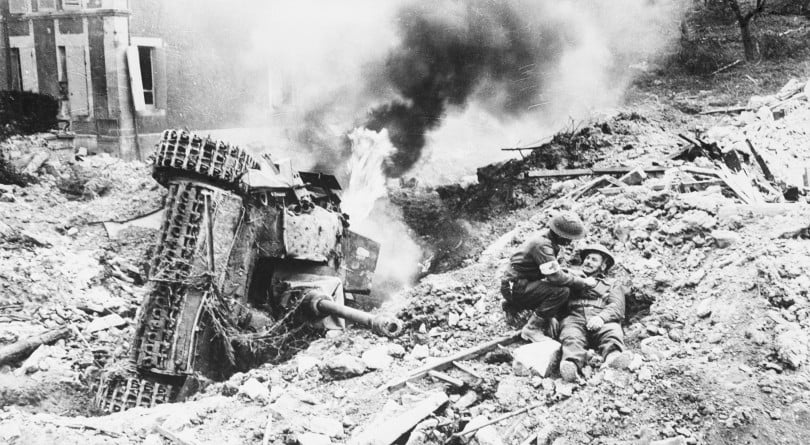 A Canadian Army medical corpsman tends to a Canadian soldier during the battle for Falaise on July 16, 1944 (Bettmann/Getty Images)

Normandy is full of the dead: 9,400 American graves in a huge cemetery just behind Omaha Beach, 23,000 German dead buried nearby, and 10,000 British graves to the east. In two Commonwealth War Graves Commission cemeteries, one at Bény-sur-Mer and the second at Bretteville-sur-Laize, almost 5,000 Canadian dead lie, their white tombstones arranged in neat rows. In all, between D-Day, June 6, 1944 and late August, when the Normandy campaign came to its end and the Germans were in full retreat eastward, more than 18,000 Canadian soldiers were killed, wounded or taken prisoner. The Normandy battlefields were marked by sheer butchery, the losses equal to the worst of those of the First World War.

The huge Allied invasion fleet had put 130,000 men ashore on D-Day along with 6,000 vehicles and 600 guns. Allied aircraft logged 14,000 sorties while the Luftwaffe could put a mere 250 aircraft in the air. But the Germans had tough, powerful panzer divisions in reach of the beaches and, although the Canadians successfully drove off the first counterattacks, their advance ground to a halt, the fighting quickly turning into a slugging match.

Facing the Canadians of the 3rd Infantry Division and 2nd Armoured Brigade in the first days after the invasion was the 12th SS Panzer Division made up of Hitler Youth teenagers led by NCOs and officers who had fought against the Red Army. Fanatical and well-trained, the Waffen SS troopers fought a vicious war, aided and abetted by their leaders. One hundred and fifty-six Canadian prisoners were murdered in cold blood in the immediate aftermath of D-Day, including two soldiers left on a roadway to be pulped by passing armoured vehicles and trucks, and a padre, Honorary Capt. Walter Brown. “My unit takes no prisoners,” Standartenführer Kurt Meyer had told his young soldiers, and at least some of them had obeyed.

The enemy had more than murderous, fanatical soldiers. Their panzers were vastly superior to the Allied tanks. The Canadians, like their allies, used the Sherman tank that ran on high-octane gasoline and had a nasty habit of catching fire if hit. “Ronsons,” the Germans called them, after the cigarette lighter. The SS divisions fielded many Panthers and Tigers, far better tanks with heavier armour and a bigger gun, and only good luck could see a Sherman survive in combat. The one advantage the Canadian armoured regiments had was that the Shermans were more road-worthy than the temperamental German panzers, and there were far more of them, replacements aplenty rolling off the U.S. production lines. The Germans could not match American productive capacity, and eventually sheer numbers told.

The Germans had another huge advantage—the 88 mm gun. Designed as an anti-aircraft weapon, the 88 proved to be a formidable weapon against Allied tanks. In attack after attack, the Sherman tanks brewed up under the 88s’ fire. When dug in and serviced by well-trained gun crews, the 88 mm dominated the battle space.

The fight to move inland from the initial D-Day lodgements was long and gruelling. The British had planned on liberating Caen on June 6; it would take until the middle of July, and the Canadian troops that entered the city found it flattened by Allied bombing with the Germans still holed up in the suburbs. Repeated efforts to push the enemy back proved costly and largely fruitless, the SS and Wehrmacht troops proving very hard to dislodge from their hold on Verrières Ridge south of Caen.

By the beginning of August, the Canadians had three formations in France, the 3rd Division that had been fighting since D-Day, the 2nd Infantry Division that had never quite recovered from its losses in the raid on Dieppe two years before, and the green, ill-trained 4th Armoured Division, all commanded by Lt.-Gen. Guy Simonds’ II Canadian Corps and Lt.-Gen. Harry Crerar’s First Canadian Army. Simonds had developed a plan—Operation Totalize—to break through the German defences with their dug-in panzers, 88 mm guns and soldiers from several divisions. He would attack at night on Aug. 8, forming his tanks into columns tightly packed together and with the lead infantry riding in rapidly converted Priests, self-propelled tracked artillery that had had their gun removed, an armoured roof welded on, and the ability to give the soldiers riding inside protection from all but direct hits. The plan was to reach the crossroads town of Falaise to cut off German units retreating ahead of American troops.

Unfortunately disrupted by Allied bombing that hit the attackers at the start of the operation, Totalize nonetheless stunned the enemy. The massive attack pushed 14 km through the defenders’ main positions with minimal casualties, although bypassed Germans continued to resist. But the advance stalled 11 km north of Falaise as units got lost in the dark, and Brigadeführer Kurt Meyer, now promoted to command the battered remnants of his 12th SS Panzer Division, stepped forward to play a decisive role. Meyer sited his 88s carefully, galvanized the rattled defenders and led them in slowing and stopping the advance of the Canadians. Nonetheless, Meyer knew the jig was up: “Further Canadian attacks will inevitably lead to a catastrophe,” he wrote. “We are at the end of our tether.”

Several days later, on Aug. 14, Simonds tried again with Operation Tractable, this time a huge daylight attack of two 150-tank squares heading toward Falaise behind a chemical smokescreen. With dreadful luck, the attack was again disrupted by errant Royal Air Force bombing: “They not only bombed us,” artillery officer Capt. T.J. Bell said, “but they machine-gunned us as well.” Faulty intelligence about the River Laison, expected to be slow moving and shallow, but which turned out to have wooded banks and a muddy bottom hard to ford, also crippled Tractable. It took fierce fighting for Simonds’ divisions to finally close what had become known as the Falaise Gap on Aug. 21. The Germans had fled eastward in large numbers before the Gap was slammed shut, but tens of thousands were killed by Allied guns and air attacks with thousands more taken prisoner.

The Normandy campaign was effectively at its end. The fighting had taken longer than anticipated, and it had cost the Allies 210,000 casualties. Hitler’s Wehrmacht and SS had suffered some 450,000 men killed, wounded, and captured, and the road to Paris was open, the enemy in full flight. D-Day and the bloody victories in the Norman countryside had begun the liberation of Western Europe.

The cost in Canadian lives had been terrible. The soldiers, almost all untried in action, had learned on the job but suffered heavily in the process. Their equipment was too frequently inferior to the Germans’, their fighting skills as well. But they had prevailed, achieving a major victory against the Nazis.

Captured by the Belgian Resistance in November 1944, Kurt Meyer was tried by a Canadian military court in December 1945 for the murders committed by his teenage soldiers. He was found guilty and sentenced to death, but Meyer’s sentence was commuted to life imprisonment. A true-believing Nazi to the end, he was released from New Brunswick’s Dorchester Penitentiary in 1951 and served three more years in a British military prison in Germany. Freed in 1954, Meyer became a beer salesman supplying Canadian NATO troops stationed in West Germany. He died in 1961.