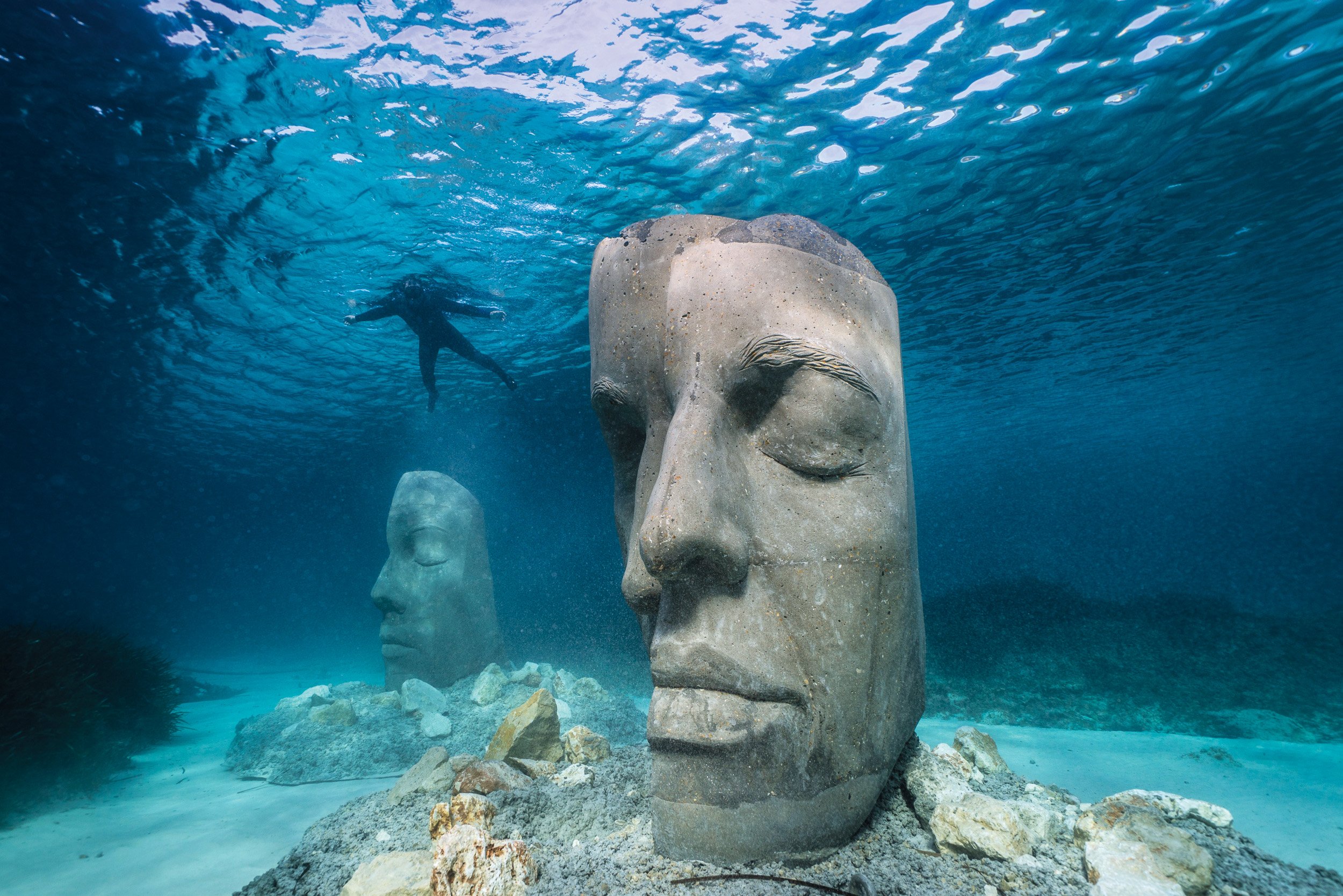 Sculptures at the Cannes Underwater Eco-Museum in France (Courtesy of @jasondecairestaylor /www.underwatersculpture.com)

Snorkelling or scuba diving off the coast of Cancún, Mexico, is a great way to escape the world’s cares and concerns. Beneath shimmering turquoise waters, an army of spectral sculptures covered in algae and crustaceans is waiting to dazzle you. But the artwork is also there to remind you of the potentially cataclysmic costs of your adventures.

Unlike a lot of contemporary art, there is not much ambiguity to the works on display at the Museo Subacuático de Arte (MUSA), where you will see an array of villains and victims cast in non-toxic, pH-neutral, marine-grade cement. The Banker portrays a suited figure with his head buried in the seabed and the cavern formed by his raised posterior serving as a habitat for marine flora and fauna. The Inheritance shows a young boy whose shoulders are hunched in disconsolation, sitting on an upturned bucket surveying representations of the type of man-made debris that increasingly befouls our water bodies: foam cups, plastic bags and glass bottles. 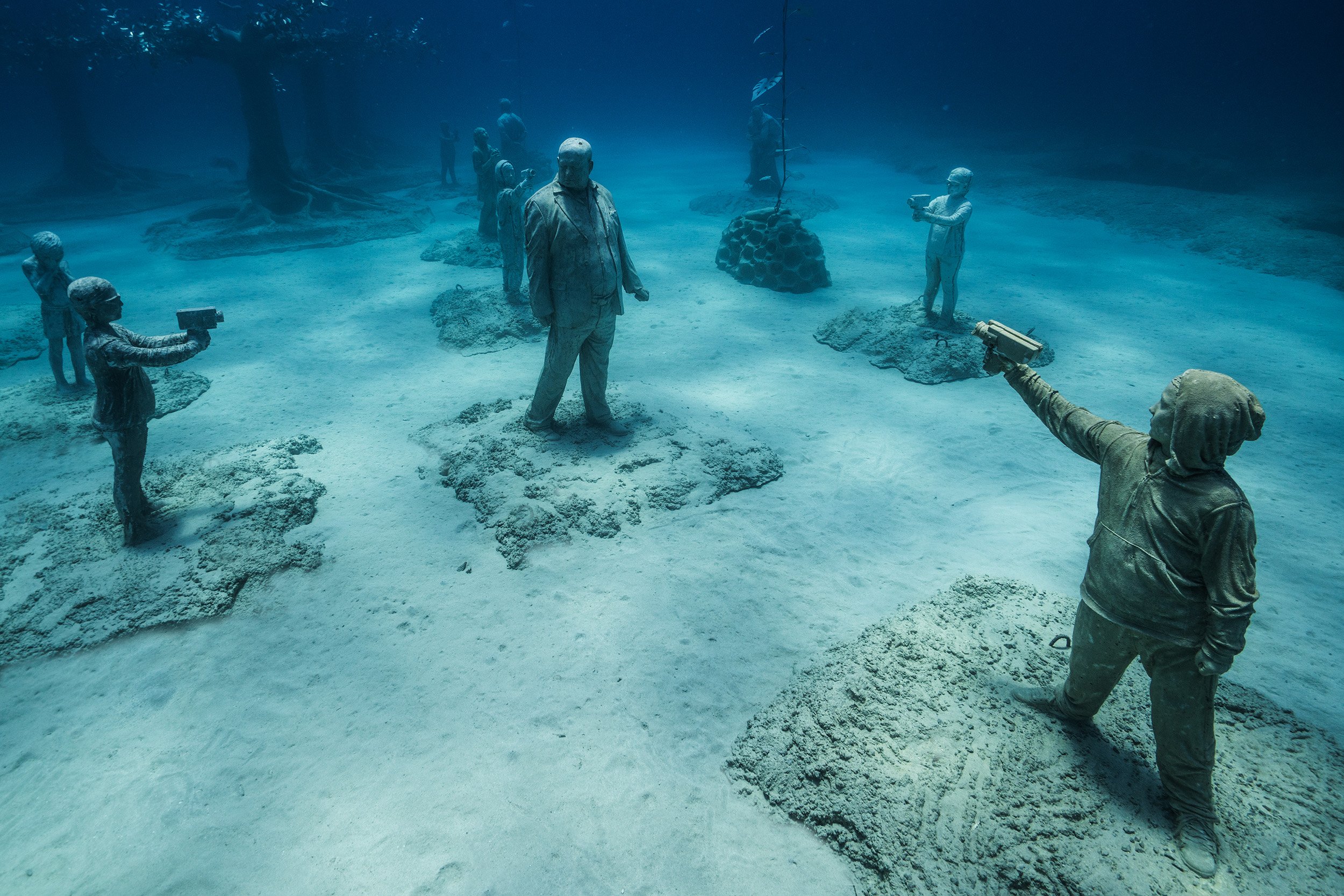 With their heavy gear and big fins, scuba divers are a threat to fragile marine environments such as coral reefs—home to at least a quarter of marine species—as well as to historic shipwrecks. According to the Reef-World Foundation, an estimated 88 per cent of divers damage coral reefs during a dive. And these biodiverse ecosystems are disappearing fast—approximately 14 per cent of the world’s coral reefs have been lost since 2009, according to a new report by the Global Coral Reef Monitoring Network.

That’s why, in popular vacation spots such as Cancún and Tuscany, activist artists are working to get humanity to change course before it’s too late. They are sculpting major artworks that highlight the serious environmental crises facing local water bodies, while at the same time providing new habitats for aquatic life in areas being overrun by tourists and industrial-scale fishing operations. 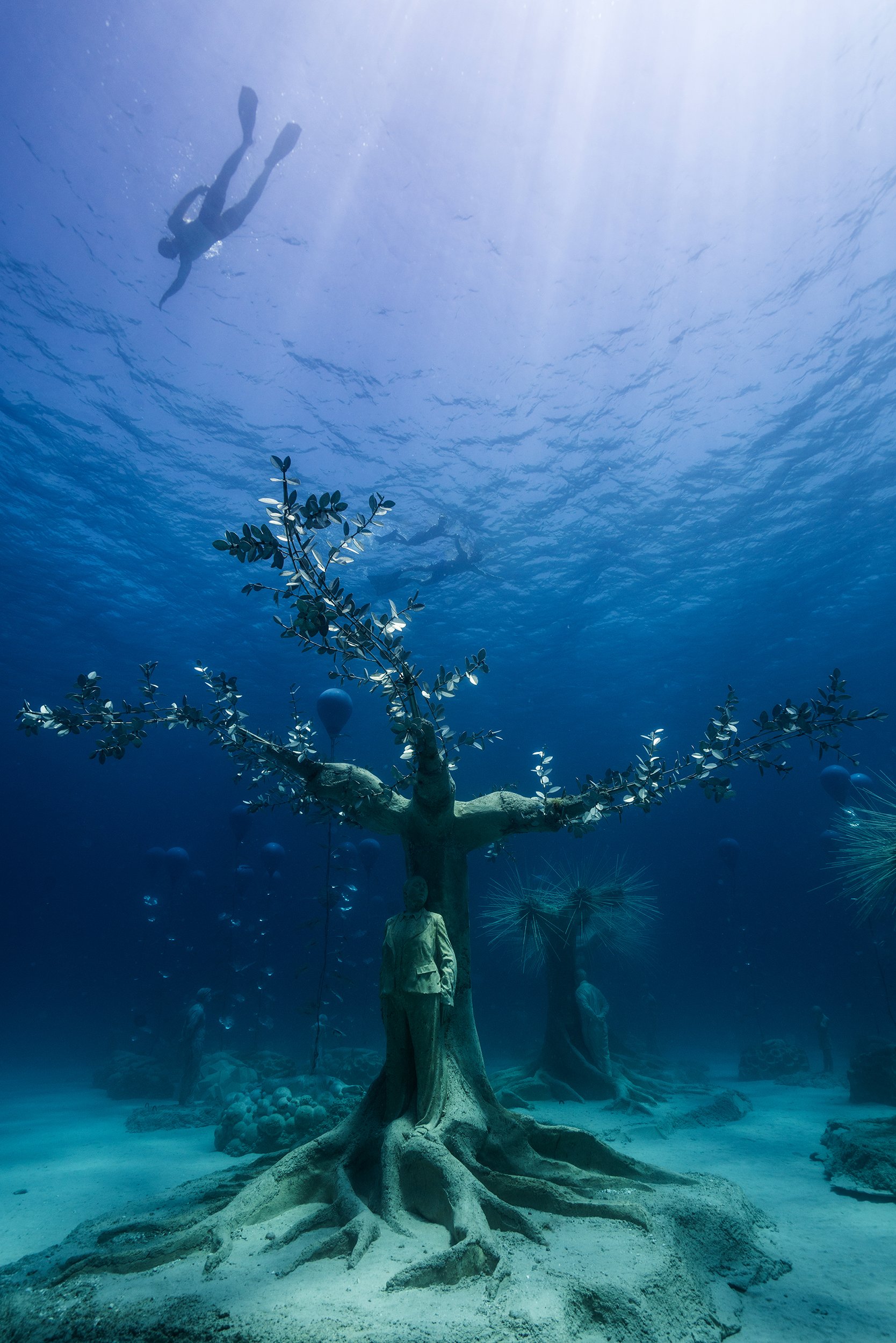 MUSA is the brainchild of Jason deCaires Taylor, a sculptor and diver who in 2005 pioneered the concept of using underwater sculpture gardens to draw divers away from fragile coral reefs in Grenada, where he was working as a scuba instructor after finishing art school in England. “The sculpture park attracted a lot of attention,” he says, “and then the government started to realize the value of the blue economy and began to protect the coastline.”

After his successful projects in the Caribbean, deCaires Taylor began taking his message around the globe. His projects include a “tidal installation” in the Maldives that can be appreciated from the shoreline and a sculpture of an Aboriginal girl off the coast of Australia embedded with temperature-sensitive LEDs that turn a dark crimson red when the coral reefs are facing a dangerous condition known as “coral bleaching.”

DeCaires Taylor’s work has inspired other artist activists, such as the Canadian sculptor and diver David Sheridan, who helped found Centeen Memorial Dive Park along the St. Lawrence River in Brockville, Ont. That sculpture garden, which Sheridan began designing with students from an art class he taught at Thousand Islands Secondary School in Brockville, comprises about 20 sculptures, including a giant five-tonne concrete hand and a sculpture of Sheridan’s wife that can safely be used for dive manoeuvres.

Sheridan was motivated to build the dive park out of concern about the damage novice scuba divers were causing to the many historic shipwrecks found on the bottom of the St. Lawrence River. “We needed to create an attraction for divers not to hang out on the wrecks,” he says. “When you are hanging out on the gunnel of a 100-year-old schooner, something is going to break off.”

Sheridan says he supports divers exploring historic shipwrecks, but adds that they need to first learn how to dive responsibly. “It’s about controlling your buoyancy, and not using your fins to push off and kicking up a lot of dust,” he says. “There are a lot of educational components to this.”

In 2015, in the waters of the Mediterranean Sea off Tuscany’s Maremma Regional Park, a local non-profit organization began deploying the first of 39 massive sculptures that call attention to the environmentally exploitive and illegal practice of bottom trawling, which involves ships pulling enormous drag nets through the water and in the process completely wiping out fish habitats.

The garden, which includes a classically sculpted marble face crying a tear by the acclaimed English sculptor Emily Young, is literally an impediment to trawling because the drag nets snag on the sculptures and rip apart.

Young, who keeps a studio in Tuscany, says that although local fishers and activists have long used concrete blocks to stop the trawlers, the underwater sculpture park has helped bring international attention to their cause. “They said, ‘Let’s make something really beautiful about destructive fishing. If you make these sculptures, then people will come and [be] alerted.’” 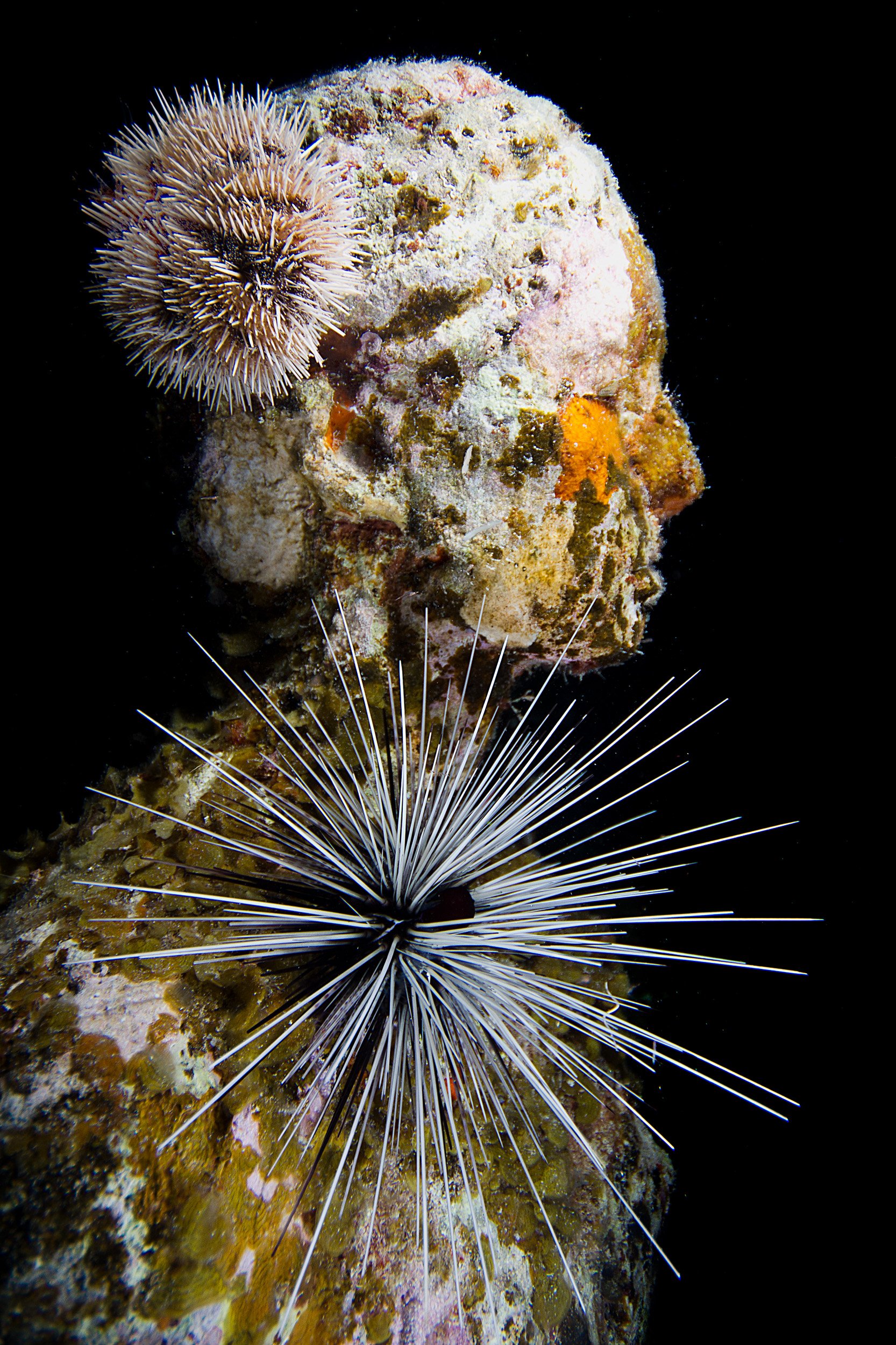 One of the sculptures that is part of Silent Evolution located in Mexico at the Museo Subacuático de Arte (MUSA). The image was taken during a night dive and shows the coral growth and marine life living on the sculptures. (Courtesy of Jason deCaires Taylor)

This article appears in print in the February 2022 issue of Maclean’s magazine with the headline, “Dropped in the ocean.” Subscribe to the monthly print magazine here.