In Ottawa, the occasion was marked by the return of soldiers to the War Memorial—the first time since Oct. 23

On Easter Monday in 1917, Canada made itself a wartime name on a rocky ridge in northern France. The battle on Vimy was one of the First World War’s most significant victories, but came with significant loss: nearly 3,600 Canadians died in the battle.

“Ninety-eight years later, we continue to acknowledge with pride Canada’s role in defending the ideals of freedom, democracy and the rule of law—the very foundations of our own nation,” said Erin O’Toole, Canada’s minister of veterans affairs, in a prepared statement. “We gratefully acknowledge and honour the courage and the cost paid by those brave Canadians 98 years ago, and we commit them to our memory. We will always remember.”

Indeed, Canadians took the time to remember in Ottawa, where our national war memorial—stained with blood on Oct. 23 when Cpl. Nathan Cirillo was killed by a gunman while standing on guard—again featured soldiers to stand sentry for the first time since that tragic day.

From 2007: The day the earth shook: Award-winning novelist Joseph Boyden conjures the dead in Vimy

From 2005: ‘Like a scene out Dante’: Brian Bethune’s elegiac essay on Vimy and the lives lost 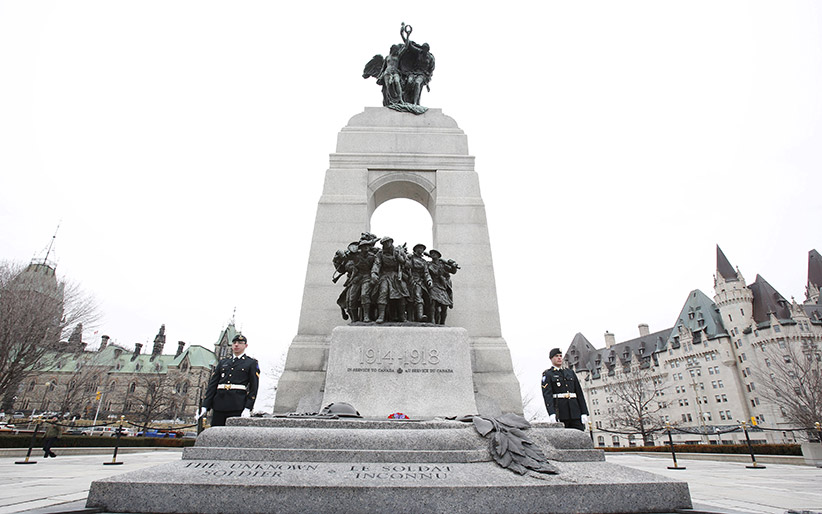 Soldiers stand guard at the National War Memorial in Ottawa, April 9, 2015. Soldiers returned to their posts at Canada's National War Memorial on Thursday for the first time since a shocking fatal attack last October, but the ceremonial guards are now protected by armed police and separated from the public. (Patrick Doyle/Reuters)