For Canada's 151st birthday, a look at how the nation’s cities have grown and changed through remarkable archive photos 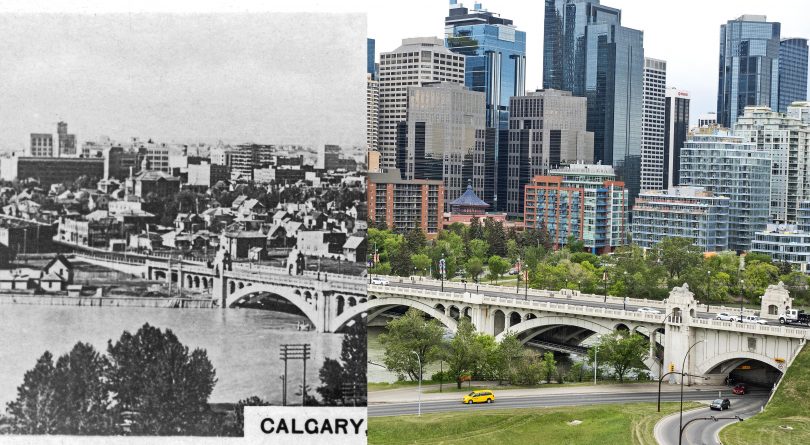 There are two main ways to look at a then-and-now pairing of photos—marvel at how much has changed or fasten on to what remains the same. In a country like ours, change has the upper hand.

In the photos below, use the slider to turn the past into the present.

Check out the corner of Bloor and Yonge, once dubbed “the crossroads of Canada” by self-satisﬁed Torontonians, where the Stollerys menswear store long seemed as permanent as a granite outcropping. It’s gone now, leaving a gap ready for the next tower to take root. Searchers for the reassurance of continuity, or for a decent sports jacket, must look elsewhere.

In 1856, Wellington Street East was a dirt road marked by the tracks of horses and wagons. Since then, rolling stock has replaced the livestock, and the downtown core has exploded in the background.

In 1907, well-dressed Torontonians flocked to Scarboro Beach Park’s amusements; the waterfront was later bought by the city and is now a public beach.

In 1922, Toronto’s Yonge and Bloor was a low-rise, cobblestoned intersection overseen by a busby-wearing ofﬁcer; now, it’s a hotbed of vertical development

In 1946, Commerce Court North (left) was the tallest building in the British Empire. Many of the ferries operating 72 years ago are still shuttling people across the harbour to the Toronto Islands.

In 1946, Queens Quay West provided a magnificent view of the Royal York Hotel. It’s now thoroughly blocked by the Gardiner Expressway and a throng of gleaming skyscrapers.

The southwest corner of Yonge and Dundas hosted a variety of storefronts in 1972. Five years later, they’d all be knocked down and replaced by the Eaton Centre, now North America’s busiest mall.

There’s the Bonsecours Market dome, punctuating an archival print from 1884, still gleaming silvery in our recent photo. But the close-backed portside buildings, themselves scarcely altered, cast their stoic gaze over an entirely different scene: the great port itself has moved east, out of their line of sight, as if dragged down the St. Lawrence by the last of those tall-masted ships.

Mont Royal’s view of the St. Lawrence River has been obscured since the 1870s. A modest city dotted with church spires has turned into a bustling commercial metropolis.

In 1884, Montreal’s Old Port was a hive of industrial activity and trade; today, it’s a charming hub of entertainments and refreshments.

The Maisonneuve Monument and the Bank of Montreal head office in the Place d’Armes are little changed since 1896, but the backdrop is now a looming wall of concrete.

A horse and buggy is still trundling around the Bank of Montreal, but these days it’s a nostalgia trip, whereas in 1910, they taxied working people around town.

The Bank of Nova Scotia has been rebranded as Scotiabank since this photo was taken in 1939, and Montreal has grown up around it.

By the 1960s, Montreal had started to grow vertically, but since then, many more of its tree-lined downtown residential neighbourhoods have been replaced with high-rises.

In 1966, Moshe Safdie’s Habitat housing complex was still being built ahead of its reveal at Expo ’67. It remains mostly unchanged today, still an architectural landmark.

RELATED: See Fort McMurray in photos then and now

Relying on old-time streetscapes and romantic vistas for a sense of what lasts, though, is a sure way to miss more recent bids for timelessness. The striking modern building that Vancouver’s booming Coal Harbour has lately sprung up around dates from only 1969. Yet its architects aspired to build permanence: the Qube, as it’s called, is touted as one of the city’s most earthquake-proof structures. So look again, and now imagine the Qube intact after the West Coast gets a good shaking, as geologists warn us it one day must.

Dressed-up Vancouverites attend a Hastings Street parade in the 1910s.

In 1932, Granville Street was a broad and busy thoroughfare. Much of it has since been given over to pedestrians.

Pender Street in Chinatown has retained its awnings and mood lighting since 1935.

Vancouver’s Chinatown has lost some of its glitz since its ’60s heyday.

The earthquake-resistant Qube, built in 1969, two years before this photos was taken, was transformed into condos in 2005.

RELATED: Calgary floods, then and now

Sometimes the whole point of a place is to stare down time. The Gothic Revival style of Parliament Hill evokes agelessness by echoing the forms of medieval architecture. Even so, the two photos here, taken from the Peace Tower (completed in 1927) out over the rooftop ironwork of the Library of Parliament (opened in 1876), tell a tale of change. Seen in 1965, the Ottawa River is full of timber; today, the log booms are gone. If the view is prettier now for the tourists taking it in, what’s lost is the reminder that Canada’s capital is, deep down, a lumber town.

The Rideau Canal has had some safety features added, but it’s still as picturesque as it was in 1910.

Rideau Street has added some high-rises since 1925, but it’s charming low-rises are still recognizable through the chaos of construction.

The view from the Press Gallery is still dominated by the Alexandra Bridge, which links Ottawa and Gatineau.

This view from the Peace Tower reveals how the Ottawa River has changed in the past half-century. It is no longer a conduit for timber, and the Canadian Museum of History has replaced the industrial waterfront.

The Ottawa photos reveal a great river that’s more placid today than when it was more plainly an artery for resource wealth. We only imagine change flowing from less crowded to more congested, bucolic to bustling, but the reverse happens, too. Yesteryear’s throng of canoe enthusiasts gives way to today’s solitary dog-walker. A working port’s jostling stevedores are replaced by a historic port’s strolling tourists. And that’s another thing about then-and-now photos. After we’ve parsed what’s happened to the places, we look with even more interest to see what’s changed—and not—about the people who’ve strayed into the frame.

Carts filled with sorghum—a reminder of an agricultural past—make their way through downtown Halifax circa 1880.

Halifax’s Citadel Hill has lost its artillery and gained high-rises since 1939.

The picket fence has come down, as have the curtains, and the wagon has been replaced with a scooter, but this house on Hennessey Street is still going strong.

In 1964, Sackville and Hollis featured a cobbler and a drugstore. Now it’s the Hollis hotel.

In 1968, buildings along Barrington Street were being demolished to make way for the Cogswell Interchange. Now obsolete and pedestrian-unfriendly, it may soon be replaced with a regular street grid.

The Centre Street Bridge, built in 1916, is now backed by a forest of skyscrapers.

The Devenish complex on 17th Avenue (centre of both photos) was built in 1911 to be the most luxurious apartments in the West. It’s now occupied by boutiques and offices.

In 1988, the Olympic Saddledome hosted figure skating and ice hockey at the 1988 Winter Olympics. It’s still home to the Calgary Flames.

The Bank of Montreal, an enduring landmark at the corner of Portage and Main.

The domed building at Portage and Garry housed the Bank of Nova Scotia in 1939, and now hosts the Vital Statistics Agency. It’s one of few recognizable building on a much-changed street.

The graveyard of this well-preserved church in West Kildonan holds pioneers, frontiersmen and officers who fought in the Northwest Rebellion.

The view down Portage Street, relatively unchanged from 1955 to now.