In the tower, the poppies flow: Inside an extraordinary art project

A dramatic art installation at the Tower of London pays tribute to 888,246 fallen soldiers 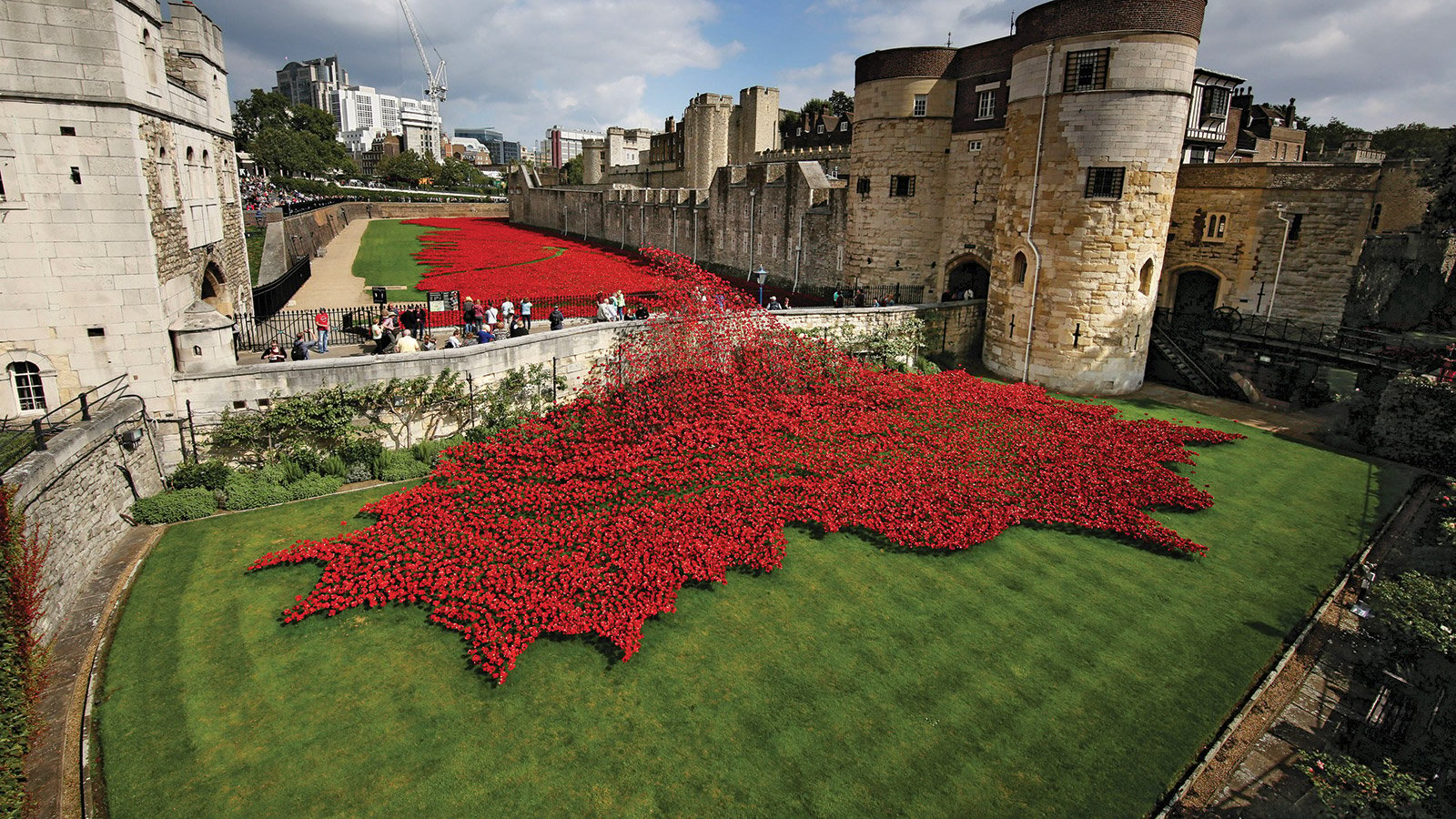 For nearly 1,000 years, the Tower of London has been a hulking fortress and prison on the bank of the Thames River. Anne Boleyn was beheaded on Tower Green and Nazi Rudolf Hess was imprisoned there during the Second World War, while the tower’s treasures, including the Crown jewels, are guarded by a permanent military detachment. Now its formidable defences are being transformed by a dramatic art installation.

For almost four months, five days a week, hundreds of volunteers have been planting thousands of ceramic poppies in drifts across the tower’s deep, grass-covered moat. Swaths of the metal-stemmed flowers seem to flow down from the thick walls, while others soar on a wave high above a bridge. Started on June 17, it will be completed on Nov. 11, Remembrance Day, when exactly 888,246 poppies will fill the moat—one for each British and Commonwealth fatality of the First World War. The installation’s mammoth scale echoes and honours the war’s enormous toll. 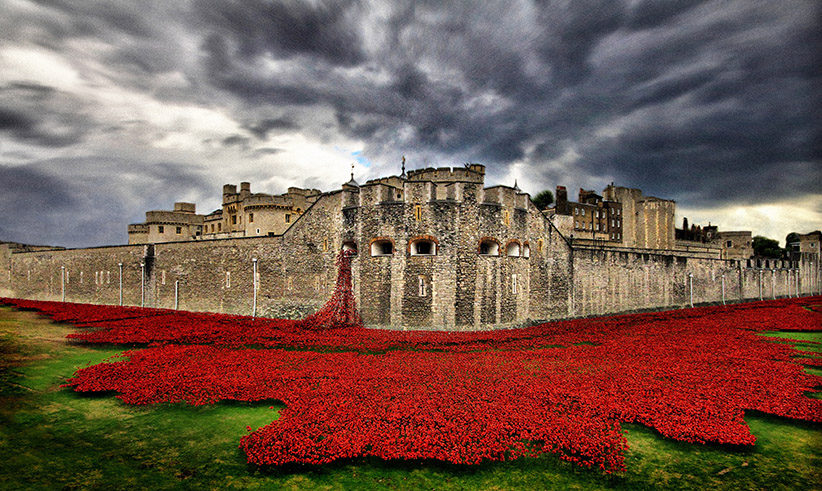 It’s not the first large-scale event put on by Historic Royal Palaces (HRP), the independent charity that runs Britain’s unoccupied royal palaces. At Kensington Palace, artists, including designer Vivienne Westwood, have created wildly contemporary installations. Yet the poppies have captured people’s interest like no other, says HRP’s Polly Richards. Thousands regularly come to see the planting, as well as the evening Roll of Honour, when 200 names of the dead, put forward by the public, are read from within the moat.

Even the tower’s famous yeoman warders—commonly known as Beefeaters—are in awe. “I get goose pimples every time I walk by it,” says Jim Duncan, the effort’s production manager. “If there is a bit of a wind going, you hear the tinkling of the poppies as they touch each other. Each poppy represents the life of a fallen soldier. To see them move, it’s a bit like reveille in the morning—someone is waking them up.”

The installation is the creation of Paul Cummins, a Derbyshire-based artist known for creating large ceramic floral displays. He was inspired by a line in a will of an unidentified local man who died during the war. Describing the battlefields, the soldier wrote, “The blood-swept lands and seas of red, where angels fear to tread.” That first clause is now the title of the installation.

As for the location, the Tower of London’s moat was the only spot that would feasibly, and safely, handle such slow-growing, delicate art on such a massive scale. Its fortifications mean the public can see the poppies, but can’t get near them. In 1914, the moat was also a training ground for eager military volunteers.

The poppies themselves are modelled on Papaver rhoeas, the flouncy poppy of Flanders Fields, where Col. John McCrae wrote his famous poem. Cummins’s instructions to the three British potteries turning his vision into ceramics were simple: Each flower had to be handmade and unique. But his idea would have remained on paper without a 20,000-strong army of volunteers from as far away as Vietnam and Brazil pouring into the tower. On Sept. 6, it was the turn of Caroline Auckland, a writer and photographer from Kent, whose team of 200 volunteers assembled and planted 7,000 poppies. Like many, she lost relatives in the war. So, as she gently tapped poppies into the grounds, Auckland whispered, “This is for you.”

Every few days stage designer Tom Piper charts out a new edge for the poppies so the installation always has a flowing, watery look, explains Richards. Within that stricture, volunteers do what they want. “They aren’t firmly directed at how to plant,” she says. “They have to look at what’s been done before to get their feel of what height of poppy to use to make it feel natural.”

After Nov. 11, volunteers will re-enter the moat to pack up the poppies, which are being sold online for $45 each. (More than 550,000 have been sold, with part of the proceeds going to six military-related charities.) Auckland will help, having found her first stint profoundly moving. She recalls seeing one or two poppies that had fallen over. “You think ‘it doesn’t matter,’ but it does. It’s all about the fallen.”