Ken Hermann discovered the flower sellers of Kolkata’s bustling Malik Ghat market as a tourist, not a photographer. He was taking a day off from shooting portraits of Indian coal miners when he spotted hundreds of the merchants, draped in robes of orange petals and carrying garlands of green leaves on their heads. “It looks like they kind of wear them,” says the Copenhagen-based photographer. “That caught my interest right away.” 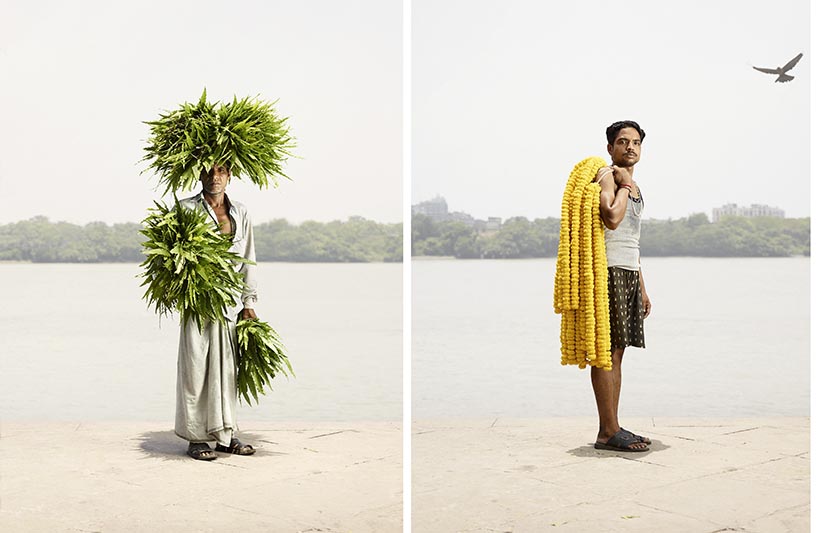 Without time for a proper shoot, Hermann moved on to other projects, but “I couldn’t really get rid of the idea,” he says. “I just had to do it.” So, two years after that initial visit, he returned to the market, camera in hand, and began searching for subjects. He enlisted an Indian photographer and well-known flower seller to help translate (the merchants speak mostly Hindi and Bengali), but it was still a hard sell. “They are really busy,” Hermann explains, “and they are afraid of losing money.”

Because Hermann chose to take the photos between noon and 3 p.m.—to give them an “overexposed, hazy kind of look”—the heat was another challenge. Without constant watering, the flowers often withered in 15 minutes of direct sunlight. “It gets warm,” he says. “My jeans were completely soaked.”

The photos have a surreal aesthetic, but the expressions are all natural. “In our part of the world, people tend to put on a big smile,” Hermann says. “In India, they tend to get a little stiff. They don’t smile. They just stand and look almost angry. I kind of like that—the old-school me-getting-my-portrait-done look.”