Photo essay: A day in the life of a living goddess 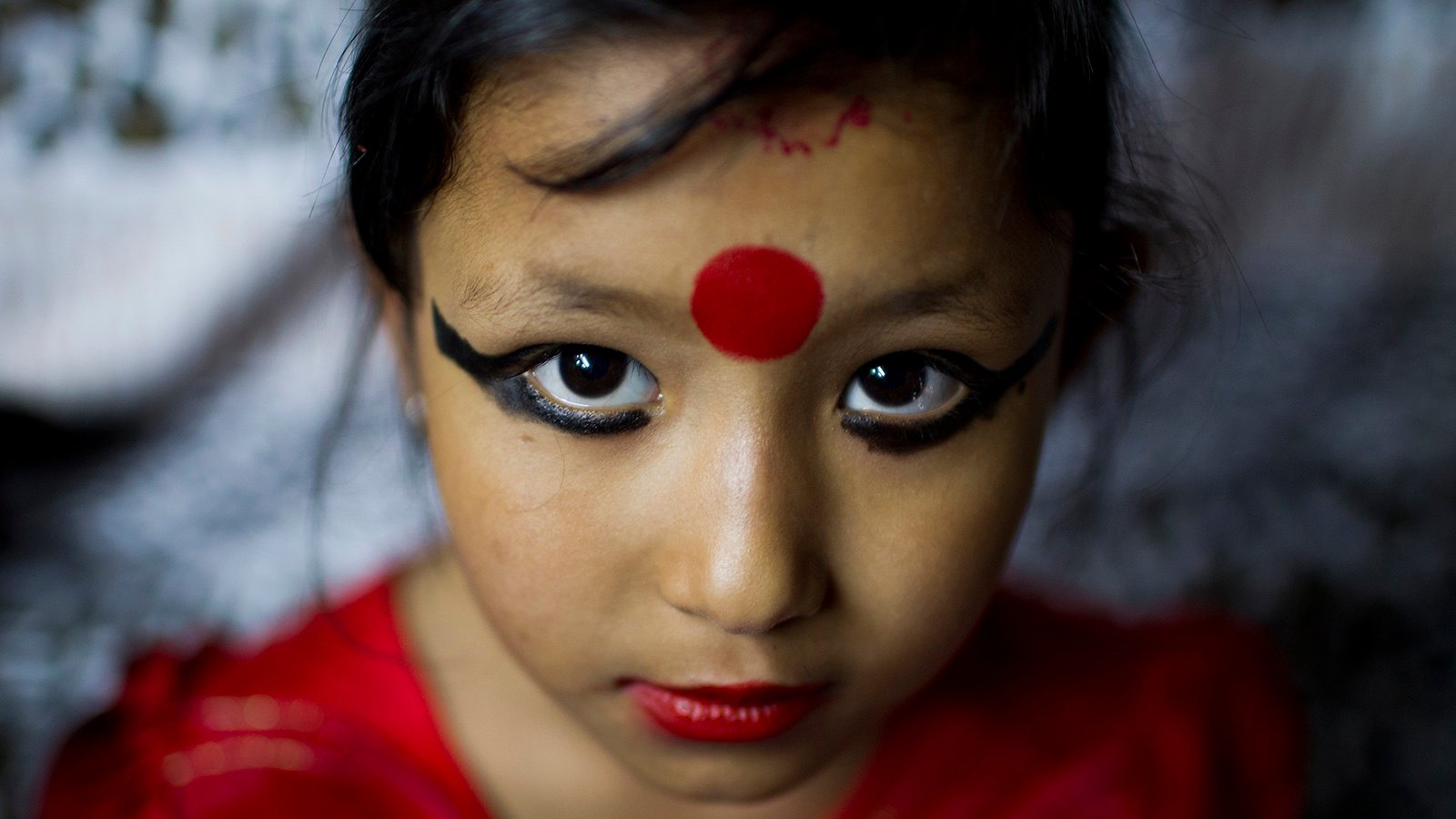 In some religions, deities are strictly relegated to the spiritual realm, never actually seen by mortal devotees on Earth. Yet in Kathmandu, Nepal, you can walk up a bustling street to find a young girl called the “Kumari,” believed to be the human incarnation of Durga, the demon-slaying Hindu goddess of power. Tourists flock to get a glimpse of the Kumari atop her heavily decorated throne, and locals regularly present her with fruit, flowers and money, hoping she will bestow good luck and prosperity upon them.

Roughly translated as “virgins” or “prepubescent girls,” the Kumaris are living goddesses handpicked by a council of high priests based on rigorous criteria, similar to how the Dalai Lama is appointed. A Kumari must be healthy, dark-eyed and dark-haired with no physical imperfections, and pass several tests—including being placed in a dark room with dead animals—to prove she isn’t too timid to take on the role. Once her first menstrual cycle begins, though, she is forced into retirement, as it’s believed that is when the goddess vacates her body, and the search for a new Kumari begins. There may be as many as 13 other Kumari goddesses in cities across Nepal, but the most revered one, the Royal Kumari, lives in the centre of Kathmandu.

While a Kumari’s status in Nepalese society may be higher than even the president’s, she isn’t allowed to walk, touch or talk to anyone outside her family, in order to preserve her purity. For the youngest Kumaris, this means they will not learn to walk until they are retired as teenagers. Every day, the Kumari’s mother dresses her in red clothing, applies dark makeup around her eyes and lips, and paints special designs on her forehead. She spends most of her day in isolation, but is carried outside a few times a year by family members or priests for special ceremonies, where she’s worshipped by thousands of Buddhists and Hindus alike. While virgin worship has existed in Nepal for millennia, this particular form started around the 17th century. 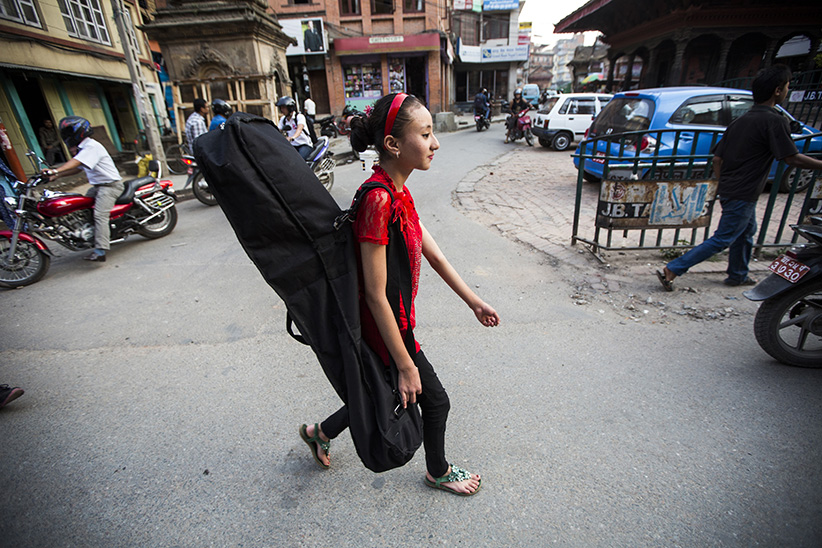 Samita Bajracharya walks carrying an Indian classic music instrument called a sarod on her way for her first public performance in Patan, Nepal, on May 12, 2014. Samita enjoys playing Sarod classical music, which she has been learning from Nepal's famous musician Suresh Raj Bajracharya. (Narendra Shrestha/EPA)

As a young boy, Nepalese photographer Narenda Shrestha would travel with his parents to worship the Royal Kumari. He was always curious to learn more about her inner life and what she was thinking about. In 2010, eight-year-old Samita Bajracharya, a girl from a poor family in Patan, was chosen from seven others to become the new Kumari of Patan, the second-most important Kumari in the country. “I always wanted to do a photo story of her, one that showed a different side of the Kumari,” Shrestha says. By a stroke of luck, he was able to get rare access to Samita: One of Shrestha’s friends was close with the Kumari’s mother, who agreed to let the photographer follow her daughter and document her time as a living goddess. “Before knowing her closely, I also thought she was a god and tried to maintain my distance,” he says. “But I slowly came to realize she is just a normal little girl.”

This past March, Samita retired and was replaced by seven-year-old Unikia Bajracharya. Samita had to spend 12 days in a room purifying herself and getting ready to transition back to regular life. The next morning, Samita was carried to the river to let her hair down and wash the paint off her forehead. When Shrestha asked her how she was feeling now that she was no longer a god, she replied: “Yesterday I was a living god of Nepal, but now I am a normal girl. I’m a little sad I’m not a god anymore.” The former goddess now attends school and takes music lessons. Although it took several weeks of trying, she can finally walk again on her own.